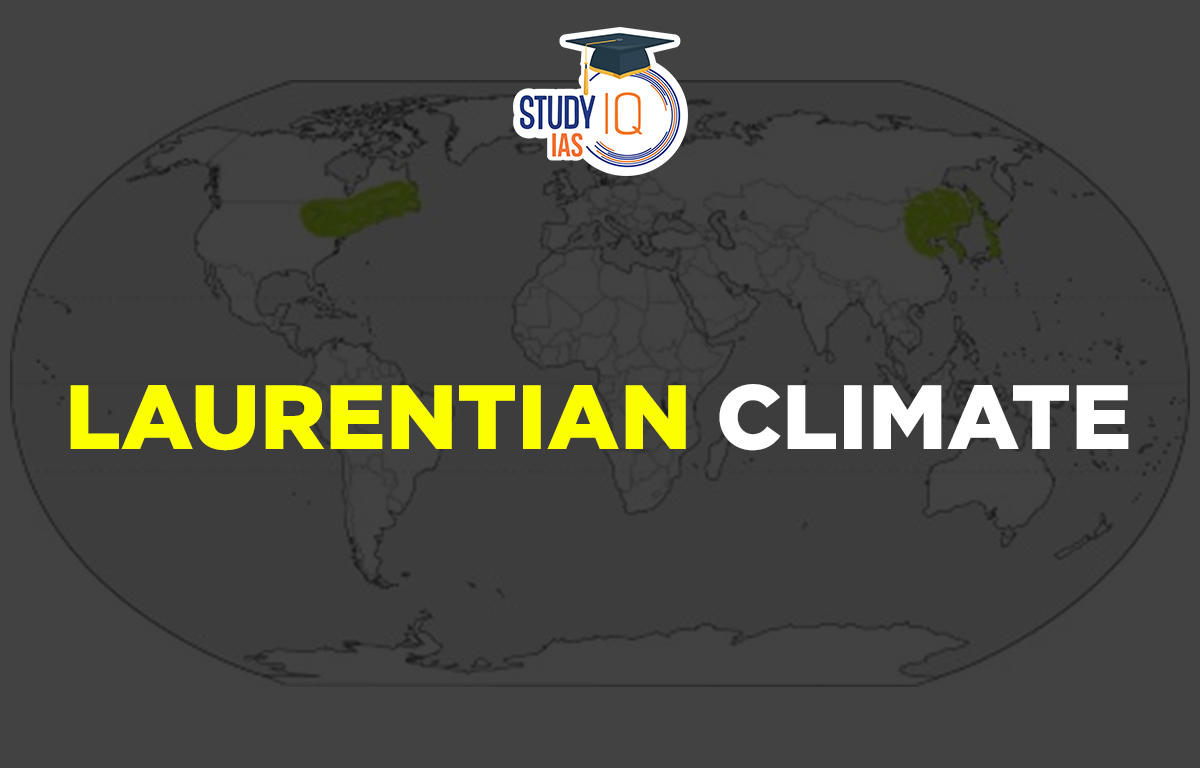 The Laurentian climate in China is generally described as having a “Cool Temperate Monsoon Climate.” It has a wide yearly temperature range and an extremely long, frigid winter. Snow makes up a large portion of the wintertime precipitation in northern China, Korea, and Hokkaido, Japan.

The cool Temperate Eastern Margin or Laurentian Climate is an intermediate type of climate between the British and Siberian climates. It has the characteristics of marine and continental climates. The Laurentian-type climate is found in only two areas:

The Laurentian climate is characterized by cold, dry winters and hot, humid summers. Winter temperatures are much lower than the freezing point, and the snow is very deep. Summers are as hot as the tropics (21° – 27 C), and summer becomes hotter without the cooling effects of off-shore cold currents in the Arctic. Despite the year-round rainfall, the weather is characterized by a distinct summer maximum.  With 30 to 60 inches of annual rain, two-thirds of the rain falls in the summer. Winters are dry and cold because the winds are dry westerly winds blowing from the continent’s interior.

Cold, dry winters and hot, rainy summers define the climate. Snowfall during the winter is pretty normal given the below-freezing temperatures. The summers are about 25 °C, which is tropical warm.

Rainfall is most abundant in the summer, brought on by easterly breezes from the oceans. The annual rainfall ranges from 75 to 150 cm, with the summer months accounting for two-thirds of the total. Winters are dominated by dry westerlies that originate in the interiors of continents.

The main vegetation of the Laurentian-type climate is cold temperate forests. Moist air from high rainfall, hot summers, and fog are conducive to all trees’ growth. Generally, the wild conifer is parallel to the latitude 50 ° N latitude. Oak, beech, maple, and birch are the main trees.

Cool temperate woodland makes up the majority of the vegetation. Tree development is aided by a lot of rain, warm summers, and damp air brought on by fog. North of 50°N latitude, forests are primarily coniferous. Coniferous forests are a continuation of the vast coniferous belt of the taiga in the Asiatic region (eastern Siberia and Korea).

The two main export commodities are fish and timber. The coniferous forests of fir, spruce, and larch are heavily exploited. The St. Lawrence River aids in export, but the heart of Canada’s timber and wood pulp sector is in Eastern Canada. Coniferous woodlands disappear south of latitude 50°N and are replaced by deciduous forests. The most prevalent trees are birch, oak, beech, and maple.

The commercial potential of these forests is considerably increased by the nearly uniform species of trees [pure stands] and the dominance of just a few species. To harvest temperate hardwood, they have been extensively felled. Both temperate hardwood and temperate softwood are obtained from places with a Laurentian climate. The woods of Manchuria, Korea, and Japan have been cleared to make room for cultivation.

The wood and allied wood, paper, and pulp industries are the most important activities. Agriculture is not as necessary due to the severity of winter and its length. Fortunately, the impact of the sea and heavy rainfall allow some hardy crops to be grown for local needs. Fertile Annapolis Valley, Nova Scotia has the most famous area for apples in the world. However, fishing is one of the most important economic activities in the Laurentian climate.

The most significant economic activity is the production of lumber and its related industries in the paper, pulp, and wood sectors. The impact of agriculture is diminished by the lengthy and harsh winters.

Dairy farming is practised by farmers across the North American continent. The most well-known apple-growing region in the world is the Annapolis valley in Nova Scotia. But the most notable economic activity is fishing.

Another crucial fishing field in the world is the northwestern Pacific, which is surrounded by the islands of Japan. The majority of the local population relies on fishing to survive.

Large fishing ports with comprehensive refrigeration facilities may be found in Hakodate and Kushiro. The Arctic, Antarctic, and Atlantic oceans are all frequent destinations for Japanese fishing trawlers.

The Arctic and Antarctic are two far-off places where sizable whaling fleets with processing facilities travel [Japan is attacked for its whaling operations]. A sixth of all fish caught worldwide each year is captured in Japan. Seaweeds, fish meal, and fish waste are all used by the Japanese as fertilisers in their crops. One of the few nations that have embraced the production of seaweed is Japan (India is taking baby steps in seaweed cultivation).

Weeds are grown in coastal farms that are submerged in water for sale as food, chemical ingredients, and fertilisers. Pearl culture is another facet of Japanese fishing. Pearl oysters are used to harvest pearls. Because it is difficult to find wild pearls in big quantities, the Japanese have started to gather “cultured pearls.”

Winter temperatures are below freezing, and snowfall is common. Rainfall occurs all year, with a peak in the summer. The annual rainfall ranges from 75 to 150 cm. The landscape is dominated by cool temperate woodland.
The plentiful rains, hot summers, and wet air from fog all promote tree growth. Timber and seafood are the most popular exports. Much of the fir, spruce, and larch coniferous forest is heavily exploited. Lumbering, which includes the timber, paper, and pulp industries, is the most important economic enterprise. Agriculture is less important due to the long and harsh winters.

The continental shelf around Japan’s islands is rich in plankton and serves as a good breeding ground for a variety of fish due to the convergence of the warm Kuroshio and cold Oyashio currents.

Is Laurentian climate present in the southern hemisphere?

As a result, the Laurentian climate is frequently referred to as the Cool Temperate Monsoon Climate in China. It has a wide yearly temperature range and an extremely long, frigid winter. Snow makes up a large portion of the wintertime precipitation in northern China, Korea, and Hokkaido, Japan.

Why is the Laurentian region famous for fishing?

Due to its physical significance, fishing is the most notable economic activity in the Laurentian climate region, particularly in Newfoundland and Japan. Planktons are abundant on the gently sloping continental shelf that surrounds the islands of Newfoundland and Japan, mostly because of the convergence of warm and cold ocean currents.

What is Laurentia today?

The majority of what is today North America and Greenland were formerly part of the ancient continent called Laurentia.

Which climate type is absent in Southern Hemisphere?

Due to the narrowness of the southern continents at high latitudes, the Siberian climate is strikingly missing in the southern hemisphere.

What climate has no seasons?

Year-round temperatures in the tropics range from 25 to 28 degrees Celsius (77 to 82 degrees Fahrenheit). This is a result of increased sun exposure in the tropics. The tropics don't have the same kind of seasons as the rest of Earth because of all the sun.