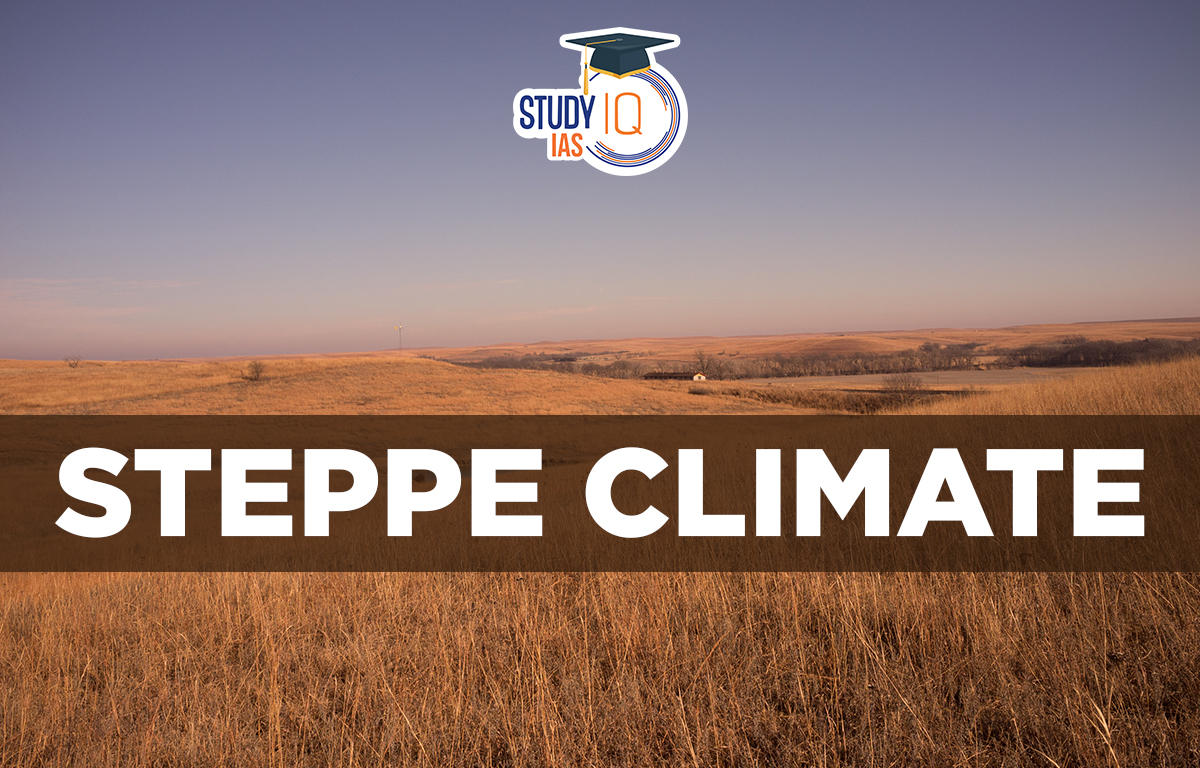 Steppe also known as Flat grasslands can be found in regions with temperate climates. The Steppe Region’s Climate or Cool Continental Region lies halfway between the tropics and the poles. The summertime climate in steppes is warm to hot, and the wintertime climate is icy. Climate types include Steppe Climate, which is covered in the UPSC Geography Syllabus.

Temperate grasslands border the deserts, away from the Mediterranean regions and in the interiors of the continents. They are located in the mid-latitude or temperate zone. Grasslands are practically treeless. In Eurasia, they are called steppes and extend from the Black Sea coast to the Altai Mountains (2,000-mile-long belt) to the east.

The steppe region’s climate lies halfway between the tropics and the poles. Steppes have a warm/hot climate in the summer and a frigid environment in the winter. Due to continentality [deep within the interiors of continents where rain-bearing winds do not reach], grasslands are nearly treeless.

The climate is continental with extreme temperatures. Temperature varies greatly between summer and winter. Summers are hot, and winters are cold. Summer is very hot, with temperatures as high as 18 degrees – 20 degrees C. The climate of a steppe never experiences extremes in the southern hemisphere.

The average rainfall is around 45 cm, but it varies from 25 cm to 75 cm depending on the location. Heavy rain occurs in June and July (late spring and early summer). About 2.5 cm of precipitation falls during winter, with occasional depression and snowfall from the westerly winds. The sea effect causes more rain in the southern hemisphere.

Although it ranges from 25 cm to 75 cm depending on where you are, the average rainfall is about 45 cm.It rains the most in June and July (late spring and early summer). About 2.5 cm of precipitation falls as snow for the majority of the winter months and is brought in by Westerly depressions. Higher rainfall is produced in the southern hemisphere by the maritime effect.

Grass species predominate in grasslands, with various proportions of annual and perennial dwarf species coexisting. Tall-, medium-, and short-grass prairie zones can be found along a longitudinal gradient across North America from east to west because the average height of the grass is related to rainfall. The landscape undergoes a significant transformation from spring, when the grasses are green and the dwarfs are in their flowering stage, to summer, when brown, seeded, and decaying plants predominate. Shrub-steppes are steppes that are dominated by shrubs, especially in arid regions, and differ from deserts primarily by their higher latitudes, lower mean temperatures, and decreased diversity.

Grasslands are ploughed for extensive, mechanized wheat cultivation and are now the “granaries of the world.” In addition to wheat, maize is grown mostly in hot and humid areas.

One of the most significant commerce and travel routes in the past was the Eurasian steppe. The level terrain offers the best connection between Asia and Europe. The Eurasian steppe has been traversed by caravans of horses, donkeys, and camels for thousands of years.

Prior to the turn of the century, cultivation was not known, and the area was among the least populated in the world. Since the grasslands have been heavily mechanically ploughed in recent years for the growth of wheat, they are now referred to as the “granaries of the world.”In warmer and drier places, maize is becoming more common in addition to wheat.

More nutrient-dense Lucerne or alfalfa grass has taken the place of tufted grasses for cattle and sheep. The most significant ranching regions in the world right now are these temperate grasslands.

The large grasslands no longer support this type of grazing by migratory animals. Nomadic tribes like the Kirghiz and Kazakhs were herders. The harsh climate of the nomads, which included protracted droughts and erratic rains, gave rise to the Kirghiz, a fierce and intrepid people who long resisted Russian slavery. They are currently being pressured by the Communist leadership to settle down. The steppes have been converted into vast state farms and communal farms for grazing and wheat production.

The levelness of the Steppes and other temperate grasslands around the world makes ploughing and harvesting relatively simple. Agriculture is entirely mechanised on the Prairies, Argentina’s Pampas, Ukraine’s Steppes, and Australia’s Downs.

Natural settings are ideal for animal grazing. After the development of refrigerated ships in the late nineteenth century, temperate grasslands were important pastoral areas for the transportation of enormous amounts of beef, mutton, wool, and hides. In some sections of the North American grasslands, milk, butter, cheese, and other dairy products are also vital.

One of the most significant trade and transport corridors in the world is the Steppe Climate. The best grounds for growing wheat are there. The steppe climate is one of the important climates since it impacts climatological parameters both individually and collectively. They significantly improve the environment as well.

Where is steppe climate?

The largest flat steppes on earth are found in temperate Eurasia. This area of Eurasia, which is frequently referred to as the Steppe, stretches for around 8,000 km (5,000 miles), from Hungary in the west via Ukraine and Central Asia to Manchuria in the east.

What is the average temperature in steppe climate?

Is a steppe a grassland?

The Steppe, a grassland region that stretches from Hungary in the west via Ukraine and Central Asia to Manchuria in the east, covering a distance of around 5,000 miles (8,000 km).

Does steppe have snow?

Steppe experiences extremely chilly winters and mild summers. In the northern Steppes, there is frequently a lot of snow. There are severe winds and protracted droughts in the Steppes.

Do steppes have rivers?

In the steppe, there are a lot of seasonal tiny rivers that dry up in the summer. The water is transported by the main rivers, like the Boh River and the Dnipro River. The major lakes are of the coastal, liman type, with many having saline water; the little lakes, frequently in pody, are seasonal.