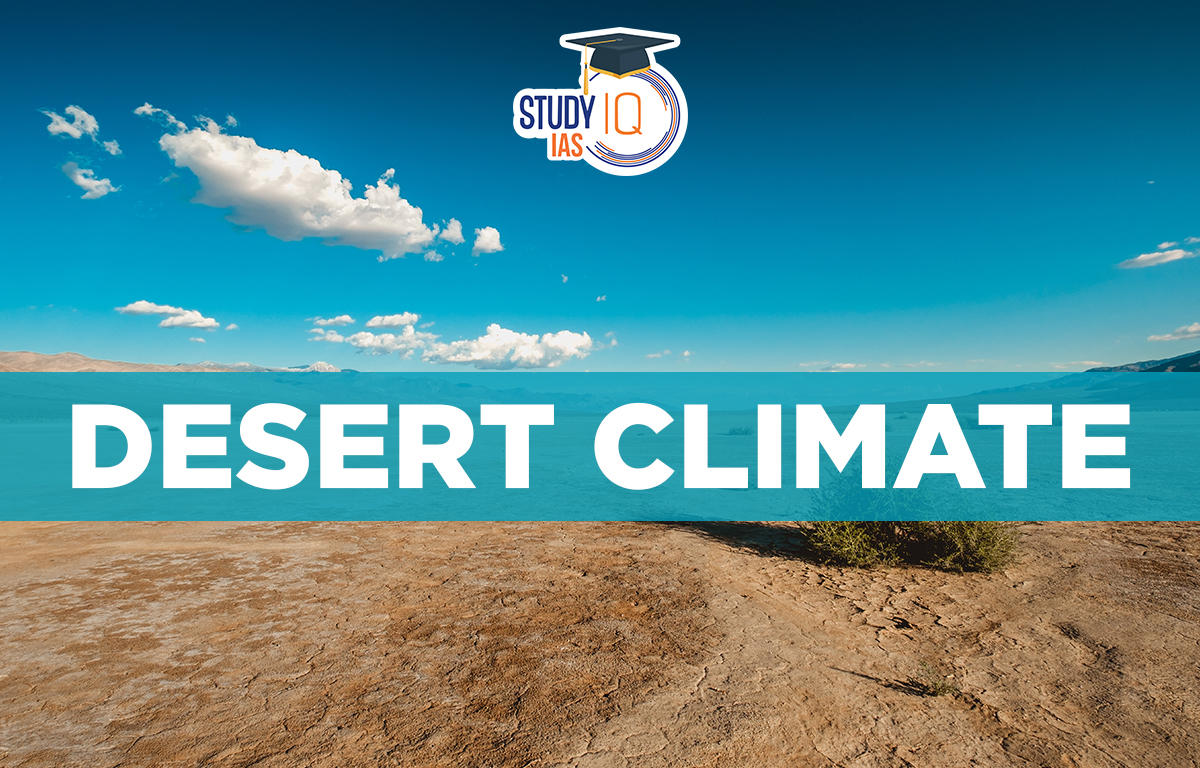 The aridity of the hot deserts is primarily caused by the effects of off-shore Trade Winds, which is why they are also known as Trade Wind Deserts. The world’s major hot deserts are found on the western coasts of continents between latitudes 15° and 30°N. and S. They include the Sahara Desert (3.5 million square miles), the Great Australian Desert, the Arabian Desert, the Iranian Desert, the Thar Desert, the Kalahari Desert, and the Namib Desert.

The desert in North America stretches from Mexico into the United States and is known by various names depending on where you are, such as the Mohave, Sonoran, Californian, and Mexican Deserts.

The Atacama or Peruvian Desert (rain shadow effect and off-shore trade winds) is the driest desert in South America, receiving less than 2 cm of rain per year. The diurnal temperature range in these hot deserts is generally high, ranging from fourteen to twenty-five degrees Celsius on average.

Desert Climate: The majority of hot deserts climate are found between 15-30° north and south of the Equator, near the Tropics of Cancer and Capricorn. The Sahara Desert in Africa is the world’s largest hot desert, stretching across the entire continent. Hot deserts have a harsh climate and a difficult environment.

The world’s major hot deserts are located on the west coasts of continents between 15º and 30º N and S latitudes. These include the largest Sahara Desert (3.5 million square miles), the Great Australian Desert and the Arabian Desert, the Iranian Desert, the Thar Desert, Kalahari, and the Namib Desert. In North America, the desert stretches from Mexico to the United States and is called by different names in different places, e.g., Mohawk, Sonoran, California and Mexican deserts. In South America, the Atacama or Peru desert (rain shadow effect and offshore trade winds) is the driest of all deserts, with less than 2 cm of rainfall per year.

Temperate deserts are rainless due to the continental or rain-shadow effect. Gobi Desert (Continentalism) and Patagonian Desert (Rain Shadow Influence). In the mid-latitudes deserts, many plateaus and found far from the sea. They are the Ladakh, Turkestan, Taklamakan, and Gobi Deserts in Central Asia, the dry basins of the Great Basin in the western United States, and the Patagonian Desert in Argentina.

3. The Climate of a Mid-latitude Desert

Mid-latitude deserts are found in plateau regions that are typically surrounded by high mountains. These inland areas are far from the seas. Their formation is primarily caused by a lack of rain. The rain-carrying winds are unable to reach these areas because they are sheltered by the mountains.

These mid-latitude deserts may experience snowfall during the winter months. This is due to their elevation and coldness. Light rainfall is occasionally caused by climatic depressions.

Winters in this area can be harsh, with strong chilly winds blowing constantly. Rivers and lakes frequently freeze, but when they thaw in the summer, there is a risk of flooding.

The hot desert is also known as the Trade Wind Desert because of its dryness, which is caused by off-shore trade winds. The Sahara Desert, Iranian Desert, Arabian Desert, Namib Desert, Thar Desert, and Great Australian Desert are among the world’s largest hot deserts. These are found between latitudes 15 and 30 degrees north and south, typically on the continents’ western coasts.

The Peruvian or Atacama Desert in South America is a hot desert that is also known as the world’s driest desert. This area receives less than two centimetres of rain per year. There are parts of the Atacama Desert that haven’t seen a drop of rain since the desert was discovered.

Aridity is the most characteristic feature of the desert climate. In some deserts, hot or mid-latitudes, the annual rainfall is more than 10 inches, while in others, it is less than 0.02 inches. The hot deserts lie astride the Horse Latitudes or the Sub-Tropical High-Pressure Belts where the air is descending, a condition least favourable for precipitation of any kind to take place.

Deserts are the hottest places on earth and have the highest temperatures throughout the year. The hot deserts do not have a cold season and the average summer temperature is 30 C. Al Aziziya, 25 miles south of Tripoli in Sahara, Libya, recorded the highest shade temperature ever recorded at 58 C. The daily temperature range in the deserts is very high.

All deserts contain some types of vegetation such as grasses, shrubs, herbs, weeds, roots, or bulbs. The predominant vegetation in hot and mid-latitude deserts is xerophytes or drought-resistant shrubs. These include bulging cacti, thorn bushes, long-rooted thorn grass, and scattered dwarf acacia. Trees are very rare except where groundwater is abundant in support of palm groups.

Despite harsh climatic conditions, the desert has always been inhabited by different people. Desert dwellers can be classified into the following categories – primitive hunters and gatherers (Bushmen and Bindibu), nomadic herdsmen (Tuareg in the Sahara, Gobi Mongols, and Bedouins in Arabia), caravan traders, settled settlers, and mining settlers.

People have lived in these parts of the world despite the desert climate’s extremes. Herdsmen have made deserts their home, whether they are the nomadic Tuaregs of the Sahara Desert, the Gobi Mongols of the Gobi Desert, or the Bedouin Arabs of the Arabian Desert. It is also home to primitive gatherers and hunters such as the Bindibu of Australia and the Kalahari Desert’s Bushmen.

To survive, these desert settlements relied on whatever means were available to them. Cultivators in California rely on the Colorado River in the Imperial Valley, Pakistan’s Indus River, and Iraq’s Tigris-Euphrates River for their agricultural needs. Oases are formed in some desert areas where underground water rises to the surface.

People generally build their homes in the areas surrounding these bodies of water. Some oases are extremely large and serve a diverse population; for example, Morocco’s Tafilalet Oasis has a population of approximately 1.7 million people. Wheat, barley, maize, cotton, sugar cane, and a few varieties of vegetables and fruits are among the crops grown in the desert climate. One of the most important trees is the date palm, and dates are a popular fruit in this region.

A desert climate is defined as having less than 25 cm of rainfall per year. Hot deserts are typically found on the western coasts of their continents, whereas mid-latitude deserts form in plateaus surrounded by mountains. Summers in these areas are extremely hot, and winters are extremely cold. Plants that can grow and survive with very little water make up the natural vegetation. Deserts have evolved over centuries, and desertification is a major concern today due to the abuse that nature endures at the hands of humans.

What is the climate in a desert?

Is the desert climate hot and dry?

Because of the low rainfall and high temperatures in the desert, the climate will be hot and dry.

What are the main features of desert climate?

What are the characteristics of the desert?

Deserts have low humidity (air moisture), low annual rainfall, and an overall moisture deficit, which means that evaporation exceeds rainfall on average. Extreme temperatures are another feature of deserts.

Which is the hot desert in India?

The Thar Desert is located in northwest India. It is one of the major hot deserts of the world with the highest population density.