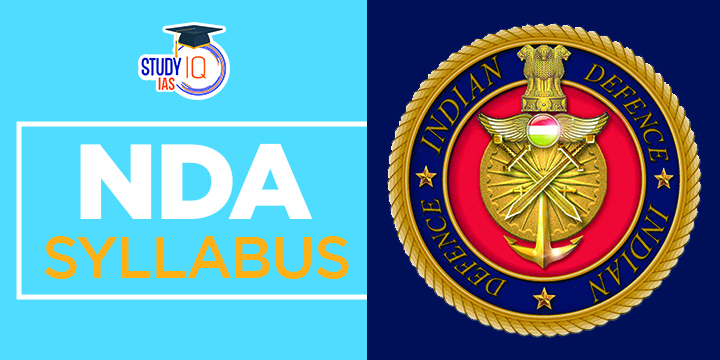 The Indian Armed Forces’ Joint Services academy is called the National Defence Academy (NDA). Every year, the National Defense Academy Exam is held by the Union Public Service Commission (UPSC) twice a year. One of the most demanding exams in India to take an admission in the Defense Forces. Both eligible males and females will be selected for NDA on the basis of the written exam and personality test.

Candidates can better prepare for the exam by developing a vision and action plan with the aid of a thorough understanding of the NDA Syllabus 2023. Only those who succeed in the written exam are eligible for the SSB Interview stage. The applicants will benefit from this article’s thorough explanation of the syllabus and will be one step closer to achieving their objectives. NDA 2023 Syllabus consists mainly of two papers Mathematics and General Ability Test (GAT) for the admission to Indian Defence Forces. For detailed syllabus of NDA 1 2023 and topic wise coverage, refer to the following article.

NDA 2023 Mathematics Syllabus consists of Algebra, Matrices & Determinants, Trigonometry, Analytical Geometry of Two and Three Dimensions, Differential Calculus, Integral Calculus and Differential Equation, Vector Algebra and Statistics and Probability. Mathematics is a Paper 1 having 300 maximum marks. This paper requires consistent practice and determined efforts to improve both the preparation and the results. The candidates must maintain accuracy and speed in order to respond to these questions within the allocated time and provide the required results. Follow the table given below for the NDA 1 2023 exam’s mathematics syllabus to see the full breakdown of all the individual topics.

NDA Syllabus English: English is the Part A of the Paper 2 (General Ability Test (GAT)) in the written exam of NDA 2023. To increase their scores in the English section, candidates should read newspapers on a daily basis. They should also highlight any difficult or new words and find their definitions to improve their vocabulary and also improve to solve the reading comprehension section questions. The objective of this paper is to evaluate the candidates’ command over the English language and their capacity for formal word usage.

The following syllabus is intended to outline the range of these topics covered in this paper. The list of topics is not intended to be comprehensive; you may also be asked questions about subjects that are broadly related but not included in the syllabus specifically. Candidates are required to show knowledge and a thorough understanding of the topic in their answers.

Q. Does the NDA syllabus change every year?

Q. How many hours should I study for NDA?

Ans. There are no fixed hours to study and crack the NDA exam. But still candidates should give 3-4 hours on a daily basis and at least 6 months for the complete preparation of the NDA 2023 exam.

Ans. If you want to crack the NDA exam, you cannot ignore mathematics which carries 300 maximum marks. Each and every topic in the maths syllabus is related to the 10+2 level. The preparation of mathematics can be made easy by just maintaining consistency and regular practice.