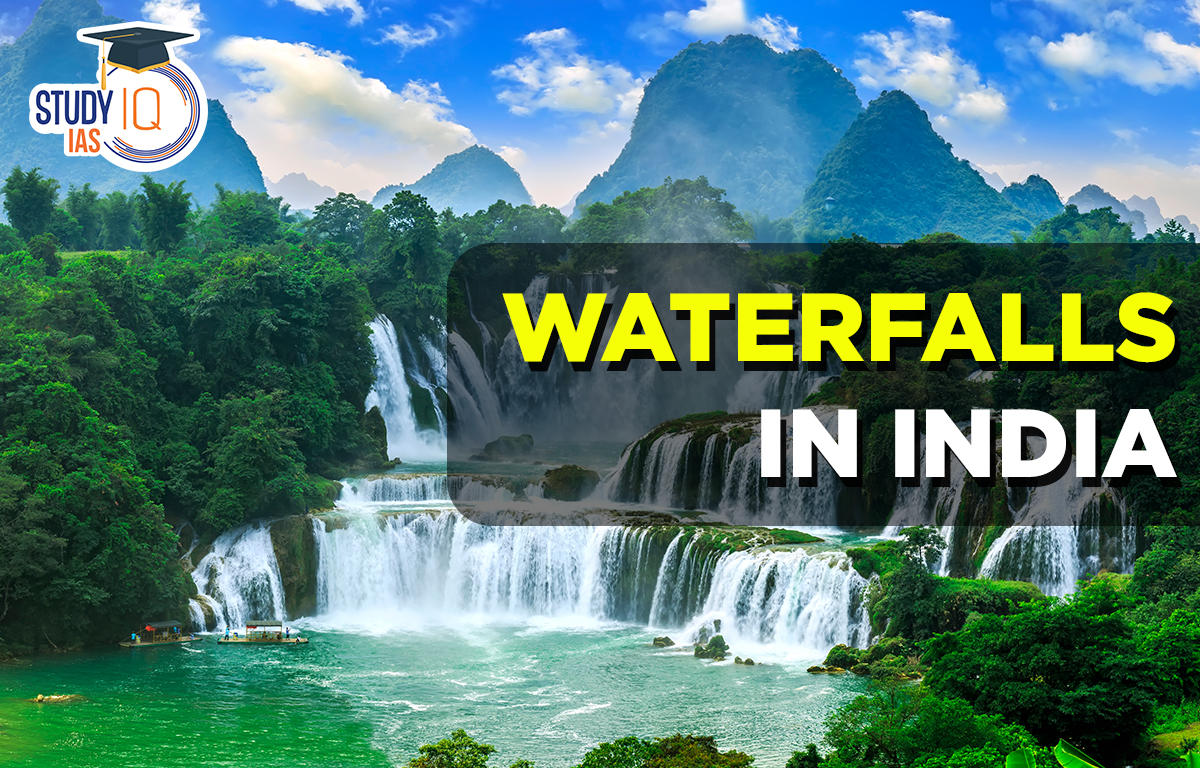 India has a wide variety of waterfalls. Some of the significant waterfalls in India are Jog Falls, Dhuandhar Falls, Chitrakoot Falls, Kutralam Falls, Rajrappa Falls, and Hundru Falls. An area of a stream or river where waterfalls over a vertical drop or a succession of steep drops is called a waterfall. Waterfalls are created when meltwater spills over the edge of a tabular iceberg or ice shelf. Where lakes pour into valleys in high mountains in a river’s upper course, waterfalls frequently emerge.

The renowned Athirapally Waterfalls may be found in Kerala’s Thrissur district along the Chalakudy River. It originates from the high parts of the Western Ghats, close to the entry to the Sholayar hills. With an 80-foot height, it is Kerala’s tallest waterfall and is known as “The Niagara of India.” Beginning in the 1990s and continuing until 2021, there was controversy about a state hydroelectric dam proposal on the Chalakudy River above the waterfalls.

In the Western Ghats of Karnataka, India, close to Sagar Taluk in Shivamogga District, there is a waterfall known as Jog Falls on the Sharavathi River. The second-highest plunge waterfall in India is this one. Depending on the rain and season, it is a segmented waterfall that transforms into a plunge waterfall.

The world-famous Marble Rocks are where the Narmada River narrows before it plunges into the Dhuandhar waterfall. It is situated in Madhya Pradesh’s Jabalpur. One can hear the noise of the plunge, which produces a bouncing ball of mist, from a great distance away. Rocks made of white marble appear silvery when illuminated by moonlight.

In the Hazaribagh District of Jharkhand, Bhairve (Bhera), which descends from a height of 30 feet, joins the river Damodar. A well-known temple in the neighbourhood is Chinnamasta Temple. There are some spectacular rock formations in this area.

A waterfall in Jharkhand, India is called Hundru Falls. It may be found in the Ranchi district. It is the 34th-highest waterfall in India. It is among the most popular tourist attractions in the region. The varied rock formations that have emerged as a result of erosion brought on by the steady flow of water have enhanced the area’s beauty.

Hogenakkal Falls is a waterfall in South India that is situated on the Kaveri River close to the border of the districts of Chamrajnagar in Karnataka and Dharmapuri in Tamil Nadu. It is 152 kilometres from the Kolar Gold Fields and 127 kilometres from Bangalore. It is a well-liked tourist site with bathing facilities and leased boat rides, and it is sometimes called India’s Niagara Falls.

The waterfall known as Kempty Falls is situated in Ram Gaon and is south of Kempty in the Tehri Garhwal District of Uttarakhand, India. It is 13 kilometres from Mussoorie and 45 kilometres from Dehradun on the Chakrata Road. It is roughly 1364 metres above sea level and is located at 78° 02′ East longitude and 30° -29′ North latitude.

In Chhattisgarh, close to Jagdalpur, are the Chitrakoot Falls. They stand 29 metres tall and are situated beside the Indravati River. During the monsoon season, Chitrakoot Falls appear majestic. It is also known as the Indian Niagara.

In Chhattisgarh, it is the highest waterfall. Teerathgarh Falls on the Kanger River is a waterfall in the block style. The water descends 91 metres(299 feet) in one drop.

Bihar is where Rakim Kund Falls are located. Gayghat River, an Ausane River tributary, is the source of this waterfall. It stands 168 m high.

On the Ghataprabha River in the Belagavi district of Karnataka, there is a waterfall known as the Gokak Falls. The waterfall is about six and a half kilometers from Gokak town. A 52-meter leap over a sandstone cliff in a picturesque gorge of the rugged valley is made by the Ghataprabha River after a long, winding course that resembles Niagara Falls on a smaller scale. The waterfall’s horseshoe-shaped crest has a 177-meter flood width.

In Tamil Nadu’s Tenkasi district, which borders Kerala’s Kollam district, there is a waterfall known as Courtallam Falls (also spelled Kutralam/Kuttalam Falls). Due to the therapeutic scent of the waters, the falls, which are on the river Chittar in the Western Ghats, are referred to as a “medical spa.”

The Keoti Falls, also known as Kevti, are situated in Madhya Pradesh, India’s Rewa district. It is the 24th-highest waterfall in India. A tributary of the Tamsa or Tons River, the Mahana River originates on the Rewa Plateau. It has an elevation of 98 metres (322 ft). The World Waterfall Database estimates the waterfall’s height to be 130 metres (430 ft). It’s a divided waterfall with a single drop.

A waterfall in the Ranchi district of Jharkhand, India, is called the Jonha Falls (sometimes referred to as the Gautamdhara Falls). A hanging valley waterfall is the Jonha Falls, which are situated on the edge of the Ranchi plateau. By dangling over the Raru River, the Ganga River creates the falls. 43 metres is the height from which the water falls (141 ft). A case in point for rejuvenation is the Jonha Falls.

On the River Bihad, close to Rewa, Madhya Pradesh, are the Chachai Falls, which are almost 130 metres high. One of India’s tallest single-drop waterfalls, these falls are the second highest in Madhya Pradesh. It serves as an illustration of a nick point that has vanished as a result of renewal.

It is a waterfall on the Machkund River in the state of Orissa that is 157 metres high. A sizable hydroelectric project is supported by Dudma Falls. It is a significant place of worship. Another name for these falls is Matsya Tirt.

On the Mandovi River in the Indian state of Goa, there are four levels to the Dudhsagar Falls, also known as the Sea of Milk. Dudhsagar Falls is one of India’s tallest waterfalls, reaching a height of 310 metres (1017 feet) with an average width of 30 metres (100 feet). The falls are located in Mollem National Park and Bhagwan Mahaveer Sanctuary in the Western Ghats.

On the Urmodi River, there is a waterfall called the Bhambavli Vajrai Waterfall. It is located in Maharashtra, next to the Sahyadri hill and Bhambavli village, around 27 kilometres from Satara (city). The waterfall’s three tiers add up to a total height of 560 metres, making it India’s second-highest plunge waterfall after the 335-meter(1100 ft) Nohkalikai Falls in Meghalaya.

India’s tallest waterfall, Kunchikal Falls, is created by the Varahi river, and is situated in the Shimoga region of Karnataka’s Nidagodu village, close to Masthikatte.

Q) Which is largest waterfall in India?

Ans. With a height of 1493 feet, Kunchikal Falls in Shimoga District, Karnataka, is the tallest waterfall in the country.

Q) Where is the famous waterfall in India?

Ans. The second-largest waterfall in Asia is located in Shimoga District of Karnataka, and it is called Kunchikal Falls. Every year, rainfall at this location inside the Agumbe rainforest adds to the allure of the waterfall, which tumbles from a height of 455 meters.

Q) Which is most beautiful water fall in India?

Ans. The Nohkalikai Falls, which are the tallest and most stunning waterfall in India at 335 meters, are situated in Cherrapunji, one of the wettest regions on earth.

Q) Which is the 2 largest waterfall in India?

Ans. The second-largest water fall in India is Shivasamudram ( 16th in the world). Its average width is 850 metres, and its average height is 90 metres.

Q) Which is the deepest Falls in India?

Ans. The Kunchikal Falls are situated in the Agumbe Valley of Karnataka’s Shimoga district. They are India’s tallest waterfall, falling from a height of 1493 feet.

Which is largest waterfall in India?

With a height of 1493 feet, Kunchikal Falls in Shimoga District, Karnataka, is the tallest waterfall in the country.

Where is the famous waterfall in India?

The second-largest waterfall in Asia is located in Shimoga District of Karnataka, and it is called Kunchikal Falls. Every year, rainfall at this location inside the Agumbe rainforest adds to the allure of the waterfall, which tumbles from a height of 455 meters.

Which is most beautiful water fall in India?

The Nohkalikai Falls, which are the tallest and most stunning waterfall in India at 335 meters, are situated in Cherrapunji, one of the wettest regions on earth.

Which is the 2 largest waterfall in India?

The second-largest water fall in India is Shivasamudram ( 16th in the world). Its average width is 850 metres, and its average height is 90 metres.

Which is the deepest Falls in India?

The Kunchikal Falls are situated in the Agumbe Valley of Karnataka's Shimoga district. They are India's tallest waterfall, falling from a height of 1493 feet.