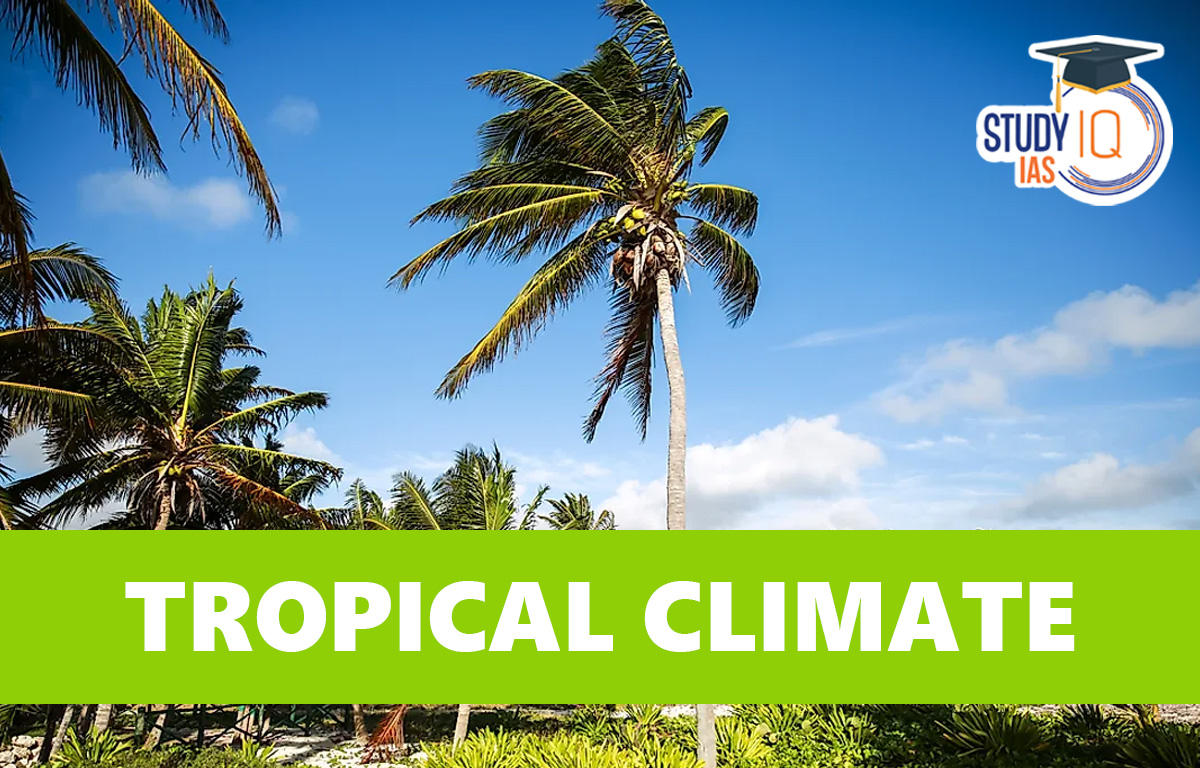 A Tropical Monsoon Climate type of climate is experienced along the east coast of the tropics, with continuous rainfall from trade winds at all times. Rainfall is orographic, as in eastern Brazil, and convective due to intense heat during the day and summer. It tends towards summer as much as monsoon land but without the usual dry seasons.

It is found between latitudes 5 ° and 30 on either side of the equator. Tropical monsoon lands are covered by wet monsoons along the coast in summer and offshore dry conditions in winter. They grow best in: the Indian subcontinent, Burma, Thailand, Laos, Cambodia, parts of Vietnam, southern China, and northern Australia.

Despite the fact that the average annual temperature is fairly high, the summer and winter seasons are clearly distinguished due to the sun’s northward and southward movement. In the Köppen system, a tropical climate is defined as having an average temperature of more than 18°C each month. There is no winter season, and annual rainfall far outnumbers annual evaporation.

The natural vegetation of tropical monsoon lands is dependent on summer rainfall. Trees usually have deciduous leaves due to the dry period. Where there is high rainfall, e.g., The resulting vegetation is a jungle in southern Burma, peninsular India, northern Australia, and coastal areas with tropical marine climates.

The forest is much more open and less luxurious than the Equatorial Forest and has fewer species. Most forests give valuable timber and are valuable for their durable hardwoods. Of these, teak is the most famous. Trees are typically deciduous in nature. The majority of the forests produce valuable timber, such as teak. Other types of wood include sal, acacia, and eucalyptus.

The difference in the rate of warming and cooling of the land and sea is the root cause of the monsoon climate. In summer, when the sun is in the tropic of Cancer, large areas of the Northern Hemisphere are hot. Very slowly warming oceans are relatively cold. At the same time, winter is experienced in the Southern Hemisphere and forms a high-pressure area in the continental interior of Australia.

Winds are drawn towards the continental lowland region that reaches Java as southeast monsoons and then reaches the Indian subcontinent as southwest monsoons after crossing the equator. In winter, the situation is reversed. As the Sun is above the tropic of Capricorn, Continental Asia is much colder, resulting in land cooling faster. The high-pressure area formed by outgoing winds thus results in Northeast monsoons.

This type of climate is experienced along the east coast of the tropics, with continuous rainfall from trade winds at all times. Rainfall is orographic, as in eastern Brazil, and convective due to intense heat during the day and summer. It tends towards summer as much as monsoon land but without the usual dry seasons.

People are primarily engaged in agriculture. Rice, wheat, pulses, cotton, jute, sugarcane, oilseeds, coffee, tea, and various fruits and vegetables are grown here. This region raises all types of domestic animals. Agriculture and other agro-based activities are well-developed in this region.

The region is also very rich in mineral deposits of various types, which are necessary ingredients for modern industrial activities. The main economic activity of the people is agriculture. The major agricultural crops are paddy, sugarcane, hemp, etc.

During the wet season, regions with this Tropical Monsoon Climate experience heavy rainfall and frequent thunderstorms. During the dry season, rainfall is also higher than the average rainfall in tropical climates. The distinction between wet and dry seasons is less obvious.

Temperature: Throughout the year, tropical climates have temperatures around 18 °C. There is little temperature variation between seasons. The Torrid Zone was named by the Ancient Greeks to describe the hot, dry weather that this region experiences.

Where are tropical climates?

The tropical climate zone is located directly around the equator. This zone is primarily found between the Tropics of Cancer and Capricorn. It stretches as far north and south as 30 degrees latitude in some places. Tropical climates are very warm and receive a lot of sunlight.

What is a tropical climate example?

For example, the entire island of Cuba has a tropical climate. Tropical rainforests include two of the world's most famous forests: the Amazon Rainforest in South America and the Congo Basin Rainforest in Africa.

Is Mumbai a tropical city?

Mumbai has a tropical climate that is both wet and dry. The climate in Mumbai is best described as moderately hot with high humidity. Because of its coastal location and tropical climate, temperatures do not vary much throughout the year.

Is tropical warm or hot?

The tropical climate is the first of the five major climate groups identified with the letter A in the Köppen climate classification. Tropical climates have monthly average temperatures of 18°C (64.4°F) or higher in the coolest month, and hot temperatures all year.

What weather is tropical?

The climate in the tropics is primarily hot and humid. This is primarily because the Earth absorbs more solar radiation than it re-radiates back into space. This excessive heating produces weather that can affect any location on the planet.