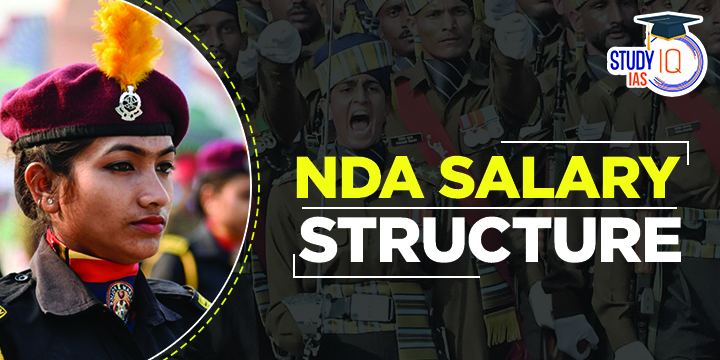 NDA Salary, benefits, and allowances are among the things that attract thousands of candidates each year. The NDA examination is administered twice yearly by the Union Public Service Commission to choose qualified male and female applicants for the Indian Army, Navy, Airforce, and Naval Academy. Candidates should be aware of the details on the NDA Salary per month as per the 7th Pay Commission, job profile, increments, allowances, and other benefits before taking the exam.

Stipends, Grade Pay, Allowances, Promotion Avenues, and Retirement Benefits at National Defense Academy will be covered in this post (NDA). For your rapid understanding, all information regarding the NDA compensation structure and position has been compiled and provided below.

The National Defense Academy, an inter-service institution, provides preliminary academic and physical training to candidates for a period of three years once they have been selected after passing the NDA exam. All three cadet wings—Air Force, Army, and Navy—share the same training throughout the first two and a half years. Following their training, the cadets will receive the following degrees from Jawaharlal Nehru University Delhi:

Fixed Stipend for Cadet Training: Rs. 56,100/-p.m.* stipend given to male and female Cadets throughout the duration of their training in Service academies, i.e., during their time in IMA.

Flying Allowance: The flying allowance for Army Aviators (Pilots) working for the Army Aviation Corps is Rs 25,000 per month.

Candidates who are selected for Siachen postings receive a Siachen Allowance of Rs 42,500 per month. The following allowances will be given to officers stationed to high-altitude areas like Siachen:-

Only the two eldest children who survive receive the monthly allowance of Rs. 2250 each. CEA is permitted from Nursery to 12th Class.

Cadets receive a hotel subsidy of Rs. 6,750 per month for each of their two eldest children who survive. Up to the 12th grade, students are eligible for the hostel subsidy.

NDA Salary 2022: In Case of Disablement

In order to understand about the NDA promotions offered to officers in the Air Force, Army, and Navy depending on their performance and years of service, aspirants who want to serve the country can check through the list.

Q. What is the salary after NDA?

Q. Do NDA students get paid?

Ans. Yes, NDA students get a stipend every month during the training period.

Q. What is the salary of IAS and NDA?