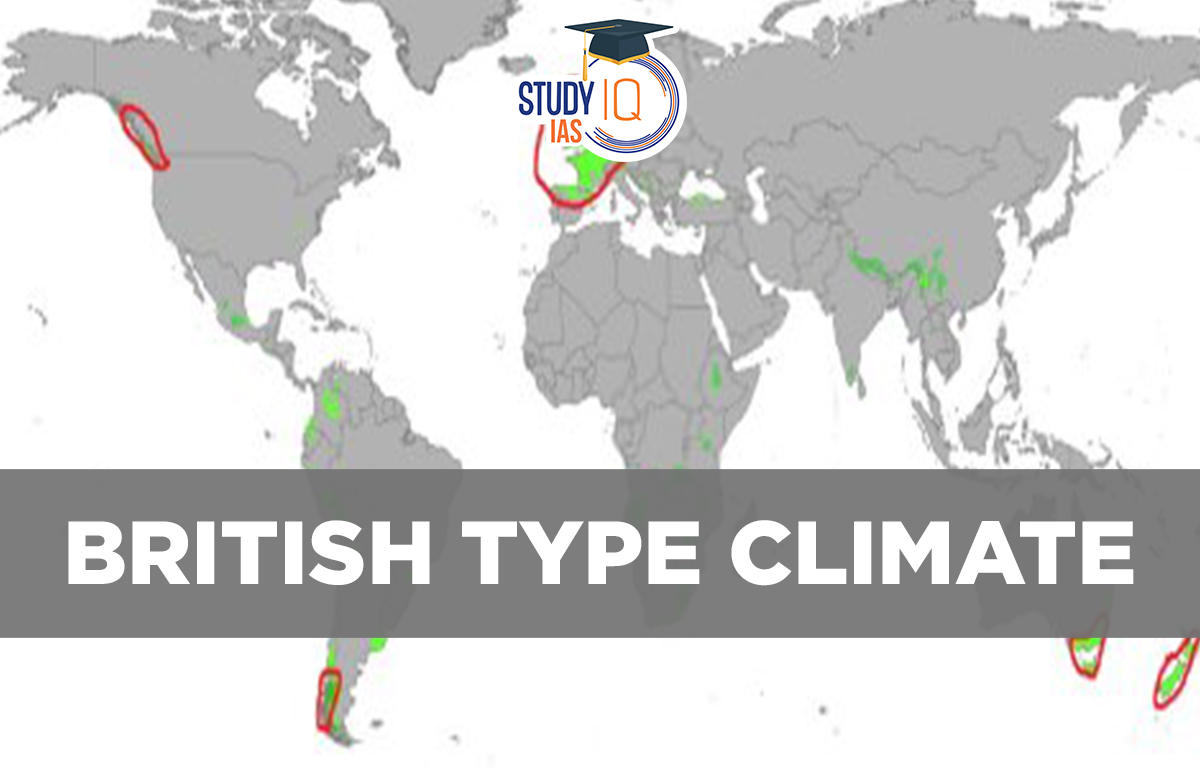 The climate of the United Kingdom is referred to as British Climate, Cool Temperate Western Margin Climate, or North-West European Maritime Climate. All year long, the Westerlies have an impact on the chilly, temperate western edges. They are Temperate Cyclones frontal cyclonic activity zones. The climate of Britain is considered to be mild. We shall talk about the British Type of Climate in this article, which is included in the UPSC IAS Exam’s Geography curriculum.

The temperate western margins are permanently influenced by westerly winds throughout the year. They are areas with high cyclonic activity typical of Britain and are therefore said to experience a British-like climate. From Britain, the climate belt extends to much of the lowlands of northwestern Europe, including northern and western France, Belgium, the Netherlands, Denmark, west Norway, and northwest Siberia. Most parts of southern Chile, Tasmania, and New Zealand enjoy a particularly southern island climate in the Southern Hemisphere.

The cold temperate western edges or British Type of Climate are constantly influenced by the westerlies throughout the year. They also have a lot of cyclonic activity, which is typical of British regions, hence it can be claimed that their climate is British in nature. Rainfall occurs frequently all year long. Both chilly and rainy winters and hot and rainy summers are common there.

Additionally, the weather is very variable. This climate is also known as the North-West European Maritime Climate or the Cool Temperate Western Margin Climate.

The yearly average ranges from 5 to 15 degrees Celsius. Here, the winters are remarkably mild. This is true because of the North Atlantic Drift’s warming effect. Sometimes, extreme cold spells are caused by the invasion of cold arctic continental air (Polar Vortex) from the interiors.

The British climate has enough rainfall all year round, with a little inclination toward a winter maximum (due to frontal cyclones). The western edges receive the most rainfall from westerlies. The degree of alleviation can have a big impact on the annual sum. This is particularly true in New Zealand, where the rain-shadow effect causes the eastern Canterbury plains to get much less rainfall than the western orographic margins.

Like most temperate regions, there are four separate seasons. The winter season is marked by overcast skies, misty mornings, and numerous days with rain due to passing depressions. Spring is the driest and most invigorating season when people emerge from the gloomy winter to see everything turn green again. After the summer, there comes a protracted, sunny time. The cycle then restarts in the midst of autumn’s screaming winds. This type of climate, with its four different seasons, is noticeably missing from the tropics.

Deciduous woodland is the typical vegetation for this climatic type. The trees lose their leaves in the winter. They have adapted in this way to stave off the winter’s bitter cold and snow. The time when the shedding starts are in the autumn, or “fall” season. Some of the most common tree species include oak, elm, ash, birch, beech, and poplar. Willows thrive in wet environments (willows are used to make lightweight cricket bats). The Indian state of Kashmir has willows. Further up in the mountains, in places like the Scandinavian highlands, the Rockies, the southern Andes, and New Zealand’s Southern Alps, deciduous trees are frequently replaced by conifers. Conifers can withstand higher heights, colder climates, and less favourable soil conditions.

Contrary to equatorial forests, deciduous trees grow in pure stands and have a higher logging value. The openness and lack of undergrowth of the woodlands are advantageous to logging operations. A substantial sum of money can be saved in the log transfer because of how easily the logs can be penetrated. Deciduous hardwoods are excellent for industrial uses and for use as fuel.

In Tasmania, temperate eucalyptus trees are also heavily felled for the logging industry. Higher up in the mountains, conifers (softwood) are cut down and transported to the paper and pulp businesses. They are frequently used in the manufacture of cardboard.

The areas are heavily industrialised and enjoy a high standard of living. Despite being heavily represented in some countries, agriculture, fishing, and logging are not as significant to them as machinery, chemicals, textiles, and other manufactured items. Fishing is a major industry in British Columbia, Norway, and the United Kingdom.

Germany, France, and the United Kingdom are all highly industrialised countries with an abundance of mineral resources. Important manufacturing hubs include the Ruhr region of Germany, Yorkshire, Manchester, and Liverpool in the United Kingdom. The most significant sector is the car industry.

In New Zealand, the Netherlands, and Denmark, dairy-related sectors are thriving. In Tasmania, merino wool production is essential. The wool produced here is sent, among other locations, to textile mills in England, Japan, and China.

It is grown in a wide range of grains, fruits, and root crops, mostly for home consumption rather than for export. With some of the densest populations in the world, North-West Europe has nothing extra to export. In fact, it imports more food than it exports, especially wheat.

The western margin’s warm climate makes it almost perfect for intensive dairying. Cheese is a speciality item from the Netherlands. Denmark and New Zealand are two countries that produce premium butter. Since it is less perishable than fresh milk, cream manufactured from milk is exported all over the world. A variety of condensed or evaporated milk products are made from fresh milk and shipped all over the world for use in baby formula, candies, ice cream, and chocolate.

Northwestern European nations are all highly industrialised and have dense populations. Fruits, eggs, milk, meat, and fresh vegetables are frequently in great demand. The crops are perishable, hence a strong transportation system is necessary. The produce is transported by fast vehicles (truck farming, which is commonly used in the United States) Daily, fast boats from Tasmania cross the Bass Strait to supply fruits, vegetables, apples, and beans to the majority of the nation’s major cities. It’s not surprising that the Australians dubbed Tasmania the “garden state.”

As the sector expands, more fertile lands are being eaten by factories, and wheat is currently a net import into Europe. Farmers in northwest Europe use both pastoral (pastoral) and arable (crop cultivation on the ploughed ground) farming (keeping animals on grass meadows). The most common cereal, grown almost exclusively for domestic use, is wheat. The mixed farm’s second most significant crop is barley. Breweries purchase higher-quality barley to use in making beer or whisky, respectively.

The most important animals reared on a mixed farm are cattle. The North Sea nations (Britain, Denmark, and the Netherlands) are among the most advanced dairy producers in the world thanks to their rigorous and scientific cattle-rearing practices.

Wool and meat are both produced from sheep. The UK is home to some of the most well-known sheep breeds. The increasing pressure on land brought on by increased urbanisation, industry, and agriculture is forcing sheep rearing into less favourable locations.

Beets are crushed to make sugar, and their green tips are fed to animals. The crop thrives in continental Europe’s warmer, drier east as well as in the United Kingdom. The largest sugar production is attained in the dry and sunny fall.

One of the most significant food crops for the home economy of cool temperate areas is the potato.

More starch is produced by potatoes than by any other crop, and they may be cultivated in a range of climatic and soil conditions. The majority of the world’s annual potato crop is now produced in Europe, with Poland, Germany, France, and the United Kingdom being the top four producers.

Deciduous forests are the natural vegetation of this type of climate. In cold weather, the trees shed their leaves. It is an adaptation to protect itself from winter frosts and snow. The common species include oak, elm, ash, birch, beech, poplar, and horn-beam. Unlike equatorial forests, deciduous trees have high timber value from a commercial point of view. Deciduous hardwoods are excellent for fuel and industrial purposes.

The region stands out from others in its extraordinary industrial growth. Production of machinery, chemicals, textiles, and other manufactured goods is predominant. s. Fishing is important in Britain, Norway, and British Columbia.

They offer enough rain throughout the year. They deliver chilly, wet winters and warm, rainy summers to Britain. The British climate provides enough annual rainfall, with a moderate winter maximum (due to frontal cyclones). The western borders experience the heaviest rainfall due to westerly winds. Relief might have a considerable impact on the annual payment total.

Why is Britain a temperate climate?

Due to its mild climate, Britain does not experience extremes in either rainfall or temperature. Winters are kept relatively mild by the Gulf Stream, a significant Atlantic Ocean current that carries warm water from the Gulf of Mexico, while summers are warm but not oppressively so.

What type of climate do the UK and much of Europe experience?

According to the Köppen climatic classification system, the United Kingdom's climate is classified as a humid temperate oceanic climate, or Cfb, which it shares with most of north-western Europe.

Why is Britain so cold?

The UK has been exposed to Arctic cold air. A high-pressure weather system over Greenland and Iceland is heading eastward toward another high-pressure system over Russia, which is the cause of this. As a result, the UK is covered by a cold air mass that has been forced southward.

Is the UK mostly hot or cold?

While the winters are milder, our summers are cooler than those on the mainland. The term "temperate maritime" refers to England's overall climate. This indicates that the climate is mild, with winter lows of around 0°C and summer highs of around 32°C.

The coldest season in the UK is winter (December, January, and February), which features subfreezing temperatures, ice conditions, and occasionally snow.