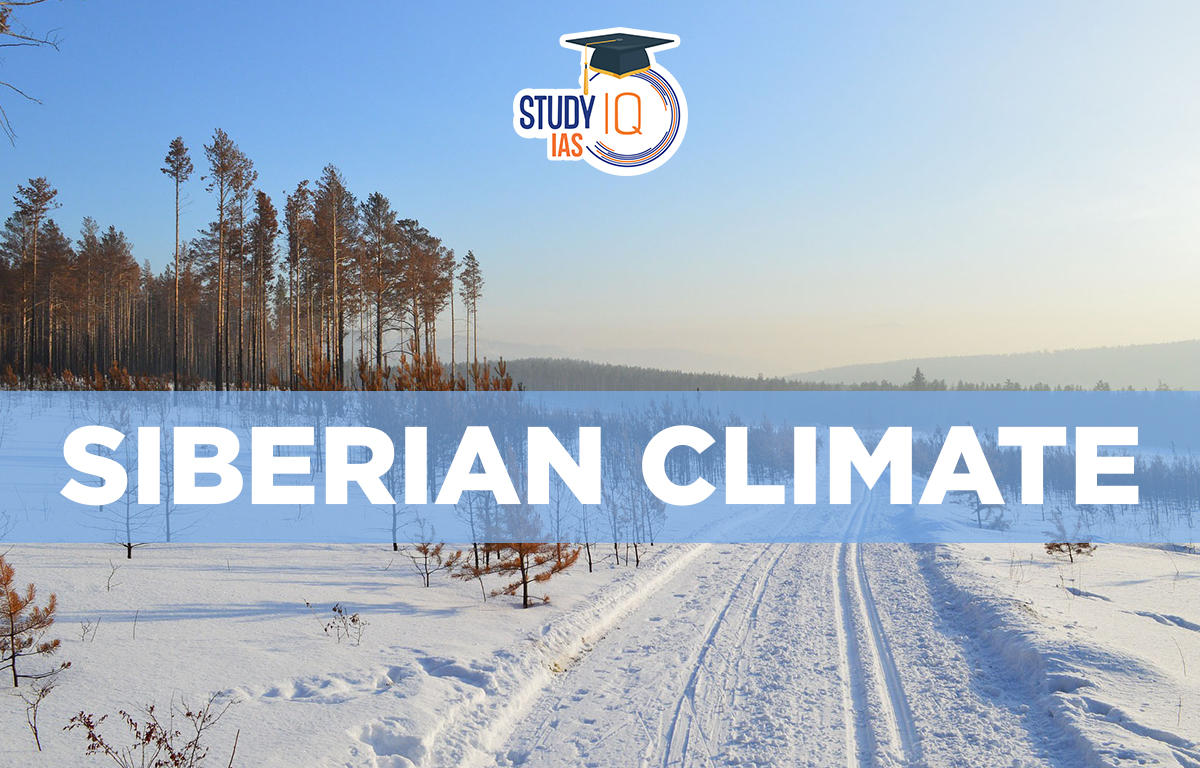 The Siberian climate zone is located 60 degrees north of the equator, it is characterised by lengthy, frigid winters and brief summers. The Siberian environment rarely sees the spring and fall seasons. A severe, chilly environment with limited precipitation (snow and rain) and a brief growth season are characteristics of the taiga type of climate. Winters can last up to six months and be particularly harsh, with average temperatures considerably below freezing. There are only 50 to 100 days without frost throughout the short summers.

You will learn about the Siberian Climate or Taiga Type of Climate in this article, which will help you with your geography study for the UPSC Civil Service Exam.

Siberian Type  Climate is only found in the northern hemisphere due to its extensive east-west range. The Southern Hemisphere doesn’t have it. Knowledgeable about regions just south of the Arctic Circle. On its poleward side, it combines with the Arctic tundra. The weather transforms into a steppe with a temperate climate.

It extends continuously across central Canada, parts of Scandinavian Europe, and most of central and southern Russia. [From 50 to 70 North degrees]. Their lack in the Southern Hemisphere is primarily due to the southern continents’ narrowness at high latitudes. Coniferous forests are only found in the rocky uplands of southern Chile, New Zealand, Tasmania, and southeast Australia.

The temperate continental (Siberian) climate is experienced only in the northern hemisphere with the extensive east-west expansion of the continents at high latitudes. It merges around the Arctic Circle on its polar side into the Arctic Tundra of Canada and Eurasia. 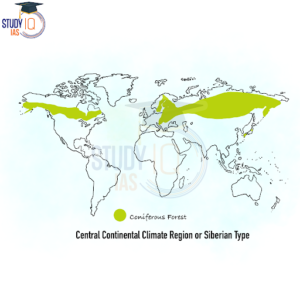 The Siberian climate in the southern hemisphere is not pronounced due to the narrowing of the southern continents at high latitudes. Strong sea effects reduce the intensity of winters, and coniferous forests are found only in the mountainous regions of southern Chile, New Zealand, Tasmania, and southeastern Australia.

Verkhoyansk, located at 68°N 113°E, has experienced some of the coldest weather on earth, with lows as low as -67°C. The extremes are milder in North America because of the continent’s condensed east-west axis. Permafrosts, which are permafrosts [a deep subsurface layer of soil that remains below freezing point throughout the year], are frequently absent because snow is a poor conductor of heat and protects the earth from the intense cold above.

There is no indication of a maritime impact within. Frontal disruptions are possible in the winter.

38 cm to 63 cm of precipitation falls on average each year. The distribution of summer maxima—convectional rain in the middle of summer—between 15 °C and 24 °C is quite uniform. In the winter, precipitation only occurs as snow since the mean temperature remains continuously below zero.

Landscape features are dominated by evergreen coniferous forests. Conifers flourish in this sub-Arctic environment because they need little rain. Small patches of untouched coniferous forest can be found in Germany, Poland, Switzerland, Austria, and other European nations. In North America, the belt extends from Alaska to Canada and into Labrador.

The coniferous forest belts of North America and Eurasia are the richest sources of softwood.

Buildings, furniture, matches, paper and pulp, rayon, and other chemical industries all require softwood in their production. The world’s main producers of softwood are Russia, the United States of America, Canada, and the Fennoscandian nations (Finland, Norway and Sweden).

Contrary to equatorial rain forests, coniferous woods are more consistent and have a moderate density.

Tall, erect trees are produced in coniferous woodlands. Nearly all conifers are evergreen. Unlike deciduous trees, conifers do not regenerate their leaves every year. The lifespan of a single leaf on a tree can reach five years. The bark is thick to protect the trunk from the harsh cold, and the trunks store food. The shape of conifers is conical. Because of its conical shape and slanting branches, snow does not collect.

Additionally, the grip of the winds is weak. Perspiration in hot weather can happen pretty quickly. Leaves have a needle-like shape, are small, thick, and leathery, and prevent excessive transpiration.

Forests are cleared in areas that are more accessible for logging. The coniferous forest belts in Eurasia and North America are the richest sources of softwood used in construction, furniture, matches, paper, pulp, rayon, etc. The largest softwood producers in the world are Russia, the USA, Canada, and Scandinavian countries (Finland, Norway, and Sweden).

In the newsprint sector, Canada surpasses all other producers, accounting for almost half of the world’s total annual production. There is less agriculture because few crops can survive in the sub-Arctic climate of these northern lands. Many Samoyeds and Yakuts and some Canadians from Siberia are engaged in hunting, trapping and fishing.

Many coniferous kinds of wood in the northern hemisphere are still undeveloped because of their isolation. Coniferous woods are underutilised in Canada, Russia, and other nations, with significant untapped potential. More easily accessible forests are cut down for logging on a large scale. Agriculture is unlikely in the sub-Arctic since few crops can endure there.

The far north of Eurasia and Canada is home to a large number of fur-bearing species. In regions with extreme cold, the quality and thickness of the fur increase. The harshest winters are when the best furs are made. Trappers and hunters in Canada use automatic rifles and dwell in log homes in the middle of coniferous forests to locate these animals. The ermine, mink, silver fox, and muskrat are examples of animals that have fur. To ensure a more reliable supply of furs, numerous fur farms have been created in Canada and Siberia.

This is the Siberian climate type’s primary occupation. There is a tonne of coniferous woods that support the logging industry.

In the past, contract workers referred to as “lumberjacks” would move temporarily to forested areas to cut down trees. Trees are now cut down using machines.

Using rivers for transportation Rivers may easily float the softwood logs. As a result, logs are transported by rivers to sawmills further downriver. In sawmills, logs are transformed into lumber, plywood, and other building materials.

4. Industry of Paper and Pulp

Timber is pulped chemically and mechanically to produce wood pulp. Paper and newspaper are produced from wood pulp.

The Taiga is both a breathtakingly gorgeous setting and a crucial ecosystem for the stability and health of the earth. It has adequate moisture to encourage substantial vegetation growth. Above all, it helps to reduce weather extremes and the damage they cause, preserve biodiversity, purify air and water, and maintain a stable climate.

On the other side, the taiga has environmental problems such as excessive clear-cutting of forested regions. Humans work to reconcile the need for resource conservation with the desire to use resources efficiently.

Why is the Siberian climate absent in the southern hemisphere?

The Siberian climate is conspicuously absent in the southern hemisphere because of the narrowness of the southern continents in the high latitudes.

Is the Siberian high wet or dry?

The Siberian High (also Siberian Anticyclone) is a massive collection of cold dry air that accumulates in the northeastern part of Eurasia from September until April.

What are the characteristics of Siberia?

As you move east, the environment gets harsher and there is less precipitation. Taiga, a swampy forest that covers much of Siberia, tundra in the north, forest-steppe and steppe in the southwest of Siberia, and intermontane basins in the south, are the major vegetation zones that run east-west throughout the whole region.

Why does Siberia have the highest annual temperature range?

Siberia, which is the coldest place in the Northern Hemisphere in the winter yet still gets pretty warm in the summer, has one of the widest yearly temperature variations in the world. This results from the concept of continentality or separation from a significant body of water.

Is Siberia the coldest place on earth?