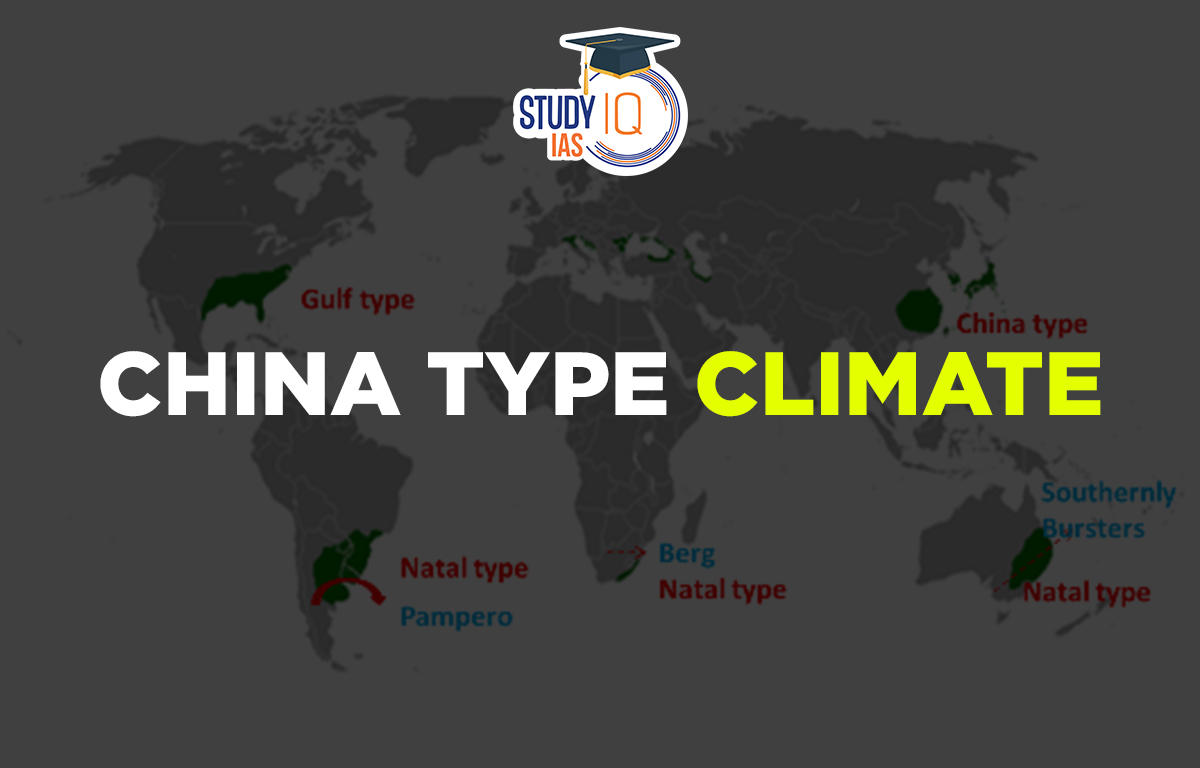 On the eastern margins of continents, in the warm temperate latitudes just beyond the tropics, the China type of climate can be found. It is one of the Warm Temperate Eastern Margin variations and experiences extremely hot summers and extremely frigid winters. China-type climate predominates throughout the majority of China. Southern Japan has a climate characterised by dry seasons and wet monsoons, which cause significant temperature changes between winter and summer. One of the most important geography subjects’ topics is this. Thus, a thorough comprehension of this subject is essential.

Most parts of China have temperate monsoons or China-type climates. The climate is also found in the southern regions of Japan.

It is found in New South Wales (Australia), Natal (South Africa), and Parana-Paraguay-Uruguay Basin (South America). The Natal type differs from the temperate monsoons or the China type in that it receives rainfall from coastal winds throughout the year.

Found between latitudes 20 ° and 35 ° N and S (warmer temperate latitudes outside the tropics). It is found on the east coast in both hemispheres. China’s climate is characterised by dry seasons and wet monsoons, which cause significant temperature changes between winter and summer. The northern and central regions of China as well as southern Japan have climates similar to those of China.

The China Type Climate is characterized by hot, humid summers and cold, dry winters (except winters are also humid in the natal variety). The dry seasons and rainy monsoons that characterise the climate cause huge temperature swings between winter and summer. Wintertime northern winds originate in high-latitude regions and are frigid and dry. Summertime southern breezes originate from sea regions at lower latitudes and are warm and humid. Monthly temperature variations range from 4 to 25 degrees Celsius and are strongly impacted by coastal factors.

On rare occasions, the temperature might drop to the freezing point due to the intrusion of icy air (Polar Vortex) from the interiors of continents. Frosts do occur, however, they are uncommon in the cooler interiors.

The average monthly temperature varies between 4 C and 25 C and is strongly modified by the sea effect. Occasionally, cold air (polar vortices) from continental interiors can lower temperatures to freezing. Although frosts are rare, they sometimes occur in cold interiors.

Rainfall is Moderate to high, 60 cm to 150 cm. Rainfall is distributed evenly throughout the year. Precipitation comes from convective sources or orographic rain in summer or depressions in long showers in winter. In summer, areas are affected by moist ocean airflow from subtropical anticyclonic cells. Local storms, e.g., Typhoons (tropical cyclones), and even hurricanes, happen.

The amount of rain is average, falling between 60 and 150 millimetres. This is adequate for all agricultural requirements and supports a wide variety of crops. Areas with a high population density are impacted by this climate. Throughout the year, rainfall follows a pattern that is largely predictable. Winter rain comes from depressions in persistent showers, whilst summer rain arrives from convectional sources or as orographic rain. In the summer, subtropical anticyclonic cells produce moist, marine airflow that impacts the areas. Tropical cyclones like typhoons and hurricanes frequently affect the area.

In the summer, a low-pressure zone is produced by intense internal temperature (Tibet, the desert region). This zone draws tropical Pacific air (South-East Monsoon). In contrast to India, the monsoon does not “burst” or “pour” as severely. In the late summer, between July and September, typhoons typically form.

Due to the intense pressure over Siberia in the winter, the extremely cold and dry North-West Monsoon surges out from the continent as the polar airstream. The windward slopes have a lot of snow, but there isn’t much rain. Another climatic factor associated with the southern China climate is typhoons.

It supports abundant vegetation. The lowlands consist of both evergreen forests and deciduous trees (hardwoods). In the highlands, there are a variety of conifers, such as pine and cypress, which are important softwoods. The forests of China and southern Japan have great economic value and include oak, camphor, etc. In southeastern Brazil, eastern Paraguay, and northeastern Argentina, there are Parana pine and quebracho (an axe breaker, very hardwood). Used for tanning). Eucalyptus forests are found in eastern Australia. In Natal, palm trees thrive. The Gulf states of the United States have inland deciduous forests.

The forests in southern Japan and China, which contain oak, camphor, and other trees, are also very economically valuable. In northeastern Argentina, eastern Paraguay, and south-eastern Brazil, you can find quebracho and parana pine trees (ax-breaker, an extremely hardwood used for tanning). Eastern Australia contains eucalyptus woodlands. In Natal, palm trees are found. The Gulf states of the United States of America have covered in lowland deciduous forests.

Despite having a huge domestic market due to its population, China produces a third of the world’s rice.

Monsoon China offers all the ideal conditions for padi production, including extensive lowlands with fertile moisture-retentive alluvial soil that can be irrigated if necessary, warm temperatures with moderate annual rainfall, and so on. Since flatlands are insufficient for rice cultivation, farmers move up the hill slopes and plant padi on terraced uplands. The Gulf states of the United States of America have covered in lowland deciduous forests.

The crop thrives in the muggy weather, scorching summer days, and frequent downpours.

It is grown throughout the Midwest, south of the Great Lakes, from the Gulf Coast through Nebraska, Iowa, Indiana, and Ohio, where it is most prevalent. This region produces more than 50% of the world’s maize, although just 3% of the grain is exported.

This is because most corn is used to fatten livestock, namely cattle and pigs. [Successful industry for beef and pork]The fattened animals are then transported to meat processing plants in Chicago and Cincinnati where they will be turned into “corned beef.”

The most lucrative cash crop grown in the Gulf states is cotton. The Gulf-like atmosphere is ideal for cotton growth. The crop’s lengthy, hot growing season, which includes 200 days without frost and a moderately high temperature, allows it to grow slowly and mature within six months.

In the deep south, in the Gulf areas, heavy rainfall has an impact on the lint. Because of this, this region is less suitable for cotton and is instead devoted to citrus crops, cane sugar, and market gardens, much like Florida.

Only the best locations, such as the Mississippi flood plains and the Atlantic coastlands, are used now for commercial cotton farming. The most dreaded foe in the Cotton Belt is the boll weevil. The pest swiftly spreads.

America’s original crop is tobacco. Virginian tobacco is well-known. Due to the humid environment, warmth, and well-drained soils of the Gulf states, tobacco can be successfully produced in a number of the eastern states of the United States. More than half of the tobacco used in international trade is produced in these nations.

The warm temperate eastern border is the most productive part of the latitudes. In addition to the widespread cultivation of maize and cotton, fruits and tobacco are also grown on the corn and cotton belts in the United States. Rice, tea, and mulberries are widely grown in monsoon China. Other products of economic importance have been found elsewhere, e.g., Sugarcane sugar in Natal, coffee and corn in South America, and dairy in New South Wales and Victoria.

The climate in China is one of the important climates since it impacts climatological parameters both individually and collectively. They also make a significant contribution to the environment. They are crucial in determining the direction of the country’s economy. It grants definite seasonal temperature changes.

What is a natal-type climate?

A warm, moist summer and a cool, dry winter that is significantly influenced by maritime influence are characteristics of the warm temperate eastern margin climate. The temperature is often comfortable and warm, yet occasionally cold air from the interiors of the continents may cause it to drop to the freezing point.

How many climate types does China have?

China can be categorised into six climate zones based on the range of temperatures found there: tropical, subtropical, warm-temperate, temperate, cold-temperate, and Qinghai-Tibet Plateau Temperate Zone.

What are the three primary climatic types?

The three primary climate zones on Earth are tropical, temperate, and polar.

Does China have a tropical climate?

The latitude, longitude, and altitude variations in China result in a very diverse climate. The Tibetan Plateau has a wide range of climates, including tropical in the extreme south, subarctic in the far north, and alpine at higher elevations.

Why is it called China type of climate?

On the eastern edges of continents, in the mild temperate latitudes just beyond the tropics, the China type of climate can be found. It is a Warm Temperate Eastern Margin variety that has extremely hot summers and extremely frigid winters.