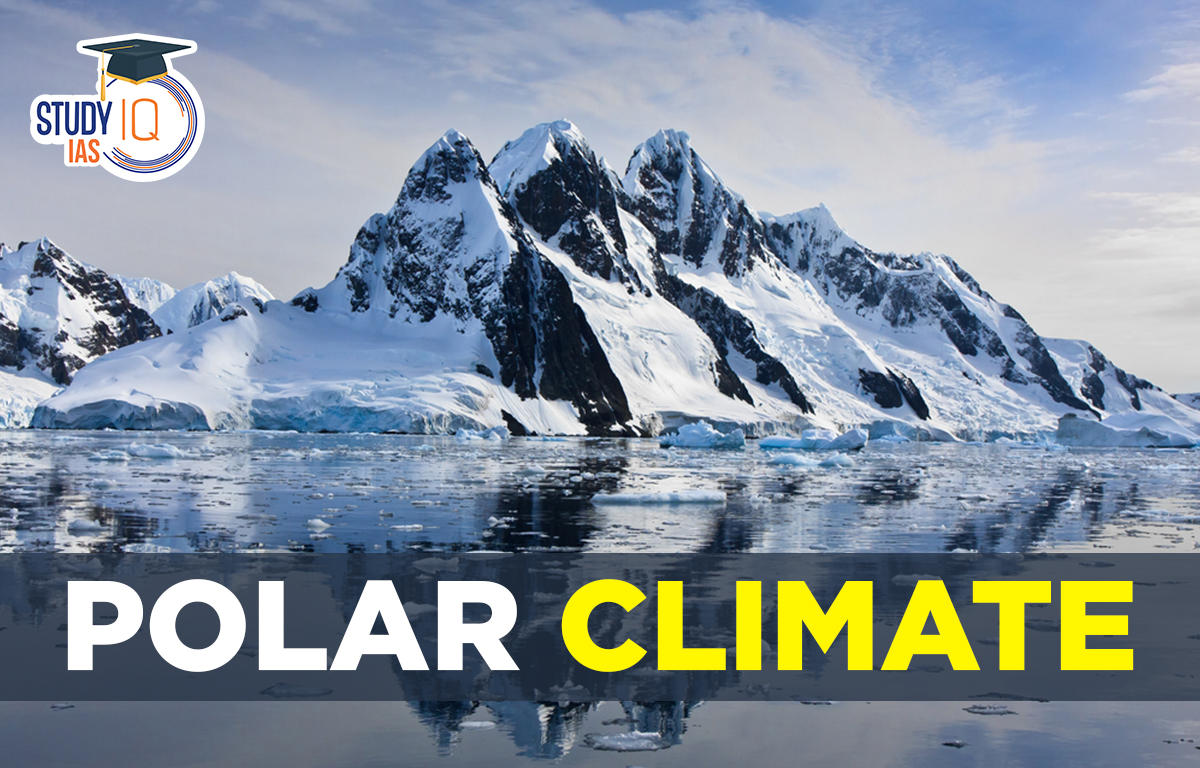 A polar climate has cool summers and extremely cold winters, resulting in treeless tundra, glaciers, or a permanent or semi-permanent layer of ice. The Köppen climate classification assigns it the letter E. Here are the complete details about the Polar Climate in this article, which is included in the UPSC IAS Exam’s Geography Syllabus.

Polar Climate and vegetation are found mainly north of the Arctic Circle in the northern hemisphere. Ice exists in Greenland and in the highlands of these high-latitude areas, where the ground is covered with permanent ice. The lowlands, with a few months without snow, have tundra vegetation. They include the coastline of Greenland, the desert plains of northern Canada and Alaska, and the Arctic Seaboard of Eurasia.

It has very low yearly temperatures, and June, the warmest month, seldom ever exceeds 10 °C. January is the middle of winter when inside temperatures can drop as low as 3 to 5 °C. Summer is cold and brief, whereas winter is long and brutal. The average year has four months with temperatures above freezing. There are weeks of nonstop darkness in the Arctic and Antarctic Circles (Rotation and Revolution). Plants cannot grow on frozen ground because it is still completely frozen. Frost can happen at any time, and blizzards with winds of up to 130 mph are not uncommon.

Snow is a sort of rain that accumulates during the winter and is removed by snowstorms. The way that snow falls differ from location to place; it could be huge, congealed snowflakes or snow crystals. Due to the limited evaporation and deficiency of moisture in the freezing polar air, convectional rainfall is typically absent. Sleet and snow make up the majority of the precipitation. Rainfall from convection is typically nonexistent.

Birds move north in the summer to feed on the countless insects that emerge when the snow thaws. Tundra environments are also home to mammals such as wolves, foxes, musk-ox, Arctic hares, and lemmings. Penguins are confined to the Antarctic.

The coast is where most human activity occurs in terms of both life and economy. Only ethnic groups like the Samoyeds, Lapps, and Eskimos reside here. Most of the tundra’s human activity is restricted to the coast. People lead somewhat itinerant lives. The Eskimos live in Greenland, Alaska, and northern Canada. They spend the winter months in small igloos. They eat fish, seals, walruses, and polar bears for food. Nowadays, guns are employed to locate animals instead of the more conventional harpoons.

Mineral discoveries have led to the growth of new towns. Copper is mined in Canada’s Rankin Inlet, petroleum is extracted on Alaska’s Kenai Peninsula, and gold is mined in Alaska. Iron ore deposits in Labrador are becoming more significant due to the diminishing reserves of iron ore in the Great Lakes region. For the purpose of transporting the ores to the St. Lawrence River, new railway lines have been built.

Rich iron ore reserves in Kiruna and Gallivare contributed to Sweden’s successful export trade in iron, steel, and other metallurgical goods. Shipments of lumber and fur from Siberia are now available because to new ports on the Arctic littoral of Eurasia. The ice-covered oceans are navigable thanks to modern icebreakers.

India, as one of the thirteen countries with Arctic Council Observer status, has a significant stake in the region.Mineral and oil resources are abundant in the area. The fact that so many maritime routes pass through the Arctic region adds to its importance.

In addition to affecting the availability of mineral and hydrocarbon resources, the negative consequences of climate change are also altering international trade lanes.

India has strategic, commercial, environmental, and scientific interests in the Arctic. For this reason, India has maintained a consistent and extensive relationship with the Arctic over the years. The goal of India’s Arctic Policy is to get the nation ready for a time when the greatest problems facing humanity, like climate change, maybe successfully solved.

It may be possible to improve the country’s strategy by creating a specialised expert committee to develop, monitor, steer, implement, and assess India’s Arctic policy.

Where are polar climates?

What is a polar climate example?

A polar climate can be found in Antarctica. A polar climate is one in which temperatures average less than 50 degrees Fahrenheit each month of the year, preventing warm summers.

Does India have a polar climate?

Jammu and Kashmir, Himachal Pradesh, and Uttaranchal have polar climates.

Which climate is best in India?

Between October and March is the best time to visit India because the weather is more likely to be warm, sunny, and dry. At this time of year, the north has clear blue skies.However, December and January are significantly cooler, with the possibility of fog, while the higher Himalaya can be very cold, but with clearer mountain views.

Does polar have 4 seasons?

The poles receive less energy and heat from the sun due to the Earth's tilt and orbit around the sun. As a result, there are only two polar seasons: summer and winter. The sun does not set in the poles during the summer, and it does not rise in the winter.