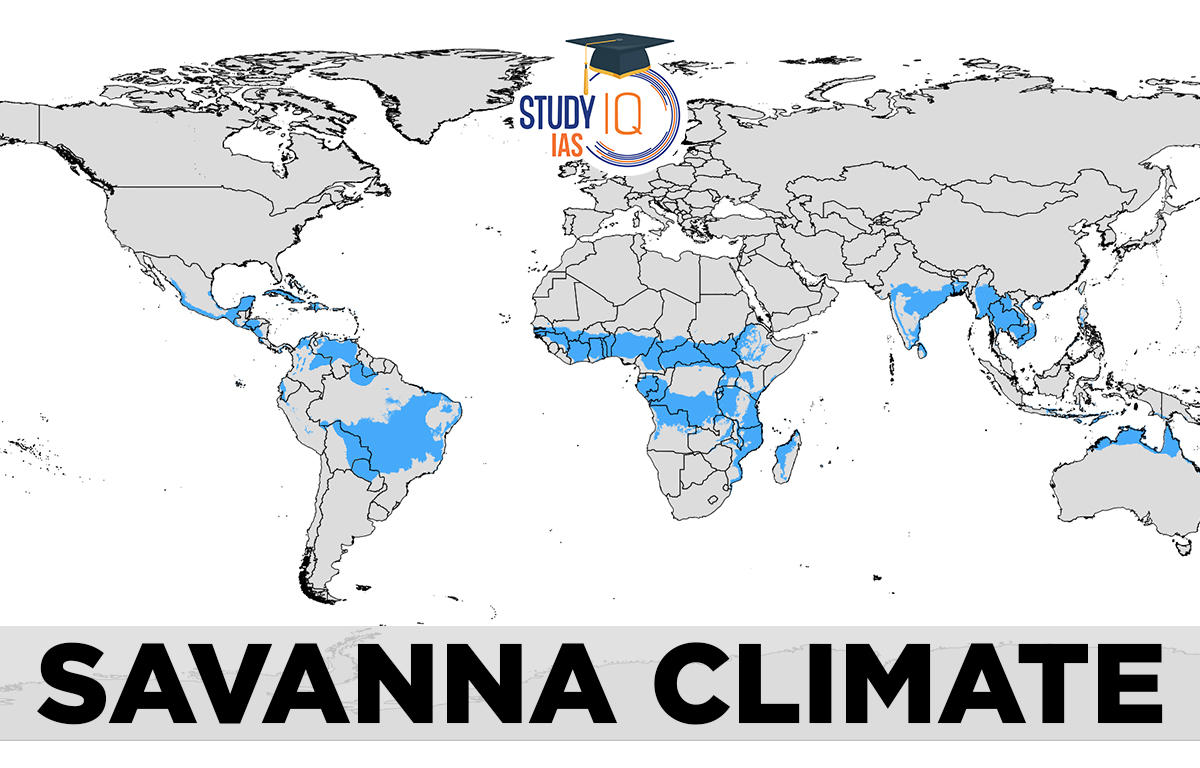 The Sudan Climate, also known as the Savanna Climate, is a transitional climate found between equatorial forests and trade wind hot deserts. It is restricted to the tropics and thrives best in Sudan, where the dry and wet seasons are most distinct, hence the name Sudan Climate.

Tall grass and short trees make up the vegetation. Parklands are a type of vegetation. The trees are deciduous, and their height and density decrease as one moves away from the equator.

Wild animals live in the savanna, particularly in Africa. It is known as a “big game country,” and each year, people from all over the world trap or kill thousands of animals. As a result, these areas have poor lateritic soils that are incapable of supporting good crops. Mid-latitude deserts and hot deserts.

The savanna or Sudan climate is a transitional type of climate found between the equatorial forest and the commercial desert hot deserts. It is confined to the tropics and thrives best in Sudan, where dry and wet seasons are very different, hence the name Sudanese climate. The belt contains West African Sudan and slopes southward into East Africa and South Africa. In South America, there are two distinct regions of the Savannah north and south of the equator, the Lanos of the Orinoco Basin and the Campos of the Brazilian Highlands.

In savanna-covered areas, a tropical wet and dry climate prevails. The average monthly temperature is 64° F or higher, and the annual precipitation ranges between 30 and 50 inches. During the dry season, less than 4 inches of rain is received for at least five months of the year.

The climate of Savanna is characterized by distinct wet and dry seasons. There is no special monsoon season like monsoon weather. The average annual temperature is higher than 18 degrees C. Monthly temperatures in inland stations are between 20 degrees C and 32 degrees C. The days are hot, and the nights are cold. This extreme daily temperature range is another feature of the Sudanese type of climate.

Average annual rainfall is 80 – 160 cm (decreases with distance from the equator). The rainy season begins in May in the Northern Hemisphere and lasts until September. The rainy season in the southern hemisphere is from October to March.

The Trade Winds are the region’s dominant winds, bringing rain to the coastal districts. They are most powerful in the summer, but by the time they reach the continental interiors or western beaches, they have dried out considerably.

The North-East Trades blow off-shore [continent to sea] from the Sahara Desert and arrive on the Guinea coast as dry, dust-laden winds.

Savannah’s landscape is covered with tall grass and small trees. Grasslands are also known as ‘bush-weld.’ Trees are deciduous and shed their leaves in cold and dry weather to prevent excessive water loss through transpiration. For example, Acacia trees usually have wide trunks with water storage devices to withstand prolonged drought. Most trees are umbrella-shaped, exposing only the narrow edge to strong winds.

In true savannah lands, the grass is long and stiff, reaching a height of 6 to 12 feet. Elephant grass also reaches a height of 15 feet. The grass appears green and well-nourished during the rainy season but turns yellow and dies during the subsequent dry season. As the rainfall decreases towards the desert.

Savannahs are called ‘Big Game Country’ because thousands of animals worldwide are trapped or killed every year. The savanna’s two main animal groups are grass-eating herbivorous animals and flesh-eating carnivorous animals. Vegetarians include zebra, deer, giraffe, deer, gazelle, elephant, and carnivores include lion, tiger, leopard, hyena, leopard, jaguar, and fox. Species of reptiles and mammals, including crocodiles, crocodiles, and large lizards with large rhinoceros and hippopotami, are found in rivers and swamp lakes.

Every year, people from all over the world trap or slaughter thousands of animals in the savanna, also known as “big game country.”

Several tribes live in the savanna region. Pastoralists such as the Masai of the East African plateau are cultivators, whereas the Hausa of northern Nigeria is established. In the Kenyan Highlands, white settlers took over the ancient grazing grounds of the Masai tribes for plantation agriculture (coffee, tea, cotton) and dairy production.

The Masai keep cattle solely for the production of milk. Cattle are not slaughtered for human consumption. Agriculture is an uncommon occurrence. The Hausa are a well-established farming community in Nigeria’s savanna lands. Their culture is more developed. They do not cultivate in a dynamic way. Instead, they clear some land and live there for a while.

Droughts can last for a long time due to inconsistency in rainfall. Political instability impedes the development of agricultural infrastructure. During the rainy season, heavy rains cause nitrate, phosphate, and potash leaching. Due to extreme heat and evaporation, the majority of the water evaporates during the dry season. As a result, many savanna areas have poor lateritic soils that are incapable of supporting high-yielding crops.

Many indigenous peoples are pastoralists, and the savanna is considered a natural cattle habitat.

However, the quality of the grass prevents large-scale ranching. Grasses here are no match for the nourishing and soft grasses of temperate grasslands. Cow breeds are also of poor quality, producing little meat or milk.

So far, there have been no significant beef or milk exports from the tropical grasslands. Only a few regions advanced with the adoption of science and technology. Queensland has surpassed Victoria as the leading cattle producer in Australia. Both meat and milk are exported.

Despite being in the tropics, Sudan’s climate varies from hyper-arid in the north to tropical wet-and-dry in the far southwest. Temperatures do not vary significantly by season in any location; the most important climatic variables are rainfall and the lengths of the wet and dry seasons.

The Savanna climate supports a diverse range of plants, including grasslands, hardy weather-resistant trees, and diverse flora and fauna. They also play an important role in global climate regulation, storing large amounts of carbon, for example. This article will focus on The Savannah or Sudan Climate that would be useful for UPSC IAS preparation.

What type of climate is in Sudan?

Despite being in the tropics, Sudan's climate varies from hyper-arid in the north to tropical wet-and-dry in the far southwest. Temperatures do not vary significantly by season in any location; the most important climatic variables are rainfall and the lengths of the wet and dry seasons.

In which season does rainfall occur in the Sudan type of climate?

Temperatures typically peak just before the rainy season. The majority of precipitation in South Sudan falls during the summer months and varies across the country.

Which state is found in the savanna climate in India?

What are the two seasons in Sudan?

Is Sudan hot or cold?

Sudan has to mean annual temperatures ranging from 26°C to 32°C, with summer temperatures in the north frequently exceeding 43°C. Rainfall in Sudan is unreliable and erratic, with significant differences between the northern and southern regions.