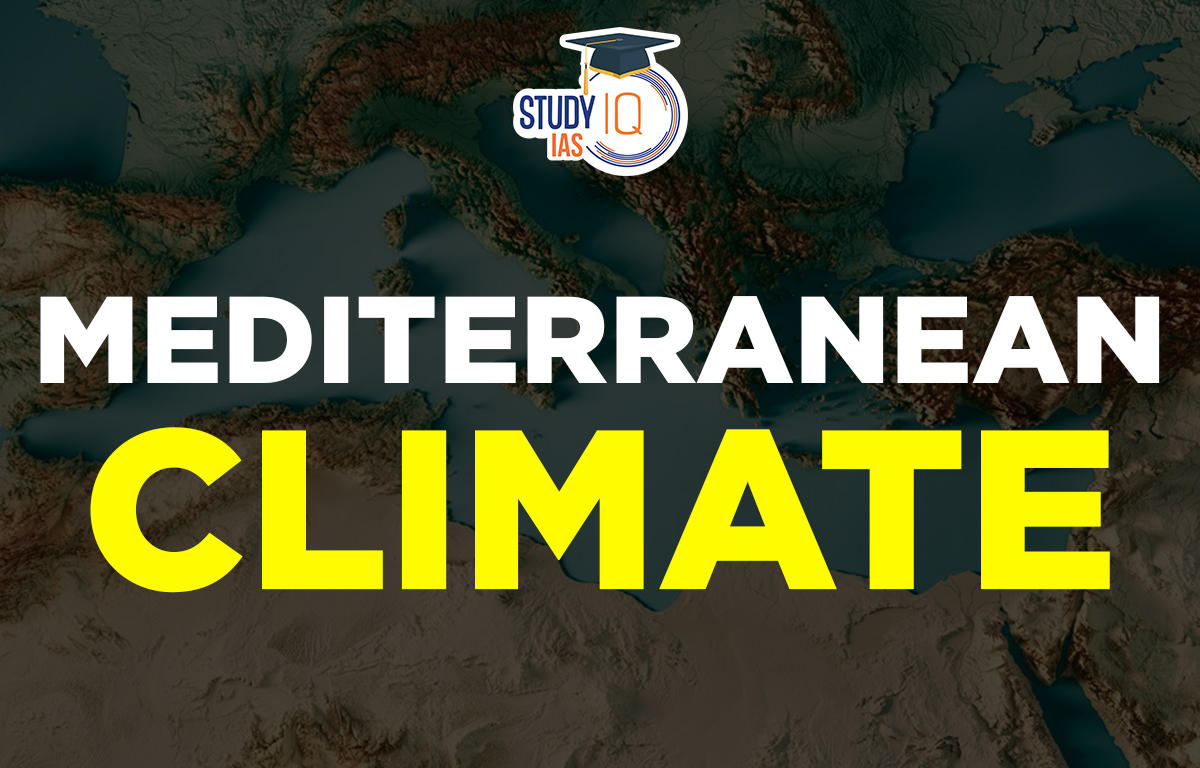 The Mediterranean climate provides protection for globally significant levels of plant diversity and endemism. As a result, all five regions have been designated as “biodiversity hotspots.”Mild wet winters and warm to hot, dry summers characterise the Mediterranean climate, which occurs on the west side of continents between 30° and 40° latitude.

The topic “Mediterranean Climate” is an important part of the UPSC/IAS Exam Geography Syllabus, and it is covered in depth in this article.

A Mediterranean Climate or dry summer climate is defined by dry summers and mild, wet winters.

The climate gets its name from the Mediterranean Basin, where it is most common. The subtropical ridge, which extends toward that hemisphere’s pole during the summer and moves toward the equator during the winter due to elevated north-south temperatures, is the primary contributor to the Mediterranean, or dry summer climate.

The warm temperate western marginal climate is found in some parts of the world. They are confined to the western part of the continents between 30 ° and 40 ° north and south of the equator. The root cause of this type of weather is the shifting of wind belts. It is characterized by winter rainfall, leading to the so-called Mediterranean climate. Other Mediterranean regions include California (around San Francisco), the southwestern tip of Africa (around Cape Town), South Australia (around southern Victoria and Adelaide, bordering St. Vincent and Spencer Bay), and southwestern Australia. (Swanland).

The annual precipitation ranges between 35 and 90 cm. Greater densities of precipitation in winter with coastal westerly winds.Mild winters, and prevailing local winds around the Mediterranean (Sirocco ). The temperature in the warmest month is greater than or equal to 100 degrees Celsius. Temperatures in the coldest month are less than 180°C but greater than -30°C. The climate is not extreme due to the cooling effect of water bodies.

The Mediterranean lands receive the majority of their precipitation when the Westerlies shift equatorward in the winter. In the northern hemisphere, on-shore Westerlies bring a lot of cyclonic rain from the Atlantic (Typical to Mediterranean Climate). Only a few days a week do heavy showers fall, with brilliant sunny intervals in between. This is another distinguishing feature of the Mediterranean winter rain. Downpours are uncommon, but they are frequently heavy, resulting in devastating floods in mountainous areas.

A variety of local breezes, some hot and others chilly, are common around the Mediterranean Sea. Two of them are Sirocco and Mistral.

These vast woodlands contain evergreen oaks. They can only be found in the most favourable climates. Normally, the trees are low, even stunted, with massive trunks, thin leathery leaves, and a water-seeking root system. Cork oaks are valued for their thick barks, which are used to make wine-bottle corks and are exported worldwide. In Australia, eucalyptus forests have largely replaced evergreen oak woodlands. The massive redwood tree is a common sight in California.

Evergreen trees with needle-shaped leaves and tall, straight stems, such as pines, firs, cedars, and cypresses, are examples.

Agriculture in the Mediterranean region is well known. Mediterranean agriculture encompasses everything from food crop production to planted crop cultivation such as olives, figs, and dates, as well as fruit and vegetable farming. The most important crop grown in this region is wheat.

Trees have short, broad leaves and are not very long. Lack of shade is a characteristic feature of Mediterranean lands. Hot, bright summers and cold, humid winters allow a wide variety of crops to be grown. The Mediterranean region is also known as the world’s orchard lands. Many citrus fruits such as oranges, lemons, limes, citrons, and grapes grow.

During the long summer drought, the deep roots of the fruit trees draw water from great depths. Citrus fruits have a thick, leathery covering that prevents them from sweating excessively. The Mediterranean region accounts for 70% of global citrus fruit exports.

The olive tree is without a doubt the most emblematic of all cultivated plants in the Mediterranean. Olive oil is a valuable source of cooking oil in areas where animal fat is scarce. Many nut trees are planted, including chestnuts, walnuts, hazelnuts, and almonds, and the nuts are harvested as fruits or for the chocolate industry.

The most important food crop is wheat. Barley is the second most popular cereal. The alpine pastures’ milder environment supports a few sheep, goats, and cattle. Transhumance is a well-known way of life (moving up and down the hills in search of pastures according to seasons).

Despite the fact that Mediterranean-Climate regions cover less than 2% of the world’s land area, the five regions’ combined vascular plant flora accounts for roughly 20% of all plant species. Furthermore, these Mediterranean-climate zones are widely regarded as some of the most endangered ecosystems on the planet.

What is called Mediterranean climate?

Summers are hot and dry, while winters are humid and cool. It can also be unpredictable, with heavy rain or high winds like the Sirocco and Mistral. The vegetation and wildlife of the region are significantly impacted by this climate.

What is special about the Mediterranean climate?

The rainy season in the Mediterranean climate occurs during the winter months, when the sun is at its lowest.

Why Mediterranean climate is called the Garden of the world?

Because of the winter rainfall, this area is ideal for citrus fruit cultivation. The region is well-known for its winemaking. Approximately 70% of citrus fruits are grown and exported here. As a result, it is referred to as the world's garden.

What are 4 characteristics of the Mediterranean climate?

Why Mediterranean climate is the special?

The Mediterranean climate is known for its distinct regional characteristics, which include large seasonal temperature and rainfall contrasts, strong wind systems, intense precipitation, and Mediterranean cyclones.