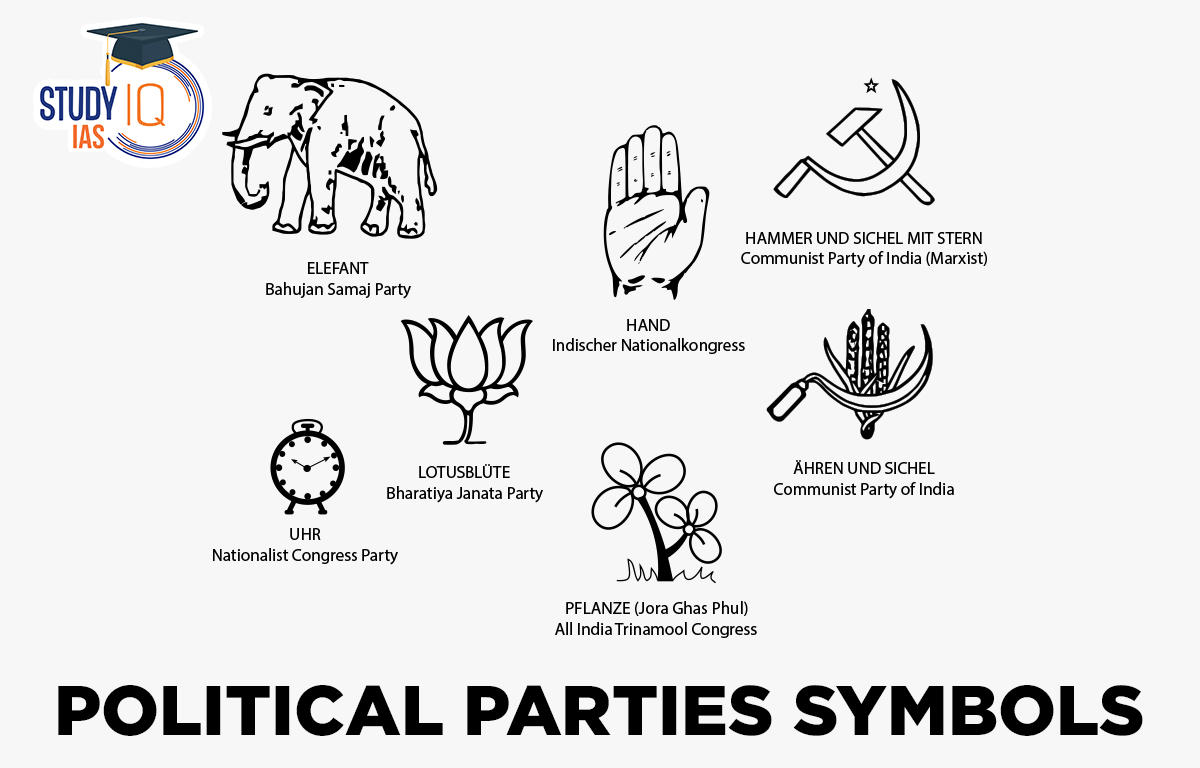 A voter must mark a symbol on their ballot in order to vote for the associated party. Parties utilise these symbols in their campaigning. One of their goals is to make voting easier for those who are illiterate and cannot read the names of the candidates on the ballot.

On Indian ballot papers, political parties are identified by their names and a visual emblem. The visual emblem makes it easier for the majority of voters who lack literacy to choose which party to support. The Indian Election Commission assigns the party logos. Other parties inside the nation are not permitted to use a symbol given to a party that has been designated as a national party. A symbol given to one state party may be given to another state party in another state.

A political system’s key element is the political party. A political party is a type of organization with leaders, adherents, policies, and programs. Its supporters may be formally affiliated with the party or they may provide it support without being formally affiliated. There are various groups. Parties can be distinguished based on their leaders, policies, and programs, as well as their beliefs and internal workings.

A political party’s primary characteristic that sets it apart from other organizations is that its main goal is to seize power. A pressure group, interest group, or non-party civil society organization often does not strive to gain power, in contrast to a political party. However, these groups occasionally run in elections. Political parties serve as crucial ties between the federal government, the state, and society. Political parties impact debates and policies on issues affecting the interests of diverse social groups in a political system by serving as the primary link between social process and policy-makers.

There are three types of party systems:

There isn’t any competition under a one-party system. Here, there is only one party that nominates candidates, and there are only two options available to voters:

Such a political structure has been prevalent in communist and autocratic nations like China, North Korea, and Cuba. This system was also common in the USSR before communism fell.

The two main, dominating parties alternate holding the reins of power in a two-party system. Therefore, in order to win the election, the winner must receive the most votes. Please be aware, though, that a majority of votes does not necessarily equal the maximum number of votes.

As a result, the smaller parties frequently combine with the larger parties or withdraw from elections. In Canada and Great Britain, where two parties possess the most seats, this type of parliamentary system is in place.

The multi-party system is the third and most prevalent type of government. In such a system, there are three or more parties, each of which is capable of forming a coalition to form the government.

If no party wins a majority of the seats in the legislature, several parties band together to create a coalition government. India and other nations use a multi-party system. Some believe that a multi-party system frequently causes political instability in a nation.

There would be no independent candidates in this election. Any candidate cannot effectively promise the public a significant change in government policy. In such a case, nobody would be in charge of managing the nation.

Only a representative democracy can endure throughout time. Political parties are the organizations that collect various points of view and submit them to the government.

The two party systems in Britain and the United States are not comparable to the party system in use in India.

Prior to independence, the Congress served as a broadly based nationalist organisation. Since then, it has evolved into the country’s main political force. Because of this, Indian political commentators like Morris Jones have referred to the Indian Party system as one of “one party dominance.” While Rajni Kothari went so far as to refer to the “Congress System” or the “One Party Dominance System”.

Since the disintegration of the consensus based Congress system in 1967, the Indian Parties have fit the category of a multi-party system. India has as many as Seven National Parties and 48 State parties.

There is no effective, well-organized opposition party in India. A powerful opposition is necessary for parliamentary democracy to succeed. The opposition’s primary role is to draw attention to the government’s flaws and to pressure it to respond to the public’s views.

The leadership position is valued in the Indian party system. A party begins to deteriorate after its charismatic leader leaves. Congress suffered as a result of the passing of Mrs. Indira Gandhi and Jawaharlal Nehru. The Jan Sangh experienced irreparable loss as a result of Dr. Shyama Prasad Mookherjee’s passing. Similar to how Dr. Ram Manohar Lohia and C. Rajagopalachari saw the socialist forces and Swatantra Party, respectively, rapidly fall.

Politics in India are becoming more issue-based than ideological. The National Front Government’s existence at the centre was a cartoonish example of issue-oriented politics that drew support from both the far-left CPI(M) and the far-right (BJP). Since 1971, issues that are of urgent importance to the people have won elections rather than the inherent strength of a political party’s philosophy.

In India, a number of national parties have seen a decline in strength while regional parties have increased in size and influence. As a result, the DMK and ADMK have established strongholds in Tamil Nadu, the Akali Dal rules the Punjab, the AGP controls Assam, the National Conference controls Jammu and Kashmir, and the Shiv Sena has become a significant player in Maharashtra politics.

Soon after the nation gained independence, a few regional parties including the DMK, Shiromani Akali Dal, and National Conference were formed. These parties express and work to defend an ethnic or religious-cultural identity that is specific to the region.

Factions within the Parties

All political parties have a history of division. The faction leaders in non-communist parties are frequently community, caste, or religious leaders who have cultivated patron-client relationships among members of various castes or communities.

Such factional leaders form political alliances with one another to keep their political rivals out of power as they compete among themselves for political dominance within the party and the government. The majority of these factional partnerships lack an ideological component and frequently change, keeping the parties in a state of flux..

Communalism is a phenomenon that is not exclusive to India and other Asian nations; it is also present in many other countries, including Germany, Sweden, Denmark, and others. What is strange about India is that even those who identify as secular parties and individuals take an opportunistic stance toward communalism.

The Use of Extra-Constitutional Means to Power

Although it is commonly believed that the primary duties of political parties are to engage in electioneering and campaigning in an effort to obtain the most seats possible in public offices, few few parties are able to achieve decent results utilising solely these legal strategies.

Politics of Defection and Anti-Defection Act

Defection is the term used to describe an opportunistic change in political party affiliation. When a lawmaker runs for office on the platform of one party but afterwards moves to another without the consent of his supporters, this is known as defection.

The Anti-Defection Act of 1985 attempted to prevent defections so that elected officials would not be permitted to violate the confidence placed in them by the electorate at the time of their election.

Recognition of National Parties of India

The use of that party’s election emblem in elections across India is prohibited unless it is recognised as a national or state party. There needs to be just one proposer per recognised “State” and “National” party to submit a candidacy.

Two sets of electoral rolls are provided by the Election Commission free of charge to the recognised “state” and National Parties. Additionally, candidates running in the general elections on the platforms of national or state parties receive a complimentary copy of the electoral roll. For the purpose of establishing their party offices, the National parties obtain property or buildings from the government. National parties have a cap of 40 celebrity campaigners, whereas other parties have a cap of 20.

The election expenses of the party candidate do not include the costs associated with the travel and other expenses of prominent campaigners. National Parties are given a time slot on state and national television and radio to address the public and spread their message. On August 22, 2016, the Election Commission modified a rule so that it will now evaluate the national and state status of political parties every ten years rather than every five.

Regardless matter how well it performs in the following elections, a political party that has been recognised as a national or state party keeps that status. It only loses the granted status if it fails to meet any requirements for two successive Assembly sessions and two consecutive Lok Sabha sessions.

At the regional level, they offer improved governance and a stable government. They provide a threat to the nation’s one-party dominating system and have reduced the power of the one party.

Regional Parties increase political competition and widespread citizen participation at the grassroots level. In both the parliamentary and assembly elections, they give voters more options. The party that seeks to advance the interests of the state or region may receive the support of the electorate.

Regional Parties raise peoples’ interest in politics as well as their political awareness. They highlight regional or local problems, which grab the public’s attention right away. They offer protection from the central government’s totalitarian tendencies. They challenge the dominant party’s position on some topics and pressure it to adopt a more acceptable strategy for resolving disputes.

Q How many political parties are?

Ans. As per latest publication dated 23 September 2021 from Election Commission of India, the total number of parties registered was 2858, with 8 national parties, 54 state parties and 2796 unrecognized parties.

Q What are the 4 types of political parties?

Ans. Political scientists have distinguished between different types of political parties that have evolved throughout history. These include cadre parties, mass parties, catch-all parties and cartel parties.

Q What are the 3 parties of government?

Q Why are political parties important?

Ans. On Indian ballot papers, political parties are identified by their names and a visual emblem. The visual emblem makes it easier for the majority of voters who lack literacy to choose which party to support. The Indian Election Commission assigns the party symbols.

How many political parties are?

As per latest publication dated 23 September 2021 from Election Commission of India, the total number of parties registered was 2858, with 8 national parties, 54 state parties and 2796 unrecognized parties.

What are the 4 types of political parties?

Political scientists have distinguished between different types of political parties that have evolved throughout history. These include cadre parties, mass parties, catch-all parties and cartel parties.

What are the 3 parties of government?

Why are political parties important?

Why do political parties need symbols?

On Indian ballot papers, political parties are identified by their names and a visual emblem. The visual emblem makes it easier for the majority of voters who lack literacy to choose which party to support. The Indian Election Commission assigns the party symbols.