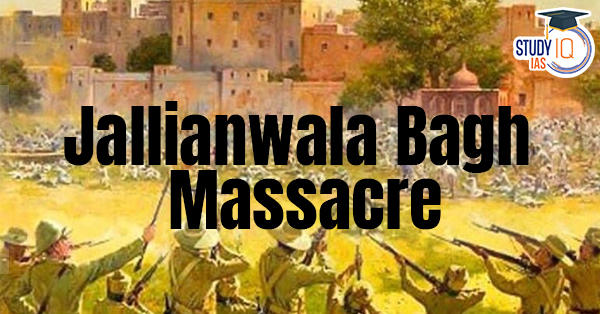 The Jallianwala Bagh Massacre, also known as the Massacre of Amritsar, occurred on April 13, 1919, when British troops opened fire on a sizable crowd of unarmed Indians in an open area known as the Jallianwala Bagh in Amritsar, Punjab region (now in Punjab state), killing several hundred and injuring many more. Jallianwala is also spelled Jallianwalla. It was a pivotal moment in modern Indian history because it permanently damaged Indo-British ties and paved the way for Mohandas (Mahatma) Gandhi to fully dedicate himself to the cause of Indian nationalism and independence from Britain.

The massacre had been planned, and Dyer proudly boasted that he had done it to have a “moral effect” on the populace and that he had resolved to shoot down all men if they continued to gather. He wasn’t sorry at all. When he arrived in England, numerous citizens of that country raised money in his honour. Others were horrified by this horrible deed and requested an investigation. It was referred regarded as one of the deadliest massacres in recent history by a British newspaper.

Michael O’Dwyer, the Lt. Governor of Punjab at the time of the Jalliawala Bagh Massacre, was assassinated on March 13, 1940, by Indian revolutionary Udham Singh. Indians were incensed at the massacre, and the government responded with additional brutality. People were forced to crawl on the streets of Punjab. They were flogged after being placed in an open cage. Newspapers were outlawed, and the editors of those papers were imprisoned or deported. Similar to the one that ensued after the 1857 uprising was put down, a reign of terror was enacted.

The colony was placed under the direct rule of the British Crown in 1859. The colonial government used the First World War as an opportunity to introduce the Defence of India Act in 1915 because it had long harboured fears of dissent and conspiracies. The government was given tremendous powers throughout the conflict, including the ability to detain people without cause, imprison them without charge, and impose travel, writing, and speech restrictions. It introduced the Anarchical and Revolutionary Crimes Act (often referred to as the Rowlatt Act) in March 1919, extending its wartime emergency powers into peacetime.

Gandhi had returned to India from South Africa after living there for 21 years not long after the war started. In the First World War, Gandhi sided with Britain out of allegiance to the British Empire. For the first several years after his return to India, Gandhi led nonviolent uprisings against regional injustices. Gandhi promptly voiced his opposition to the upcoming Rowlatt legislation and called for a general strike on April 6th, 1919, as soon as the news of it became known to the public. He urged people to participate in satyagraha, or nonviolent protest, by holding meetings and fasting for a day in order to call for the legislation’s repeal.

Punjab was already observing heat of many events happening. Because Punjab was a crucial economic and strategic asset for the British, the turmoil worried them particularly. Three-fifths of the British Indian Army, which was heavily deployed in World War I, was made up of soldiers from Punjab by that point. General Dyer, who had been sent to Amritsar, seized command on April 11 in order to bring the area back to normalcy. He issued a decree outlawing public assemblies and threatening to violently disperse them.

Thousands of people assembled in Jallianwala Bagh on April 13 in defiance of General Dyer’s instructions. Unarmed citizens were shot at by General Dyer. Ten minutes of shooting were put in. The government estimated 379 deaths, while some estimates were much higher.

How Many Died in Jallianwala Bagh Massacre?

The number of fatalities during the Jallianwala Bagh Massacre was not officially recorded. However, the official British investigation indicated that 379 people died, and the Congress stated that more than 1200 people killed in the massacre.

All illusions about the British government’s benevolent control in the nation were dispelled when the British public praised and rewarded General Dyer, the massacre’s perpetrator. The nation as a whole was shocked by the massacre’s severity. On April 18, Gandhiji halted his movement after being overcome by the atmosphere of violence. After receiving the honorific Kaiser-i-Hind from the British for his contributions to the Boer War, Mahatma Gandhi renounced it. The poet and Nobel Prize winner Rabindranath Tagore refused to accept his knighthood. The shooting was deemed “monstrous” by Winston Churchill, who also condemned it.

Jallianwala Bagh caused British justice to lose its credibility. On October 14, 1919, the Indian government established the Hunter commission committee to investigate the incidents in Punjab. The commission’s mandate was to look into the disturbances in Punjab, determine their root cause, and develop solutions to deal with their impacts. General Dyer’s behaviour was sharply condemned, but no action was taken against him, according to the commission’s findings. The Jallianwala Bagh slaughter served as a catalyst for the rebellion against the unique colonial rules.

Jallianwala Bagh, which is now a significant landmark in India, played a significant role in the history of that nation’s war for independence. One of the factors that prompted Mahatma Gandhi to launch the Non Cooperation Movement, his first extensive and ongoing peaceful protest (satyagraha) campaign, was the Jallianwala Bagh tragedy (1920-22).

Rabindranath Tagore, a Nobel Prize-winning poet from Bengal, resigned the knighthood he had been awarded in 1915. The incident was investigated by the Hunter Commission, which was commissioned by the Indian government at the time. In 1920, Dyer was censured for his conduct and ordered to leave the military.

Ans. Records kept by the British government show that the indiscriminate firing ordered by Colonel Reginald Dyer resulted in the deaths of 379 individuals, including men, women, and children, and more than 1,000 injuries.

Q How many Indians were killed in Jallianwala?

Ans. According to the British administration, the Jallianwala Bagh massacre resulted in 379 fatalities and 1,200 injuries. Records claim that close to a thousand people were killed.

Q What happened to General Dyer after the massacre?

Ans. His troops killed 379 unarmed Indian men, women, and children, and wounded about 1,200, according to an official report. Dyer was consequently demoted from leadership and placed into forced retirement. The issue gained attention on a global scale, and Indian nationalists converted the location into a martyrs’ memorial.

Q Did anyone survive the Jallianwala Bagh Massacre?

Ans. At the age of 113, Shingara Singh, the final survivor of the Jallianwala Bagh Massacre, died in Amritsar on June 29, 2009.

Ans. Jallianwala Bagh is a memorial built by the Indian government at the same location in 1951 in honour of the people who were slaughtered during a peaceful demonstration against the British Raj on April 13, 1919, the occasion of the Punjabi New Year. General Dyer ordered firing that resulted in more than 1500 fatalities and more than 1000 injuries.

Q Who was the eyewitness of Jallianwala Bagh Massacre?

Ans. Girdhari Lal who saw massacre from a nearby rooftop: There were small outlets, four or five in all, and bullets actually rained over the people at all these gates.

Q Why do people gathered in Jallianwala Bagh?