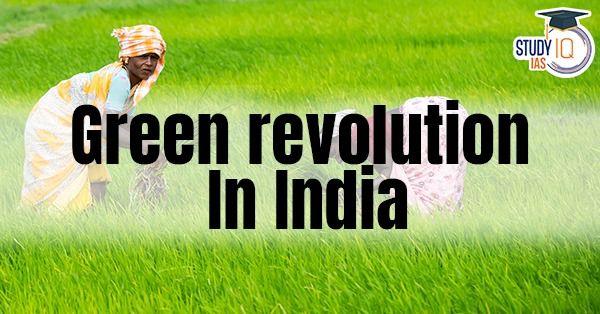 The Bengal Famine, which occurred in 1943 and was the worst food crisis ever recorded, caused an estimated 4 million people to die of starvation in eastern India. Even after independence in 1947, the government’s focus on enlarging the agricultural lands persisted until 1967. However, the rate of population growth was outpacing the rate of food production. To boost yield, an immediate and dramatic intervention was required. The Green Revolution served as the catalyst for the action.

With the assistance of a geneticist also known the Father of The Green Revolution (India), M.S. Swaminathan, the Indian government began the Green Revolution in 1965. The country’s status was transformed from one of the world’s leading agricultural nations as a result of the green revolution, which was a huge success.

It began in 1967 and continued until 1978. The term “green revolution” in India refers to a time when contemporary agricultural practices and technology, such as the use of HYV seeds, tractors, irrigation systems, pesticides, and fertilizers, transformed Indian agriculture into an industrial system. India’s Green Revolution increased agricultural output, particularly in Haryana, Punjab, and Uttar Pradesh.

The Green Revolution in India has several specific characteristics.

Wheat, rice, jowar, bajra, and maize were the principal crops. Grain products other than food were not included in the new strategy’s scope. For many years, wheat remained the foundation of the Green Revolution.

In 1978–1979, a tremendous increase in crop production led to a grain output of 131 million tones, making India one of the largest agricultural producers in the world. The area of crops planted with high-yielding wheat and rice varieties increased significantly during the Green Revolution. India was able to become self-sufficient in food grains and occasionally even had enough stock in the central pool to export grains. Additionally, there are now more food grains available per person on a net basis.

The Green Revolution’s introduction assisted farmers in increasing their level of revenue. Farmers invested their extra money back into their fields to increase productivity. The major farmers who had more than 10 hectares of land gained the most from this revolution because they made significant financial investments in HYV seeds, fertilizer, machinery, etc. It supported capitalist farming as well.

Due to fertilizer use and multiple cropping, there was a noticeable increase in the need for laborers. The Green Revolution produced a large number of jobs for both industrial and agricultural employees by building connected facilities including factories and hydroelectric power plants.

Although the revolution has benefited all food grains, including wheat, rice, jowar, bajra, and maize, other crops including coarse cereals, pulses, and oilseeds have been excluded. Major cash crops including sugarcane, cotton, jute, tea, and cotton were also largely unaffected by the Green Revolution. Only five crops were allowed under the High Yielding Variety Program (HYVP): maize, wheat, rice, jowar, and bajra. Therefore, the new method did not apply to non-food grains. The HYV seeds in the non-food crops either hadn’t been developed yet or weren’t good enough for farmers to take a chance on using them.

Growing regional and international economic imbalances are a result of the Green Revolution’s technological advancements. Only 40% of the overall cultivated area has been impacted thus far, while 60% is still unaffected. Punjab, Haryana, and western Uttar Pradesh in the north, and Andhra Pradesh and Tamil Nadu in the south, are the region’s most severely impacted.

The Eastern region, which includes Assam, Bihar, West Bengal, and Orissa, as well as the dry and semi-arid regions of Western and Southern India, has rarely been affected. Only those places that were already in a better position agriculturally were impacted by the Green Revolution. Thus, the Green Revolution has caused the issue of regional inequality to worsen.

Pesticides and synthetic nitrogen fertilizers were widely used during the Green Revolution to improve irrigation systems and crop types. To inform farmers about the substantial risk involved with the intensive use of pesticides, however, very little or no effort was taken. Typically, uneducated farm laborers sprayed pesticides on crops without taking any safety precautions or following any instructions. Crops suffer more harm than benefit from this, and it also pollutes the environment and soil. The crops which were developed at the time of the green revolution required a lot of water.

The majority of these crops, which are cereals, used roughly 50% of the water used by the human body. Groundwater levels were depleted as a result of the introduction of canal systems and irrigation pumps that drained groundwater out of the ground to irrigate crops like rice and sugarcane that require large amounts of water.

The nutrients in the soil were depleted by repeated crop cycles meant to ensure higher crop yield. Farmers used more fertilizer to fulfill the needs of new varieties of seeds. The use of these alkaline compounds caused the pH level of the soil to rise. Beneficial pathogens were eliminated by toxic chemicals in the soil, which further decreased production.

Farm mechanization brought about by the Green Revolution led to widespread unemployment among agricultural laborers in rural areas, with the exception of Punjab and to a lesser extent Haryana. The poor and laborers who were without land were most negatively impacted. Numerous serious ailments, such as cancer, renal failure, stillbirth, and birth deformities, were caused by the extensive use of chemical fertilizers and pesticides.

There have been numerous cropping pattern adjustments and agricultural advancements in India as a result of the country’s green revolution.

Farmers today enjoy wealth thanks to the Green Revolution. Agriculture is thought of as a lucrative profession. The demand for consumer products has surged in Punjab. In Punjab, the standard of living has increased. All crops, including wheat, rice, cotton, gram, maize, and bajra, have increased per hectare production. Better seeds are the cause. The Green Revolution has had a significant impact on industry development. Industries have been put up that produce agricultural equipment like tractors, diesel engines, combines, threshers, and pumping sets.

Production growth is the Green Revolution’s primary accomplishment. 33.89 lakh tones of cereal grains were produced in 1965–1966. The output increased to 119 lakh tones in 1980–1981 The rural masses now enjoy wealth thanks to the green revolution. Bumper crops have given rural populations work options. Their quality of life has improved. The need for labor rose as a result of multiple cropping and excessive usages of chemical fertilizers. A severe labor shortage is seen during the sowing and harvesting seasons. Consequently, the green revolution has created jobs..

Q. Who is started Green Revolution in India?

Ans. M S Swaminathan is referred as the Father of Green Revolution in India as he founded it. He was inspired from the initiative of Norman Borlaug.

Ans. In India, the Green Revolution was mainly led by M.S. Swaminathan. The Green Revolution resulted in a significant increase in production of food grains (especially wheat and rice) due to the introduction into developing countries of new, high-yielding variety seeds, beginning in the mid-20th century.

Q. What did the Green Revolution do for India?

Ans. The green revolution led to high productivity of crops through adapted measures, such as increased in the area under farming, double-cropping method, which includes planting two crops rather than one, annually, adoption of HYV of seeds, highly increased use of inorganic fertilizers and pesticides, and improved cropping pattern

Q. Where was the Green Revolution introduced in India?

Ans. The Green revolution started in India started with its introduction in Punjab in 1966. It was part of a development program that was registered by the government of India along with international donor agencies.

Q. Was Green Revolution a success in India?

Ans. The Green Revolution yielded great economic productivity during its early years. In Punjab, where it was first introduced, the Green Revolution led to significant increases in the state’s agricultural growth, supporting India’s overall economy.

Other Major Incidents in Indian History