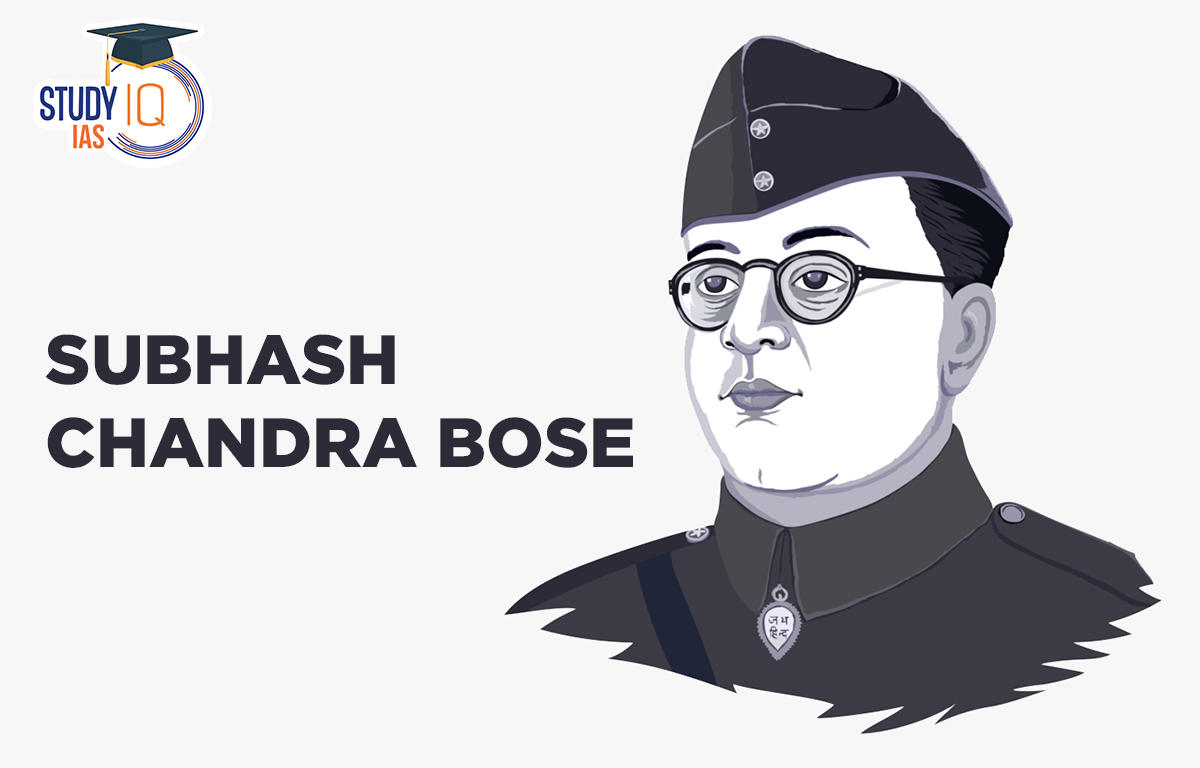 The patriotism of Indian Nationalist Subhash Chandra Bose has left a lasting impression on many Indians. He is well-known for founding the organization “Azad Hind Fauj,” and his slogan is “Tum Mujhe Khoon Do, Main Tumhe Azadi Dunga.”

The burn injuries he sustained in a plane crash caused Netaji Subhash Chandra Bose to pass away on August 18, 1945, at a hospital in Taiwan. On January 23, 1897, he was born in Cuttack, Orissa.

The most well-known liberation fighter, Subhash Chandra Bose possessed exceptional leadership qualities and was a charismatic orator. His slogans include “Delhi Chalo,” “tum mujhe khoon do,” and “main tumhe azadi dunga.” He established Azad Hind Fauj and made numerous contributions to the fight for India’s independence. He is renowned for his socialist policies as well as for the forceful tactics he utilized to win independence.

The son of Prabhavati Dutt Bose and Janakinath Bose, Netaji Subhash Chandra Bose was born in Cuttack, Orissa, on January 23, 1897. His father had the title of “Rai Bahadur” and was a well-known lawyer in Cuttack. Like his siblings, he attended the Protestant European School in Cuttack, which is now Stewart High School. He completed his undergraduate studies at Presidency College. After reading their writings at the age of 16, Swami Vivekananda and Ramakrishna’s teachings had an impact on him. Then, in order to prepare for the Indian Civil Service, his parents sent him to the University of Cambridge in England. In 1920 he passed the civil service examination, but in April 1921, after hearing of the nationalist turmoil in India, he resigned his candidacy and hurried back to India.

Bhagavad Gita had an impact on him, and he saw it as a source of inspiration for the fight against the British. From a young age, Subhash Chandra Bose was highly affected by the Universalist and nationalistic ideas of Swami Vivekanand.

He was drawn to the ideas of socialism and communism when he was a member of the Congress party. However, he thought it would succeed in India if National Socialism and Communism were to be combined. He favoured gender equality, secularism, and other liberal ideologies, but he didn’t think democracy was ideal for India.

He joined the Non Cooperation Movement, which Mahatma Gandhi founded and turned into a potent non-violent movement. Mahatma Gandhi recommended he collaborate with Chittaranjan Das, who later served as his political mentor, during the agitation. Following that, he worked as a youth educator and volunteer commander for the Bengal Congress. He founded the “Swaraj” newspaper. After being released from prison in 1927, Netaji Subhash Chandra Bose joined the Congress party as general secretary and fought for independence with Jawaharlal Nehru. 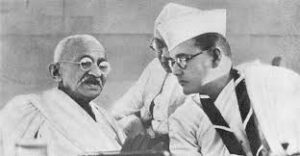 At the time of the Civil Disobedience Movement Bose was in detention for linking with a Bengal revolutionary group. He became the Mayor of Calcutta while in prison. Thereafter he was released and detained several times on suspected links to revolutionary groups. Finally, he was released on grounds of poor health and allowed by the government to go to Europe. He returned from Europe in 1936 and remained in detention for about a year.

After being elected president of the Indian National Congress in 1938, he established a national planning committee and developed a wide industrialization agenda. However, Gandhian economic theory, which stuck to the idea of cottage industries and profiting from the utilization of the nation’s own resources, did not agree with this. When Subhash Chandra Bose won his reelection bid in 1939 over a Gandhian opponent, it served as vindication for him. Nevertheless, the “rebel president” felt compelled to step down because Gandhi didn’t back him.

Subhash Chandra Bose evaded house arrest in 1941 and left India wearing a disguise. Adolf Hitler even met with him, and he began to receive backing from Nazi Germany. He established the Free India Center in Berlin and recruited Indian POWs who had previously fought for the British in North Africa before being captured by Axis troops to form the Indian Legion, which now numbers about 4500 soldiers.

The Indian soldiers of the Indian Legion and representatives of the Special Bureau for India in Berlin placed the title of Netaji on Bose in Germany in 1942. Nazi Germany was slipping backwards in the west in the years 1942–1943 when World War II was in full flow. Japanese forces were rapidly approaching in the east. The Bengal Famine and the Quit India campaign were both raging in India. Subhash Chandra Bose left for Japan in 1943 after experiencing failure in Germany.

The establishment and efforts of the Azad Hind Fauj commonly referred to as the Indian National Army, or INA, during the Second World War were a significant development in the struggle for liberation. With the help of Indians living in Southeast Asian nations, Rash Behari Bose, an Indian revolutionary who had fled his country and spent many years living in Japan, founded the Indian Independence League.

The league created the Indian National Army from among the Indian POWs with the intention of releasing India from British domination after Japan defeated the British army and seized nearly all of the Southeast Asian nations. The organization of this force was greatly aided by General Mohan Singh, a former officer in the British Indian army.

Subhash Chandra Bose, who was working for India’s independence, fled India in 1941 and went to Germany. He arrived in Singapore in 1943 to head the Indian Independence League and develop the Indian National Army (Azad Hind Fauj) into a powerful tool for India’s freedom. About 45,000 soldiers made up the Azad Hind Fauj, including Indian prisoners of war and Indians who had settled in various Southeast Asian nations. 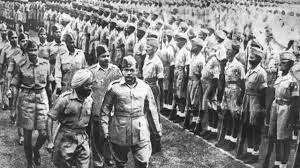 Netaji Subhash Chandra Bose announced the establishment of the provisional administration of independent India (Azad Hind) in Singapore on October 21, 1943. In the Andaman, which the Japanese had previously occupied, Netaji raised the Indian flag. Three units of the Azad Hind Fauj (INA) took part in the offensive on northeastern India at the beginning of 1944 in an effort to drive the British out of the country. The warriors who had entered India, according to Shah Nawaz Khan, one of the most important Azad Hind Fauj officers, lay flat on the ground and fervently worshipped the precious soil of their motherland. However, Azad Hind Fauj’s attempt to liberate India was unsuccessful.

The Japanese government was not seen as a friend of India by the Indian nationalist movement. It felt sympathy for the citizens of those nations that had suffered because of Japan’s invasion. But according to Netaji, British control over India might be overthrown with the cooperation of the Japanese-backed Azad Hind Fauj and an uprising within the country. Indians both inside and outside of the nation found inspiration in the Azad Hind Fauj, which was known for its “Delhi Chalo” slogan and salutation. For the sake of India’s freedom, Netaji joined forces with Indians from all regions and denominations who were residing in Southeast Asia.

Indian women made significant contributions to the fight for India’s independence. The Azad Hind Fauj organized a women’s unit, which Captain Lakshmi Swaminathan oversaw. The regiment’s name was Rani Jhansi. The Azad Hind Fauj came to represent unity and bravery among Indians. A few days after Japan’s surrender, Netaji, one of the most influential figures in India’s battle for independence, was declared dead in an aviation crash.

Fascist Germany and Italy were defeated in 1945, bringing an end to the Second World War. In the war, millions of people died. The United States of America launched atomic bombs on the two cities of Japan, Hiroshima, and Nagasaki when the war was drawing to a close and Italy and Germany had already been vanquished. These cities were completely destroyed and approximately 200,000 people were dead in a matter of seconds. Japan gave up shortly after this. Despite the fact that the use of atomic weapons ended the war, it also caused new global tensions and a new race to develop increasing weapons that may take out all of humanity.

Subhash Chandra Bose Jayanti is celebrated on 23rd January every year as a mark of remembrance for his contribution to nation-building. He was born on this day in Cuttack, Odisha. Officially this day is called ‘Parakram Diwas’ to celebrate and imbibe the quality of courage and valour that Subhash Chandra Bose demonstrated throughout his life. It was on this that last year that a towering statue of Netaji was unveiled by the Prime Minister of India at Kartavya Path. Children in schools, teachers, government officials, and politicians cutting across the party lines pay homage to Netaji on this day.

There isn’t a lot of information available, despite the widespread belief that he survived the plane disaster.

Why Subhash Chandra Bose is famous?

Subhash Chandra Bose, commonly known as Netaji, is renowned for his contribution to the campaign for Indian independence. He was a leader of the Indian National Congress and a member of the noncooperation movement. He belonged to the more militant wing and was well-known for his support of socialist principles.

How did Subhash Chandra Bose died?

Official versions have maintained that Netaji died in an aircraft crash on August 18, 1945, despite the continued doubts of some of his supporters and researchers.

Early in 1942, German and Indian officials in the Special Bureau for India in Berlin and Indian soldiers of the Indische Legion addressed Bose as Netaji for the first time.

Subhash Chandra Bose was recognized for his ardent patriotism as a student and was greatly affected by Swami Vivekananda's teachings. In 1919, he traveled to England to apply for the Indian Civil Services in order to fulfill his parents' desires.

What is the famous slogan of Netaji Subhash Chandra Bose?

Indian revolutionary Subhash Chandra Bose advocated for using force to overthrow the British. In 1943, he enlisted in the Indian National Army. "Tum mujhe khoon do mai tumhe azadi doonga" was one of his most well-known statements (Give me blood, I shall give you freedom) and Jai Hind' & 'Delhi Chalo'.

What did Subhash Chandra Bose do to India?

He organised the first Indian National Army (INA), Azad Hind Fauj, in 1943, launched an armed uprising, and motivated thousands of Indian youths to participate in the fight for freedom from British colonial control.