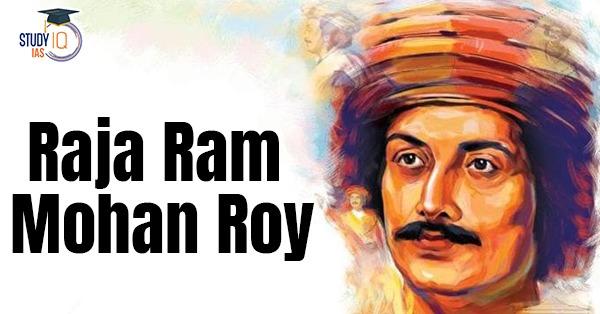 Ram Mohan Roy, also known by the spellings Rammohun, Rammohan, or Ram Mohun, was an Indian religious, social, and educational reformer who challenged traditional Hindu culture and pointed the way (born May 22, 1772, Radhanagar, Bengal, India—died September 27, 1833, Bristol, Gloucestershire, England) or development in Indian society under British administration. He has been referred to as the founder of modern India.

Due to the significant improvements, Raja Ram Mohan Roy brought about to India in the 18th and 19th centuries, he is credited with sparking the modern Indian Renaissance. The most notable of his endeavors was the eradication of the cruel and horrific Sati Pratha. His initiatives also played a crucial role in ending child marriage and the purdah regime. Ram Mohan Roy established the Brahmo Samaj in 1828 to bring together the Calcutta-based Brahmos, a group of people who rejected idol worship and caste limitations. He was given the title “Raja” in 1831 by Akbar II, the Mughal emperor. Roy traveled to England as the Mughal King’s representative to make sure Bentick’s prohibition on the practice of Sati was upheld. While living in Bristol, England, in 1833, he passed away from meningitis.

Ramakanta Roy and Tarini Devi welcomed Raja Ram Mohan Roy into the world on August 14, 1774, at Radhanagar village in the Hooghly district of Bengal Presidency. His father was a well-to-do Brahmin who was very orthodox and adhered to all of his religious obligations. Ram Mohan expressed his desire to become a monk when he was 14 years old, but his mother vehemently opposed the idea, so he abandoned it.

Ram Mohan, who was nine years old at the time, we as a kid following the customs of the day, but his first wife passed away soon after. At the age of ten, he wed again, giving birth to two sons. His third wife, whom he married after the passing of his second wife in 1826, lived longer than he did. 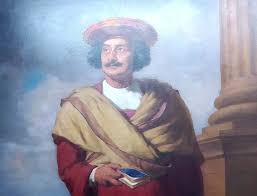 Despite being a highly conservative man, Ramakanto encouraged his son to seek higher education. His schooling in Bengali and Sanskrit was received at the village school. Ram Mohan was then dispatched to Patna to enroll in a Madrasa to study Persian and Arabic. As Persian and Arabic were the court tongues of the Mughal Emperors at the time, they were in high demand. He read other Islamic texts as well as the Quran. He left Patna after completing his schooling to study Sanskrit in Banaras (Kashi). He quickly became fluent in the language and started learning the Vedas and Upanishads, among other scriptures. At the age of 22, he started taking English lessons. He read the writings of philosophers like Euclid and Aristotle, whose works influenced the development of his moral and religious sensibilities.

After finishing his schooling, Rammohan worked as a clerk for the East India Company. Under Mr. John Digby, he was employed by the Rangpur Collectorate. Later on, he was elevated to the position of Dewan, which was reserved for native officers in charge of revenue collection.

The Bengali civilization was oppressed by a variety of bad practices and laws in the late 18th century (sometimes referred to as the Dark Age). Extensive rituals and strict moral codes that were erroneously interpreted and heavily modified ancient traditions were enforced. Practices that harmed women in society, such as child marriage (Gouridaan), polygamy, and Sati, were common. The Sati Pratha was the most savage of these traditions. At their husband’s funeral pyre, widows would self-immolate following with the tradition. Although the women had the option to participate in the ritual in its original form, it progressively changed to become a must, particularly for Brahmin and higher caste families. Young girls were wed for dowry to much older men so that these men might reap the karmic rewards of their spouses’ Sati sacrifice. The majority of the time, the ladies were compelled to submit to such brutality after being coerced or even drugged to do so. 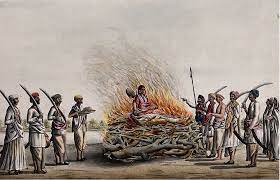 This horrible behavior repulsed Raja Ram Mohan Roy, who spoke out against it. He voiced his opinions openly and addressed the East India Company’s top officials. Through the ranks, his persuasive argumentation and composed perseverance eventually got to Governor General Lord William Bentinck. The Bengal Code Regulation XVII, A.D., also referred to as the Bengal Sati Regulation, was passed in response to a great deal of opposition from the orthodox religious community and thanks to Lord Bentinck’s sympathy with Roy’s intentions and feelings. The law made it illegal to practice Sati Daha in Bengal Province, and anyone found doing so would be prosecuted. Thus, Raja Ram Mohan Roy will always be remembered as a genuine benefactor of women who not only worked to end the Sati tradition but also spoke out against polygamy and child marriage and demanded that women have the same inheritance rights as men. He was a fierce opponent of the severe caste divisions that prevailed at the time.

Sanskrit and Persian were among the classical languages Ram Mohan Roy studied at school. He first encountered English considerably later in life and picked up the language to improve his work opportunities with the British. But being a voracious reader, he consumed English journals and literature, gleaning all the information he could. While ancient literature like the Vedas, Upanishads, and the Qur’an had taught him to value philosophy, he had not received a scientific or rational education. He pushed for the establishment of an English-language educational system that would cover maths, physics, chemistry, and even botany among other science topics. Together with David Hare, he founded Hindu College in 1817, which went on to become one of the top educational institutions in the nation and produced some of India’s brightest minds. This revolutionized the Indian educational system. He founded the Anglo-Vedic School in 1822 and the Vedanta College in 1826 to blend traditional theological principles with contemporary intellectual teachings.

Ram Mohan Roy was adamantly opposed to the excessive ritualism and idolatry that priests promoted. He had examined religious texts from other faiths and argued that Hindu texts like the Upanishads supported the idea of monotheistic. He then set out on his mission to bring the principles of the old Vedic scriptures into modern society in their purest form. In 1928, he established the Atmiya Sabha, and on August 20 of that year, the new religion’s first gathering took place. The Atmiya Sabha changed its name to the Brahma Sabha, a forerunner of the Brahmo Samaj.

The three main tenets of this new movement were monotheism, disassociation from the scriptures, and rejection of the caste system. Brahmo religious rituals were established following Christian or Islamic prayer customs after being completely cleansed of Hindu ceremonialism. With time, the Brahma Samaj developed into a potent force for social change in Bengal, particularly in the area of women’s education.

To ensure that Lord Bentick’s Sati Act would not be overturned, Raja Ram Mohan Roy traveled to England in 1830. He petitioned the Imperial Government to raise the royalty paid to the Mughal Emperor. Raja Ram Mohan Roy passed away from meningitis on September 27, 1833, in Stapleton, Bristol, while he was visiting the United Kingdom. He was laid to rest in Bristol’s Arnos Vale Cemetery. In honor of Raja Ram Mohan Roy, the British government recently named a roadway in Bristol “Raja Rammohan Way.”

Ram Mohan arrived in Calcutta in 1815 and immediately launched an English College with the help of his savings because he saw education as a tool for enacting social reforms. He opposed the government’s decision to solely open Sanskrit schools, and he wanted the pupils to acquire the English language and scientific topics. He asserted that if Indians are denied the opportunity to learn modern topics like mathematics, geography, and Latin, they will fall behind. Ram Mohan’s idea was adopted by the government and put into practice, but not before he passed away. Ram Mohan was also the first to emphasize the importance of mother language development. His Bengali “Gaudiya Byakaran” is his best prose composition. Ram Mohan Roy was followed by Bankim Chandra and Rabindranath Tagore.

Q What was Raja Ram Mohan Roy famous for?

Ans Raja Ram Mohan Roy was a brilliant scholar and an original thinker who founded the Brahmo Samaj, one of the first socio-religious reform groups in India. He is referred to as the “Father of Modern India” or the “Father of the Bengal Renaissance” and was a religious and social reformer.

Ans Ram Mohan Roy had three marriages. He lost his first wife young. With his second wife, who passed away in 1824, he had two sons: Radhaprasad in 1800 and Ramaprasad in 1812. The third wife of Roy outlived him.

Ans The founder of the contemporary Indian Renaissance, Raja Ram Mohan Roy. Roy, who was a fierce advocate for the right to free speech and expression, battled for the rights of the local press.

Ans It is also true that Christianity played a significant role in Roy’s decision to establish the Brahmo Samaj as a monotheistic religion. That he had converted to the Unitarian branch of Christianity seems to be all but evident. His book “The Precepts of Jesus,” which he published, received harsh criticism from Baptist missionaries.

Ans In 1828, Lord William Bentinck was appointed Governor-General of India. To combat various pervasive societal ills like Sati, polygamy, child marriage, and female infanticide, he worked alongside Raja Rammohan Roy. In all of the British Indian territory under the Company’s jurisdiction, Lord Bentinck passed a law outlawing Sati.