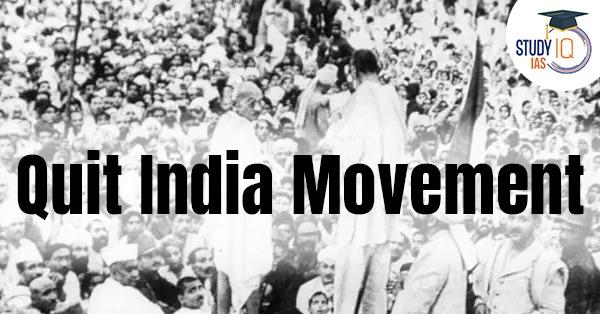 The Quit India Movement started on August 8, 1942, also known as the August Kranti Movement, calling for the end of British rule in India at the All India Congress Committee’s session in Bombay.

At the meeting of the All-India Congress Committee in Mumbai, Mahatma Gandhi demanded the end of British rule and launched the Quit India Movement. In his address at the Gowalia Tank Maidan, now referred to as August Kranti Maidan, Mahatma Gandhi urged listeners to “Do or Die”.

The Indian flag was raised at the Gowalia Tank Maidan in Mumbai during the Quit India Movement by Aruna Asaf Ali, also referred to as the “Grand Old Lady” of the Independence Movement. Yusuf Meherally, a socialist and trade unionist who served as Mayor of Mumbai, is the author of the phrase “Quit India.”

There were many suppressed causes of Quit India Movement. Japan, one of the Axis Powers that fought alongside the British against them in the Second World War, was advancing on the northern and eastern borders of India by 1939. The South-East Asian populations that the British had abandoned were left in a precarious situation. The Indian populace had misgivings about the British government’s ability to protect India against Axis attack, hence this action did not inspire much faith in them. 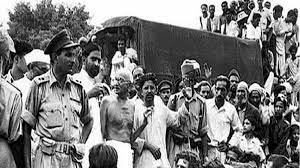 Gandhi also held the opinion that if the British departed India, Japan would lack sufficient justification for an invasion. Apart from learning about British military losses, the war’s hardships, such as skyrocketing costs for necessities, fueled animosity toward the British administration.

The Cripps Mission’s failure to guarantee any sort of constitutional solution for India’s issues also prompted the INC to call for a large-scale civil disobedience movement. The fall of the Cripps Mission was the movement’s prime reason. The mission was established to settle the Indian dispute over a new constitution and self-government under Stafford Cripps. It failed because, in addition to the split, it granted India, not complete freedom but rather Dominion Status.

In response to Gandhi’s appeal, the British administration immediately detained all significant Congress leaders the following day. Everyone from Gandhi to Nehru to Patel was detained. As a result, the Quit India movement was left in the hands of younger leaders like Ram Manohar Lohia and Jayaprakash Narayan. Out of the leadership vacuum, other leaders developed, such as Aruna Asaf Ali. Over 100000 people have been arrested in connection with the quit India movement. To put an end to the violence the authorities used force. They were mass floggings and lathi charges. Even women and children were not spared. In total, about 10,000 persons were killed by police shootings.

There was no communal conflict. An INC ban was imposed. Nearly the whole duration of the war, its commanders were imprisoned. In 1944, Gandhi was released due to health concerns. Gandhi’s plea was heeded by the populace in a big way. However, there were isolated incidents of violence and damage to government property because of a lack of leadership. Electricity lines were cut, communication and transportation networks were disrupted, and numerous buildings were set on fire. Some parties refused to back the movement. Muslim League, Communist Party of India (the government later lifted the party’s ban), and Hindu Mahasabha all voiced disapproval.

The League opposed the British leaving India without first dividing the nation. In reality, Jinnah urged more Muslims to join the military and fight in the conflict. Due to their alliance with the Soviet Union, the Communist party supported the war that the British were waging. By this time, Subhas Chandra Bose was working from abroad to set up the Azad Hind government and the Indian National Army. C. Rajagopalachari left the INC because he didn’t support total independence. The Quit India Movement was not generally supported by the Indian bureaucracy.

All around the nation, there were strikes and protests. Workers supported the movement by refusing to work in the factories, despite the communist group’s lack of support. Parallel governments were also established in several locations. For instance, Ballia, Tamluk, and Satara. The movement’s focal points were Karnataka, Maharashtra, Midnapore, and Uttar Pradesh. The protests continued until 1944.

The government used harsh repression tactics, but the populace was unmoved and kept up their fight. Even though the government claimed that independence could only be granted when the war ended, the movement emphasized that Indians must be involved in governance for it to work. The movement prioritized calling for total independence as the main goal of freedom movement. Public spirit and anti-British feelings were raised.

Underground activities were carried out by figures who eventually became well-known leaders such as Ram Manohar Lohia, J.P. Narayan, Aruna Asaf Ali, Sucheta Kriplani, and Biju Patnaik. Women participated actively in the movement. Usha Mehta, among other female activists, contributed to the establishment of an underground radio station, which sparked awareness of the movement. The Quit India Movement has strengthened the sense of brotherhood and unity among people. Many high school and college kids dropped out, while lots of adults quit their jobs and took money out of the banks.

The costs of World War II led the British to come to the important conclusion that India was unmanageable in the long run, even though the Quit India movement collapsed in 1944 as a result of their insistence that independence could only take place when the war was over and their refusal to grant it immediately. The character of political negotiations with the British was altered, ultimately leading to India’s independence.

The Violence that wasn’t planned happened in certain places during the Quit India movement. The British forcefully put an end to the movement; people were shot, lathi-charged, villages were set on fire, and huge fines were imposed. To suppress the unrest, the authorities used brutality and detained more than 100,000 individuals.

This movement was opposed by many parties and collaborations like the Hindu Mahasabha, the Communist Party of India, and the Muslim League. The movement was also not supported by the Indian bureaucracy. The League opposed the British leaving India without first dividing the nation. Since the British were associated with the Soviet Union, the Communist party supported them. 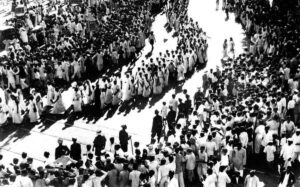 The Hindu Mahasabha publicly rejected the Quit India Movement’s appeal and boycotted it out of concern that it would lead to internal unrest and threaten internal security during the war. Subhas Chandra Bose organized the Azad Hind administration and the Indian National Army while operating from outside. Because they opposed Mahatma Gandhi’s concept, many Congress members, including C Rajagopalachari, resigned from the provincial legislature.

Q What are the main points of the Quit India Movement?

Ans An end to British dominion over India right now. A declaration of free India’s determination to fight off all forms of imperialism and fascism. Formation of India’s interim government following the exit of the British. During a movement of civil disobedience against British rule.

Ans At a meeting of the All-India Congress Committee in Bombay on August 8, 1942, Mohandas Karamchand Gandhi announced the start of the “Quit India” movement. The British government detained Gandhi, Nehru, and many other Indian National Congress leaders the following day.

Ans To get the British to leave India, Mahatma Gandhi started the Quit India movement in 1942. During this agitation, several Indian National Congress (INC) members were detained.

Ans The Quit India Movement, also known as the Bharat Chhodo Andolan, was introduced by Mahatma Gandhi on August 8, 1942.

Q Who is the lady leader of the Quit India Movement?

Ans Aruna Asaf Ali was a publisher, political activist, and educator from India. She was an ardent member of the campaign for Indian independence, and she is well-known for raising the Indian National flag at the Gowalia Tank Maidan in Bombay in 1942, during the Quit India Movement.

Q Who are the hero of the Quit India Movement?

Ans Hero of the Quit India Movement are:

Ans. The British came to the crucial conclusion that India was ungovernable in the long run as a result of the costs of World War II, even though the Quit India campaign was crushed in 1944 as a result of their refusal to grant immediate independence and instead insisting that it could only happen after the war had ended.