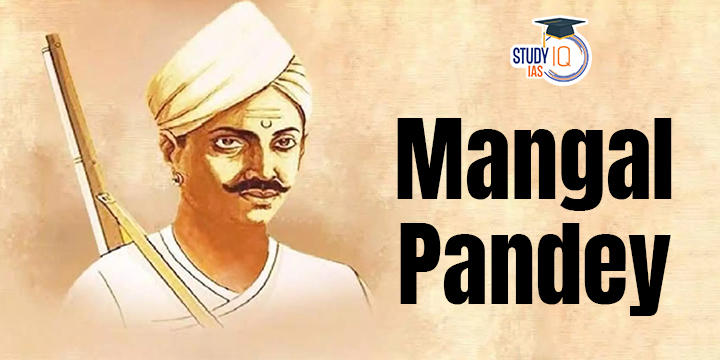 The Indian Rebellion of 1857, also known as the “Sepoy Mutiny,” and “India’s First War of Independence,” was preceded by events in which Mangal Pandey, an Indian soldier, had a significant role. His name has come to be associated with the 1857 uprising. Mangal Pandey, a devoted Brahmin by faith, served as a Sepoy (soldier) in the 34th Bengal Native Infantry (BNI) regiment of the British East India Company.

After hearing rumors that the greased cartridges in the recently launched Enfield gun were lubricated with cow and pig fat, he refused to bite off the ends of them. After being stopped from shooting himself, the enraged man incited his fellow soldiers to rebel against the British officers and attacked them before being overpowered, taken into custody, and court-martialed. In India, he is revered as a hero. In 1984, the Indian government released a postage stamp in his honor. His life has been represented in a number of movies and TV shows.

On July 19, 1827, Mangal Pandey was born in the British Indian province of Ceded and Conquered Provinces (now known as Uttar Pradesh), in the village of Nagwa in the upper Ballia district. His Jayanti, or birth anniversary, is celebrated on the 19th of July. He came from a wealthy, high-caste Brahman family that had fervent Hindu views. He enlisted in the Bengal Army in 1849. It was the army of the Bengal Presidency, one of the three British India presidencies. Some versions claim that Pandey was enlisted by a regiment that passed him. In March 1857, he enlisted as a private soldier in the 5th Company of the British East India Company’s 34th Bengal Native Infantry (B.N.I.) regiment. There were several Brahmins in the regiment.

Mangal Pandey: Beginning and His Attacks

He also learned that one of them, Mangal Pandey, was inciting the soldiers to revolt and threatening to shoot the first European he saw while pacing in front of the regiment’s guardroom close to the parade area while carrying a loaded rifle. According to testimony given during a later inquiry, when Pandey saw a detachment of British soldiers getting off a ship close to the cantonment, he took away his firearms and hurried to the quarter-guard building. Discontentment among the Sepoys and bhang intoxication had disturbed Mangal Pandey.

Role of Mangal Pandey in Revolt of 1857

In the 1850s, the British introduced the Enfield rifle to India, and its filthy cartridges could only be fed into the weapon after being bit off at the ends. There were rumors going around that the cartridges’ lubricant was either pig or cow lard. Hindus hold cows in high regard, but Muslims are not allowed to eat pork, which caused the Indian sepoys to get furious. At that time, Mangal Pandey was assigned to the Barrackpore garrison. Mangal Pandey, a devout Hindu Brahmin by faith, became incensed after learning of the situation and decided to express their displeasure to the British.

It is generally accepted that Pandey attempted to inspire his regiment’s other soldiers to rebel against the British officers and to plot an uprising against British rule. On March 29, 1857, Lieutenant Baugh, the 34th Bengal Native Infantry’s adjutant stationed at Barrackpore, learned that some of his regiment’s sepoys were upset and that Mangal Pandey, a man carrying a loaded musket, was stirring up his fellow soldiers to revolt. The first European Pandey saw, he threatened to shoot. After learning that a detachment of British soldiers had arrived on a ship and were disembarking near to the cantonment, the enraged Pandey reportedly took weapons and went to the quarter-guard house.

General Hearsey, the commanding commander, learned about the event and rode to the site with his two officer sons to calm things down. The general pulled out his revolver and told the sepoys to perform their duties while threatening to shoot anyone who disobeyed him. Now that the sepoys were following his orders, Pandey attempted suicide by pressing the musket’s muzzle to his chest and firing himself while drawing the trigger with his toe. However, this did not prove deadly, as he sensed that he would be arrested.

On the afternoon of March 29, 1857, Mangal Pandey was walking agitatedly in front of the regiment’s guard room. He shouted to his fellow sepoys and seemed thrilled. He threatened to use a loaded rifle to kill the first European he encountered that day. He cried to the other soldiers, “Come out, the Europeans are here, and by biting these cartridges, we shall become infidels.” After learning about Pandey’s conduct, Sergeant-Major James Hewson rushed onto the scene.  Jemadar Ishwari Prasad, an Indian officer, declined to comply with his request to arrest Mangal  Pandey, claiming that he was unable to do it on his own.

The commanding officer, General Hearsey, showed up with two officers in the interim. After failing to rally all the troops to an open mutiny, Mangal Pandey made an attempt to murder himself with his musket. He only wounded himself, though, and as a result, was taken into custody. In less than a week, Mangal Pandey was found guilty and given a hanging death sentence. He claimed throughout his trial that he rebelled against orders of his own free will and that no other soldiers encouraged him. Jemadar Ishwari Prasad was also given the death penalty by hanging since he had instructed the other soldiers not to detain Mangal Pandey.

According to the judgement, Prasad was put to death on April 21, 1857, and Mangal Pandey on April 8, 1857. On May 6th, the entire 34th Regiment of the BNI was disbanded “with disgrace.” After an investigation revealed that the soldiers had failed to subdue a mutinous soldier, this was done. Before the regiment was disbanded, Sepoy Paltu was elevated to Havildar but was assassinated inside the cantonment. Mangal Pandey’s rebellion was one of the major prefaces to the 1857 revolution.

Consequences of Mangal Pandey’s Role in Revolt of 1857

Most historians agree that Pandey’s attack and subsequent punishment marked the beginning of the Indian Rebellion of 1857. He was well-known for his acts among his fellow sepoys, and it is believed that this was one of the factors that set off the larger wave of mutinies that broke out over the following few months. Later members of the Indian Nationalist Movement, such V.D. Savarkar, who viewed Mangal Pandey’s drive as one of the movement’s initial examples, were influenced by him.

Modern Indian nationalists depict Pandey as the mastermind behind a strategy to overthrow the British, even though a recently released study of the events just before the breakout claims that “there is no historical evidence to support any of these revisionist interpretations.” During the insurrection that followed, the term “Pandee” or “Pandey” was coined by British soldiers and civilians to refer to a mutinous sepoy. The name of Mangal Pandey was directly derived from this.

The Indian government honoured him by issuing a postage stamp bearing his likeness on October 5, 1984. At Barrackpore, a park was built to honour the spot where the gallant soldier attacked and rebelled against the British forces. The Shaheed Mangal Pandey Maha Udyan is how it was dubbed. West Bengal’s Barrackpore Cantonment on Surendranath Banerjee Road also has a cenotaph honouring the valiant soldier.

Q What is Mangal Pandey famous for?

Ans. In Indian history, Mangal Pandey is renowned as a freedom fighter who dedicated his life to rid the nation of the British raj. He was instrumental in the 1857 uprising, sometimes referred as as the Sepoy Mutiny. He is well-known in India for being one of the country’s first freedom fighters.

Q Who did Mangal Pandey shot?

Ans. The first pistol fired on an Englishman during the Revolt of 1857 was when Pandey shot at the Sergeant-adjutant Major’s Lieutenant Henry Baugh as he approached on a horse.

Ans. A 2005 Indian historical biographical drama film titled Mangal Pandey: The Rising is based on the life of the soldier Mangal Pandey, who is credited with helping to ignite the Indian uprising of 1857 and is also known internationally as The Rising: Ballad of Mangal Pandey (also known as The First War of Indian Independence).

Ans. One of the earliest instances of army protest occurred in Barrackpur, a town close to Kolkata. The British-designated “Native Sepoys”—Indian soldiers of the East India Company—revolted shortly after in the month of May 1857. They marched to Delhi on March 10 and recognized Moghul King Bahadurshah II as the Emperor.

What is Mangal Pandey famous for?

In Indian history, Mangal Pandey is renowned as a freedom fighter who dedicated his life to rid the nation of the British raj. He was instrumental in the 1857 uprising, sometimes referred as as the Sepoy Mutiny. He is well-known in India for being one of the country's first freedom fighters.

Who did Mangal Pandey shot?

The first pistol fired on an Englishman during the Revolt of 1857 was when Pandey shot at the Sergeant-adjutant Major's Lieutenant Henry Baugh as he approached on a horse.

Is Mangal Pandey a true story?

A 2005 Indian historical biographical drama film titled Mangal Pandey: The Rising is based on the life of the soldier Mangal Pandey, who is credited with helping to ignite the Indian uprising of 1857 and is also known internationally as The Rising: Ballad of Mangal Pandey (also known as The First War of Indian Independence).

One of the earliest instances of army protest occurred in Barrackpur, a town close to Kolkata. The British-designated "Native Sepoys"—Indian soldiers of the East India Company—revolted shortly after in the month of May 1857. They marched to Delhi on March 10 and recognized Moghul King Bahadurshah II as the Emperor.