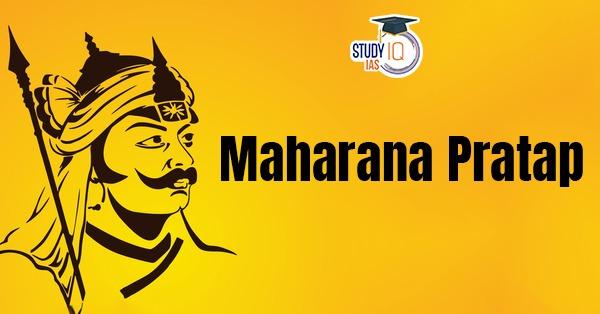 Maharana Pratap History: Pratap Singh I or famously known as Maharana Pratap was the 13th king of Mewar. He was born in the Sisodia clan of Rajputs of Mewar to Udai Singh II and Jaiwanta Bai on 9th May 1540.

He is remembered for the resistance and the great valour that he showed against his Mughal counterpart Akbar. Maharana Pratap earned great distinction for neither forming a political alliance with Mughal Empire nor did he bow down to them like his other Rajput peers.

Recently the Prime Minister of India, Narendra Modi remembered and honoured the valour and bravery of Maharana Pratap on his 482nd birth Jubilee.

Important Events In The Early Life Of Maharana Pratap

Maharana Pratap in Battle Of Haldighati

On 18th June 1576, the mighty force of the Mughal Empire led by Man Singh I clashed with the army of Rana of Mewar, Maharana Pratap.

Background Of Battle Of Haldighati

The Mughal policy of expansion under the rule of Akbar had turned its eyes towards the Rajputana region. Through various tools such as alliance, diplomacy and use of force the Mughal Empire succeeded in the subordination of many Rajputana kingdoms. Though one region of Mewar still stood tall which led to the Siege of Chittorgarh in 1568.

After Maharana Pratap become the ruler of Mewar, there were many diplomatic attempts by Akbar to make Mewar it’s vassal as the Mughals wanted access to Gujarat and the rest of Mewar. This was seen as an economic compulsion for Mughals.

As the mission to sway Mahranapa Pratap failed under Raja Bhagwant Das as well as Raja Todar Mal, war was the only option left.

Details Of Battle Of Haldighati

The folklore has portrayed the battle to be huge in numbers but modern historians provide an estimated figure of 5000-10,000 for the Mughal army comprising elephants and musketeers while putting the Mewari forces at 3000 cavalries with 400 archers from the Bhil tribes from the kingdom of Merpur.

Around 1579 Mughal Army had shifted its focus to rebellions in Bengal and Bihar and Mirza Hakim’s foray into Punjab. Taking advantage of the situation in 1582 Maharana Pratap attacked and took the Mughal post at Dawer, ushering in the automatic fall of all 36 Mughal military outposts in Mewar. On the other hand, Akbar remained in Lahore for 12 years after 1585 focusing on the North-West region allowing Pratap to regain most of the region in Mewar (Kumbalgarh and Udaipur) except its Capital Chittor.

Ans. Maharana pratap died at the age of 56 from injuries sustained in a hunting accident on 19 January 1597.

Ans. Maharana Pratap was not killed but died of injuries sustained in a hunting accident.

Q. When is Maharana Pratap Jayanti?

Ans. As per the Hindu calendar, the birth anniversary of Maharana Pratap falls on 2nd June. However, according to the English calendar, his birthday is celebrated on 9th May.

Maharana pratap died at the age of 56 from injuries sustained in a hunting accident on 19 January 1597.

Maharana Pratap was not killed but died of injuries sustained in a hunting accident.

What was the Height of Maharana Pratap?

Maharana Pratap was one of the strongest warriors in the country, with a height of 7 feet 5 inches.

When is Maharana Pratap Jayanti?

As per the Hindu calendar, the birth anniversary of Maharana Pratap falls on 2nd June. However, according to the English calendar, his birthday is celebrated on 9th May.