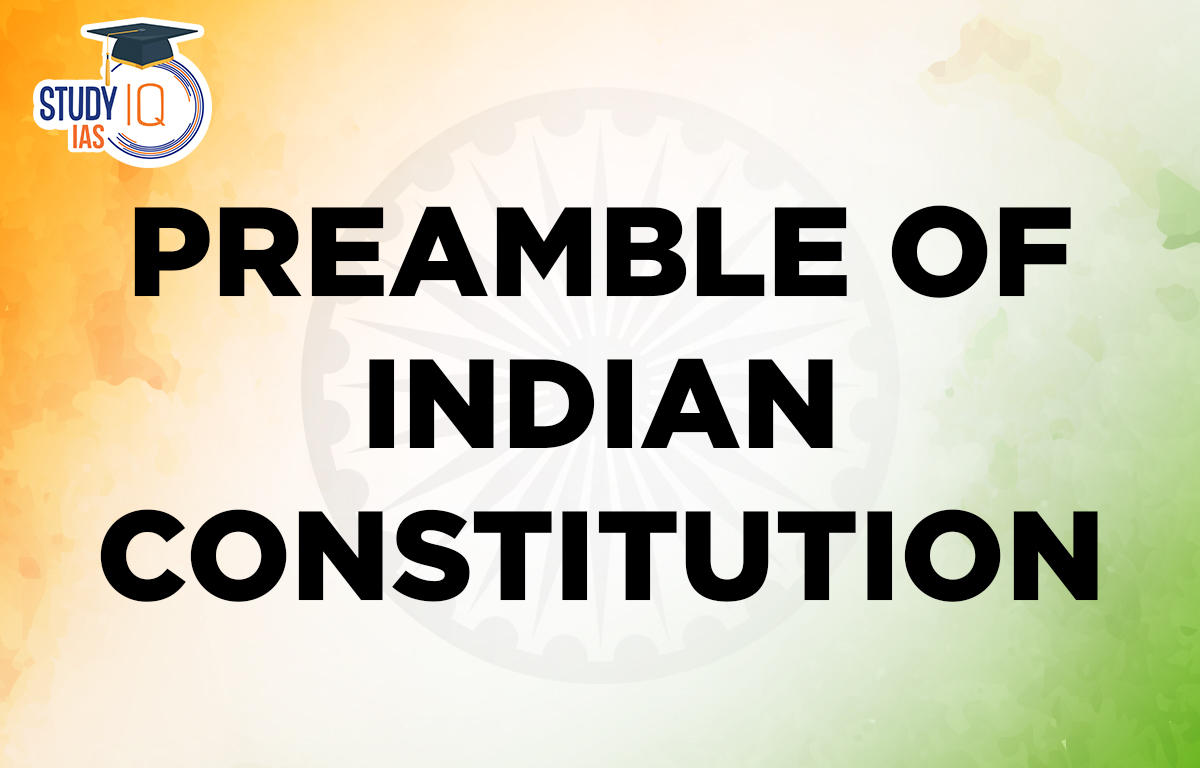 The Constitution of India’s “Preamble” is a succinct introductory statement that outlines the document’s overarching goals and guiding principles. It also identifies the source of the document’s authority, i.e., the people. The Indian Constituent Assembly approved it on November 26, 1949, and it went into effect on January 26, 1950.

The Preamble of Indian Constitution is a succinct introduction that outlines the fundamental goals, tenets, and guiding principles of the document. The preamble provides information about the following:

Jawaharlal Nehru’s Objectives Resolution, which the Constituent Assembly ratified on January 22, 1947, established the principles that serve as the foundation of India’s Constitution.

The Preamble outlines the Constitution’s goals even though it is not legally binding and can be used to help understand the Articles where there is a linguistic ambiguity.

The Indian people are the Constitution’s ultimate source of authority, as stated in the Preamble. In the preamble, India is described as a sovereign, socialist, secular, and democratic republic.

The Preamble seeks to provide justice, liberty, equality, and fraternity for all citizens in order to safeguard the nation’s integrity and togetherness. As stated in the preamble, it was adopted on November 26, 1949.

The Supreme Court has debated the preamble’s inclusion in the Constitution on numerous occasions. Reading the following two cases will help you understand it.

It was used as a reference under Article 143(1) of the Constitution, which dealt with the Berubari Union’s implementation under the Indo-Pakistan Agreement, and in exchanging the enclaves that the panel of eight judges agreed to take into consideration.

The Preamble is the key to unlock the minds of the framers, the Court said in the Berubari case, but it cannot be regarded as a part of the Constitution. So it cannot be enforced in a court of law.

In this instance, a bench of 13 judges was gathered for the first time to hear a writ petition. The Court determined that:

The Supreme Court has once again ruled that while the Preamble is an essential component of the Constitution, it is not immediately enforceable in an Indian court of justice. This ruling was made in the 1995 case of Union Government vs. LIC of India.

After the Kesavanand Bharati case verdict, it was acknowledged that the preamble is a component of the Constitution and enacted the 42nd Amendment Act in 1976. Preamble can be changed because it is a part of the Constitution under Article 368, but its fundamental format cannot be changed. Currently, the 42nd Amendment Act of 1976 is the only amendment to the preamble.

Q What are 5 parts of Preamble?

Ans. The following are the five major ideals enshrined in the Preamble to the Constitution of India:

Q Who wrote preamble of India?

Q Why is preamble important?

Ans. It outlines aspirations that the Constitution aspires to. It provides the Constitution with direction and meaning. It also enshrines the broad objectives and socioeconomic targets that must be attained through constitutional processes.

Q What is Preamble Explain?

Ans. A prologue is a statement that introduces a document and discusses its goals and philosophy. A Constitution outlines the goals of its creators, the background to their work, and the fundamental ideals and values of the country. Jawaharlal Nehru’s Objectives Resolution, which the Constituent Assembly approved on January 22, 1947, set forth the principles that are reflected in the Preamble to India’s Constitution. Although not legally binding, the Preamble outlines the goals of the Constitution and serves as a guide for interpreting unclear wording in the Articles.

Q What is the features of preamble?

Ans. The Preamble’s characteristics include stating the authority from which the Constitution draws its authority, reaffirming the nation’s commitment to securing justice, liberty, and equality, outlining the Constitution’s goals, and mentioning the area that the Constitution shall apply to.