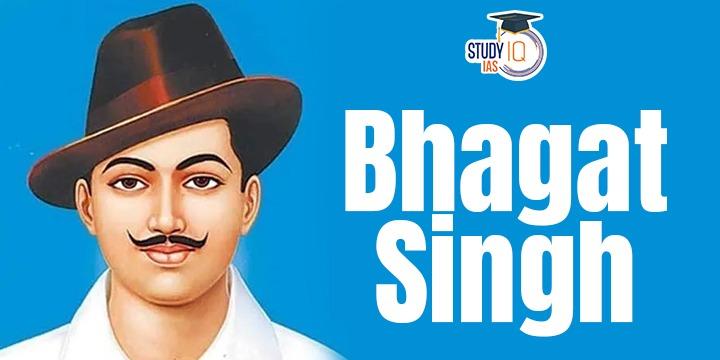 One of the most important revolutionaries in the Indian Nationalist Movement is Bhagat Singh. On September 28, 1907, Kishan Singh and Vidyavati gave birth to Bhagat Singh in Banga, Lyallpur District (now Pakistan). When he was born, his uncles Ajit and Swaran Singh, as well as his father Kishan Singh, were all imprisoned for protesting the 1906 Colonization Bill. Being raised in a politically conscious household where his family supported the Ghadar party, young Bhagat Singh developed a sense of patriotism.

Bhagat Singh started supporting Mahatma Gandhi’s Non-Cooperation Movement at a very young age. Bhagat Singh openly resisted the British and carried out Gandhi’s request by setting fire to publications that were sponsored by the government. In fact, he quit school altogether to enrol in Lahore’s National College. The 1919 Jallianwala Bagh Massacre and the 1921 murder of unarmed Akali demonstrators at the Nankana Sahib both occurred when he was a teenager, and both events strongly influenced his patriotic viewpoint.

Bhagat Singh’s family adhered to the Gandhian philosophy of using non-violence to achieve Swaraj, and for a while, he also backed the Indian National Congress and the objectives of the Non-Cooperation Movement. After the Chauri Chaura Incident, Gandhi demanded that the movement against non-cooperation be abandoned. Bhagat Singh disassociated himself from Gandhi’s nonviolent effort because of the choice and joined the Young Revolutionary Movement instead. Thus began his career as the most well-known proponent of a bloody uprising against the British Raj.

The Naujawan Bharat Sabha was established in March 1925, with Bhagat Singh serving as its secretary, and was motivated by nationalist movements in Europe. In addition, Bhagat Singh joined the radical Hindustan Republican Association (HRA), which he eventually renamed the Hindustan Socialist Republican Association (HSRA) with fellow revolutionaries Chandrashekhar Azad and Sukhdev.

Bhagat Singh’s early actions consisted primarily of penning critical articles against the British government and printing and distributing leaflets explaining the fundamentals of a violent insurrection with the goal of overthrowing the government. To protest the Simon Commission’s arrival, Lala Lajpat Rai led an all-parties parade that marched toward the Lahore train station on October 30, 1928.

To stop the protesters from moving forward, the police used a violent lathi charge. The revolutionaries were not able to recognize J.P. Saunders who was Assistant Superintendent of Police, they thought that he was a Scott and killed him instead.  Bhagat Singh quickly left Lahore in order to avoid getting caught. To avoid being recognized, he shaved his beard and cut his hair, violating the core values of Sikhism.

Bhagat Singh and Batukeshwar Dutt exploded a bomb in Delhi’s Central Assembly on April 8, 1929, from the Visitors’ Gallery. They also raised pro-revolutionary banners and threw leaflets. Because they planned to utilize the trial as a platform to propagate their message of revolution and anti-imperialism, neither revolutionary resisted being taken into custody. Throughout the entire arrest, they screamed “Inquilab Zindabad” slogans. The phrase gained a lot of traction with young people and many liberation warriors.

They never intended to hurt anyone physically, thus there were no casualties in the incident. Their claimed objective was “to make the deaf hear.” . Auguste Valliant, a French anarchist who was hanged by France for a similar incident in Paris, served as inspiration for Bhagat Singh, the incident’s mastermind. Both Singh and Dutt received life sentences in jail after being found guilty in the incident’s trial. At this point, Bhagat Singh had also been connected to the JP Saunders murder case. He was charged with the murder of Saunders together with Rajguru and Sukhdev.

The violent protest was met with harsh criticism from the political body. In response, Singh said, “Force, when used violently, is ‘violence’ and is, thus, morally indefensible, but when it is used in support of a righteous cause, it has its moral legitimacy. Trial proceedings began in May, with Singh attempting to represent himself and Batukeshwar Dutt being represented by Afsar Ali. The explosions’ malevolent and illegal motive was cited by the court in its decision in favour of a life sentence.

Three people, Hans Raj Vohra, Jai Gopal, and Phanindra Nath Ghosh, turned government approvers, which resulted in a total of 21 arrests, including those of Sukhdev, Jatindra Nath Das, and Rajguru. The police raided the HSRA bomb factories in Lahore shortly after the sentencing and detained several well-known revolutionaries. For the murder of Assistant Superintendent Saunders, the making of bombs, and the Lahore Conspiracy case, Bhagat Singh was detained once again.

Bhagat Singh’s sense of patriotism had been embedded in him since a very young age. He was raised to value nationalism and yearns for an independent India free from British rule. He developed a socialist outlook after reading a lot of European literature and developing a great desire for a democratic future for his beloved nation. Bhagat Singh was born a Sikh, but after seeing numerous Hindu-Muslim riots and other religious upheavals, he began to lean toward atheism.

Bhagat Singh thought that in order to attain something as precious as Independence, imperialism’s exploitative aspect needed to be completely eradicated. According to his opinion, only an armed revolution along the lines of the Bolshevik Revolution in Russia could bring about such transformation. He coined the phrase “Inquilab Zindabad,” which eventually became the war cry of the campaign for Indian independence.

On March 23, 1931, at 7:30 in the morning, Bhagat Singh and his friends Rajguru and Sukhdev were hanged at the Lahore Jail. They allegedly shouted their favourite slogans, such as “Inquilab Zindabad” and “Down with British Imperialism,” as they marched joyfully to the execution location. On the bank of  Sutlej River.

Bhagat Singh was the perfect role model for the youth of his period because of his passionate patriotism and developed idealism. He became the voice of his generation through his criticism of the British Imperial Government in writing and speech. Numerous people have questioned his dramatic departure from Gandhi’s non-violent path to Swaraj, yet with his daring embrace of martyrdom, he encouraged hundreds of teenagers and young adults to fully engage in the freedom movement. Bhagat Singh won the title of Greatest Indian in a 2008 India Today poll, beating out Subhash Chandra Bose and Mahatma Gandhi, demonstrating his standing in modern society.

Q Why Bhagat Singh is famous?

Ans. Bhagat Singh was an Indian revolutionary freedom fighter who was hanged to death by British colonisers at the age of 23 years. Fondly known as ‘Shaheed (martyr) Bhagat Singh’, he is considered a national hero of India’s freedom struggle against colonial rule.

Ans. His real name was Bhagat Singh but he was also known as Shaheed-e-Azam.

Q Why did Gandhi not save Bhagat?

Q Who is the last freedom fighters of India?

Q Who was better Gandhi or Bhagat Singh?

Ans. Bhagat Singh engaged in a revolutionary armed fight laced with violence against the British government, while Mahatma Gandhi led a civil disobedience movement based on the values of nonviolence and satyagraha. Despite having different philosophies and worldviews, each has the same goal.

Ans. One of Bhagat Singh’s most famous slogans is “Inquilab Zindabad.”