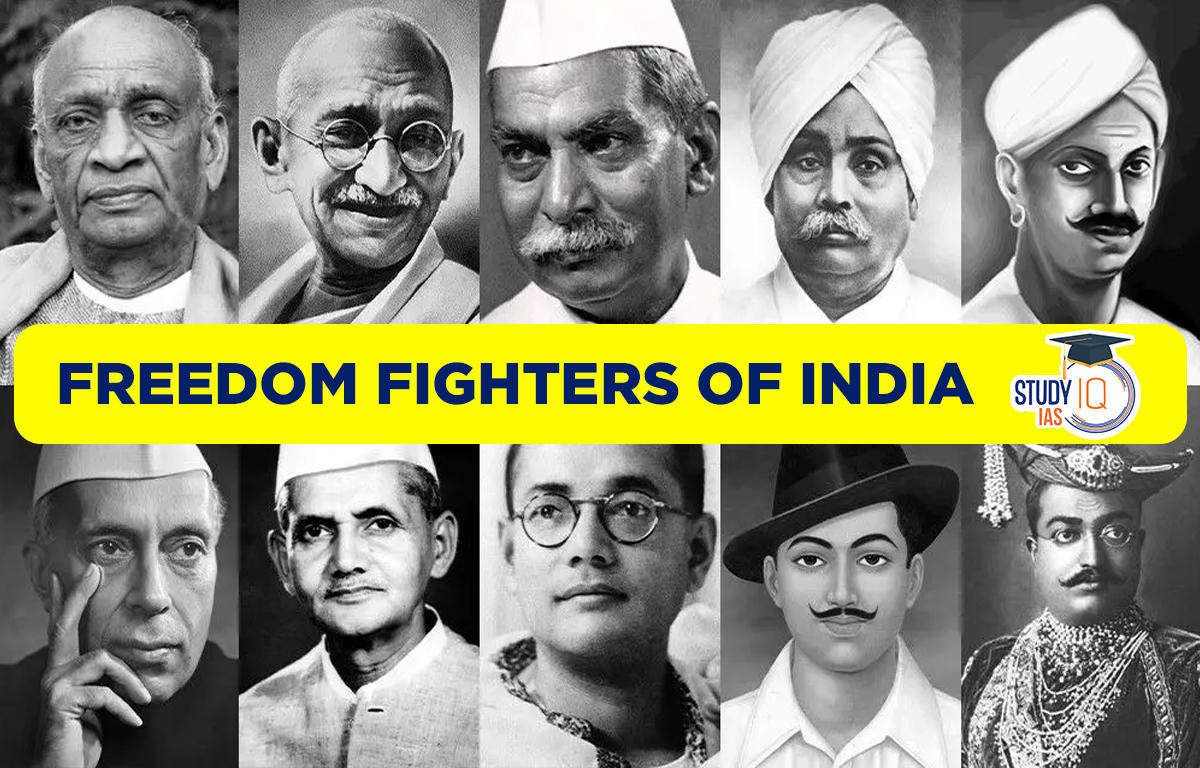 The true heroes of India are the freedom fighters. The freedom we possess was not always possible. Behind this liberation is the battle of our freedom fighters, who sacrificed their own lives for India, their motherland, without regard for their own safety. Behind the 15th of August, 1947, Independence Day celebration, there is a violent and chaotic history of horrible uprisings, battles, and movements led by tens of thousands of brave and patriotic Indian independence fighters who fought alongside the British for India’s independence. To free India from British rule, every one of India’s freedom warriors fought, toiled, and frequently gave their lives. To end the rule of foreign imperialists and their Colonialism in India, a sizable group of revolutionaries and activists from various racial and ethnic backgrounds got together.

Here’s the complete list of Freedom Fighters of India from 1857-1947 with their contributions:

The immense sacrifices that Mohandas Karamchand Gandhi made for India earned him the title of “Father of the Nation”; he was born on October 2, 1869. Along with inspiring numerous other independence movements and human rights movements around the world, he not only helped lead India to independence but also played a significant role in its victory. India is recognized for embracing the concept of nonviolence thanks to Gandhi, popularly known as Bapu. He thought that nonviolent resistance and an unwillingness to cooperate with the British would be enough to bring about independence.

One of the most successful Indian nationalists in history was Subhash Chandra Bose. He was created in Cuttack on January 23, 1897. He was widely referred to as Netaji. He was a fervent nationalist, and his unwavering patriotism made him a hero. Bose belonged to the radical faction of the Indian independence movement. He served as the head of a radical young wing of Congress from the beginning of the 1920s to the end of 1930. He is believed to have died in an aviation accident on August 18, 1945, although the cause of his passing is still unknown.

On September 28, 1907, in Banga, Pakistan, Bhagat Singh was born. He was among the most extreme Indian liberation fighters. In the freedom struggle for India, he was a divisive but respected figure. His involvement in a plot to assassinate James Scott, a British police superintendent, in 1928 as vengeance for Lala Lajpat Rai’s demise was revealed. On March 23, 1931, the British executed this heroic Indian freedom fighter by hanging him at Lahore Central Jail in Lahore, Pakistan. He was only 23 years old at the time. He is well known by the name Shaheed Bhagat Singh.

Mangal Pandey, a well-known Indian freedom fighter who was born on July 19th, 1827, is frequently seen as the forerunner of India’s first war for independence, the 1857 uprising against the British. As a soldier in the 34th Bengal Native Infantry regiment of the East India Company’s army, he led the Sepoy rebellion that ultimately resulted in the 1857 uprising. In anticipation of a Sepoy uprising, British officers killed him on April 8, 1857, at Barrackpore, ten days early.

On November 19, 1828, the Queen of Jhansi Rani Laxmibai was born in Varanasi. She goes by the stage name Manu and goes by the name Manikarnika Tambe. She was one of the most tenacious soldiers in the Revolutionary War. She inspired numerous Indian women to fight for their country’s freedom, and she still inspires women to defend their rights today. She defended her fortress with her infant child when British troops invaded it in 1858. On June 18, 1858, in Gwalior, she perished in the Battle against a Huge Rose.

He joined the 1916 Annie Besant-led Home Rule League movement. He was detained multiple times during the struggle for freedom, and between 1921 and 1945 he spent a total of 9 years behind bars. He was an active member of the United Province’s Non-Cooperation movement and served as its leader. He participated in the salt satyagraha as well. While the Indian National Congress desired dominion status, Jawaharlal Nehru and Subash Chandra Bose believed that the Indian National Congress’s ultimate goal should be complete independence, or Poorna Swaraj. On August 15, 1947, he took office as India’s first prime minister.

The Punjab Kesari, Lala Lajpat Rai, joined the Indian National Congress. He was one of the founding members of the 1894-founded Punjab National Bank. He established the Dayanand Anglo-Vedic School in Lahore in 1885. The Indian Home Rule League of America was established by him in New York in 1917. He established the Servants of People Society in Lahore in 1921 with the goal of recruiting and educating native missionaries to serve their country. He participated in demonstrations against the Jallianwala Bagh Massacre, the Rowlatt Act, and the partition of Bengal.

Jyotiba Phule founded India’s first girls’ school in August 1848, and it was located in Tatyasaheb Bhide’s home. Later, he opened two additional schools for girls and people from lower castes (Mahars and Mangs). He was an early supporter of women’s education in India because he thought that only education could alleviate social injustices. He founded the Satyashodhak Sama (Society of Truth-Seekers) in 1873 with the intention of enhancing the social rights and political access of the less fortunate segments of society.

Together with Indians and retired British officers in London, he established the East India Association in 1866. The organisation advocated for Indians under British rule and brought up issues for consideration. Dadabhai Naoroji’s book, Poverty and Un-British rule in India, which exposed the economic exploitation of India by the British, were his most significant contribution. He opposed the 1878 Vernacular Press Act. He supported the inclusion of Indians in the House of Commons and the Indianization of bureaucracy.

Who is the top 10 freedom fighters?

What are the 5 freedom fighters of India?

Who Is biggest freedom fighter?

What is 10 names of Female Freedom Fighters?

Who is 1 freedom fighter?

A well-known Indian freedom warrior named Mangal Pandey is frequently credited with inspiring the 1857 uprising against the British, widely regarded as India’s first war for independence.

Freedom Fighters of India and the Revolt of 1857