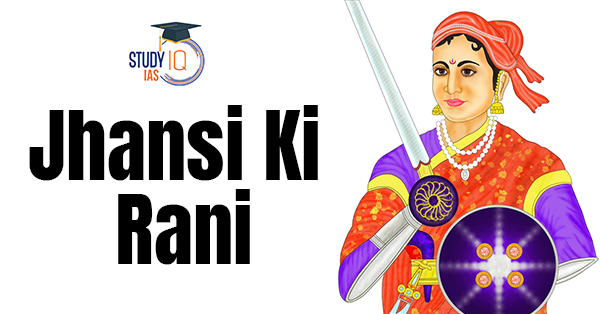 Jhansi ki Rani, also known as Rani Lakshmibai, was a brave ruler of the princely kingdom of Jhansi (presently located in the Jhansi district in Uttar Pradesh). She was a legendary character who was involved in the early Indian Rebellion of 1857 and is linked to early resistance to the British Raj. After her husband, the Maharaja of Jhansi Raja Gangadhar Rao Newalkar, passed away, Lord Dalhousie, the British governor-general of India, refused to recognize the Maharaja’s adopted son as his heir and seized Jhansi in accordance with their “doctrine of lapse” policy.

In 1857, Lakshmibai assembled her soldiers, rebelled against the British, and joined the Indian Rebellion. When the British army overpowered her, she managed to flee, join forces with Tantia Tope, take control of Gwalior, and declare Nana Sahib to be the peshwa (ruler). She persisted in her fight but lost her life in Kotah ki Serai, close to Gwalior, after a tough encounter with the British.

In a Marathi Brahmin family, Rani Lakshmibai was born Manikarnika Tambe on November 19, 1828, in Varanasi, India, to Moropant Tambe and Bhagirathi Sapre (Bhagirathi Bai). She went by the name Manu. She lost her mother when she was four years old. Lakshmibai was adored by her father, a court Peshwa of Bithoor, who called her a “Chhabili,” which means “playful,” and raised her as his own daughter.

Compared to most girls of her era, Lakshmibai had a somewhat unusual childhood. She obtained her schooling at home, including martial arts, sword fighting, horseback, shooting, and fencing while growing up in the Peshwa family with boys. Along with her childhood pals Nana Sahib and Tantia Tope, she also studied mallakhamba.

Manikarnika married the Maharaja of Jhansi, Gangadhar Rao Newalkar, in May 1842. After the famous Hindu goddess Lakshmi, she was given the name Lakshmibai (or Laxmibai) afterwards. Her son Damodar Rao, who was born in 1851 and died prematurely after four months, was born. The Maharaja, who was without an heir, adopted his cousin’s kid. The youngster, who had previously gone by the name Anand Rao, was given the new name Damodar Rao the day before the Maharaja passed away. In addition to giving the British political officer a letter with instructions to treat the child with respect, the Maharaja also executed the adoption procedure with him present.

The Maharaja passed away in November 1853, and the British East India Company, led by Governor-General Lord Dalhousie, refused to recognize the Maharaja’s adopted son as his heir, annexing the state of Jhansi in accordance with the “Doctrine of Lapse.” Lakshmibai, who was popularly known to the British as “the Rani of Jhansi,” was furious about the turn of events. She made up her mind not to give the British control over Jhansi. In March 1854, the British gave Lakshmibai a directive to vacate the palace and fort of Jhansi and appointed her to a monthly stipend of Rs. 60,000.

The Indian Rebellion of 1857, which is regarded as the first significant opposition against British rule, presented a danger to British power in India for the first time. On May 10, 1857, a sepoy mutiny against the British East India Company broke out in Meerut, a garrison town.

Lakshmibai had not yet rebelled against the British and had actually asked Captain Alexander Skene, a British political officer, for permission to assemble a force of armed men for her security, which she was granted. In a number of north Indian cities, the flame of insurrection was quickly spreading. Landlords and owners of princely estates who were unhappy started to rise up in rebellion against the British army.

Although the British had promised to send soldiers to Jhansi, the troops took a while to show up. When the British troops eventually arrived in Jhansi in March 1858, they were surprised by the level of defense the city had put in place due to a segment of Lakshmibai’s advisors who wished to liberate Jhansi from British authority. Heavy weapons that could fire across the entire town were installed in the fort. The Central Indian Field Force commander, Sir Hugh Rose, warned that the city would be destroyed if it did not submit. Lakshmibai declared that they would struggle for independence until they died at this point. On March 23, 1858, when Rose besieged Jhansi, she engaged in combat with the British troops to protect the city. In addition to putting up a strong fight against the British troops, she asked Tantia Tope for assistance and obtained it.

Lakshmibai refused to give up despite the British overwhelming her forces. The valiant Rani jumped from the fort on her horse, Badal, with Damodar Rao on her back and managed to escape in the night escorted with her guards. Dee Lala Bhau Bakshi, Moti Bai, Deewan Raghunath Singh, and Khuda Bakhsh Basharat Ali (commandant), among others, were among the warriors who managed to flee with her.

After leaving the fort, she moved toward the east and camped at Kalpi, where she was joined by other rebels, including Tantia Tope. They were able to take control of Kalpi, but on May 22, 1858, British troops invaded the town. Lakshmibai led the Indian army in combat with the British, but she was unsuccessful. After escaping to Gwalior and joining the other Indian soldiers, Lakshmibai joined the Nawab of Banda, Rao Sahib, and Tantia Tope. They led a successful assault on the city-fortress of Gwalior and managed to take control of its armory and treasury without engaging in any actual fighting. The Peshwa (ruler) was thereafter declared to be Nana Sahib, and the governor to be Rao Sahib (subedar). However, Lakshmibai anticipated a British assault in Gwalior but was unable to persuade the other Indian chiefs to plan a defense. After taking Morar on June 16 of that year, the British soldiers led by Rose successfully attacked Gwalior, confirming Lakshmibai’s prediction.

On June 17, 1858, Lakshmibai commanded a violent engagement with a squadron of the 8th (King’s Royal Irish) Hussars under Captain Heneage in Kotah-ki-Serai, close to the Phool Bagh of Gwalior. Some sources claim that Lakshmibai, who was dressed in a sawar’s uniform, died when a soldier “dispatched the young lady with his carbine,” while other sources claim that the Rani, who was dressed in a cavalry leader’s attire, engaged in a fierce battle and, after becoming seriously injured, asked a hermit to burn her body in order to prevent the British from capturing it. Several residents of the area cremated her body after she passed away. Rose claimed that Lakshmibai’s remains were buried “with much ceremony” beneath a tamarind tree at the foot of the Rock of Gwalior.

When the Maharaja passed away, Lord Dalhousie (born on April 22, 1812) attempted to invade Jhansi using the Doctrine of Lapse because the sovereign lacked a natural heir.

In accordance with this, the Rani was given a yearly annuity and instructed to leave the Jhansi fort.

Meerut had experienced the Revolt of 1857, and the Rani was in charge of Jhansi as her little son’s guardian.

In order to take control of the fort, British troops led by Sir Hugh Rose came there in 1858. He threatened to destroy the city if it didn’t submit to him.

Rani Laxmibai refused and proclaimed, “We fight for independence.” In the words of Lord Krishna, we will reap the benefits of victory if we triumph, but if we lose and perish in combat, we shall undoubtedly

The Rani led her army of men and women bravely against the British for two weeks during the fight. Jhansi fought valiantly, but they were defeated.

The Rani escaped to Kalpi on horseback while carrying her young boy on her back.

She then went to Morar, Gwalior, to fight the British.

On June 18, 1858, at the age of 23, Rani Laxmibai perished in battle in Gwalior. When she died, she was wearing a soldier’s uniform.

Generations of people have been inspired by the brave queen’s efforts. Several institutions have been named in her honour, including the Rani Lakshmi Bai Central Agricultural University in Jhansi, the Maharani Laxmi Bai Medical College in Jhansi, the Lakshmibai National University of Physical Education in Gwalior, and the Rani of Jhansi Regiment, a women’s unit of the Indian National Army.

Ans. The Indian Mutiny of 1857–1858 is renowned for Lakshmi Bai’s bravery. Bai provided fierce opposition to the occupying soldiers during a siege of the Jhansi fort and refused to give up even after her warriors were outnumbered. After successfully attacking Gwalior, she was subsequently killed in battle.

Ans. After several battles, Lakshmibai was finally killed at Kotah-ki-Serai on June 17 when an 8th Hussars warrior shot her from her horse.

Q Was Laxmibai a freedom fighter?

Ans. Near Gwalior in 1858, in a location known as Kotah-ki-Serai, Rani Lakshmibai, commonly known as the Rani of Jhansi, lost her life in battle against the British colonial authorities. She was among the first Indian women to fight for freedom and overthrow the British in 1857.

Ans. The “Jhansi ki Rani’s” son, Damodar Rao, passed away just four months after his birth. After the infant passed away, her husband adopted a cousin’s child named Anand Rao, who was later given the new name Damodar Rao the day before Maharaja’s demise.

Ans. General Hugh Rose arrived in Jhansi in 1858, ordered that it submit, and then attacked the city before seizing the fort. The British forces defeated an army led by Tantia Tope that was attempting to free Jhansi.

Why was Rani Laxmi Bai famous?

The Indian Mutiny of 1857–1858 is renowned for Lakshmi Bai's bravery. Bai provided fierce opposition to the occupying soldiers during a siege of the Jhansi fort and refused to give up even after her warriors were outnumbered. After successfully attacking Gwalior, she was subsequently killed in battle.

After several battles, Lakshmibai was finally killed at Kotah-ki-Serai on June 17 when an 8th Hussars warrior shot her from her horse.

Was Laxmibai a freedom fighter?

Near Gwalior in 1858, in a location known as Kotah-ki-Serai, Rani Lakshmibai, commonly known as the Rani of Jhansi, lost her life in battle against the British colonial authorities. She was among the first Indian women to fight for freedom and overthrow the British in 1857.

The "Jhansi ki Rani's" son, Damodar Rao, passed away just four months after his birth. After the infant passed away, her husband adopted a cousin's child named Anand Rao, who was later given the new name Damodar Rao the day before Maharaja's demise.

General Hugh Rose arrived in Jhansi in 1858, ordered that it submit, and then attacked the city before seizing the fort. The British forces defeated an army led by Tantia Tope that was attempting to free Jhansi.