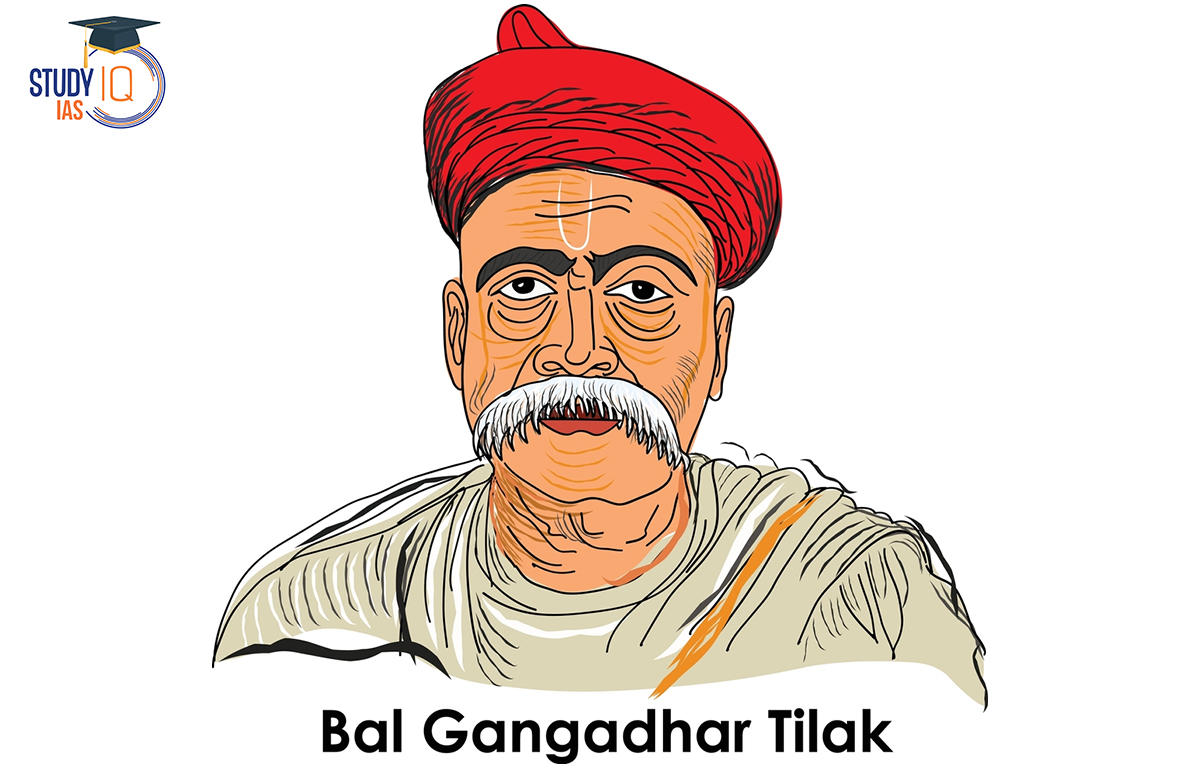 The name “Lokmanya,” which means  to “recognized as a leader by the people,” was also given to him. Mahatma Gandhi dubbed him “The Maker of Modern India.” Bal Gangadhar Tilak was a prominent radical in Indian society and one of Swaraj’s earliest and most ardent supporters. Read all about Bal Gangadhar Tilak in this article for UPSC Preparation.

He earned an honours Bachelor of Arts in Mathematics from Pune’s Deccan College in 1877. In the midst of the semester, he left his M.A. programme to enrol in the LL.B programme. He received his LL.B from Government Law College in 1879.

In the year 1890, Bal Gangadhar Tilak became a member of the Indian National Congress(INC). He quickly began expressing his vehement opposition to the party’s moderate ideas on self-rule. The British, he claimed, could not be defeated by basic constitutional agitation. As a result, he decided to challenge popular Congressman Gopal Krishna Gokhale.

He desired an armed uprising to drive the British out. Bal Gangadhar Tilak enthusiastically backed the Swadeshi (Indigenous) movement and the boycott of British products after Lord Curzon divided Bengal. However, his strategies sparked savage disagreements both within the Indian National Congress (INC) and the movement itself.

Tilak and his supporters were viewed as the extreme wing of the Indian National Congress Party as a result of this basic philosophical disagreement. Lala Lajpat Rai of Punjab and Bipin Chandra Pal of Bengal both backed Tilak’s nationalist endeavours. The Lal-Bal-Pal was the name given to the trio as a whole. The moderate and radical Indian National Congress Party factions engaged in bitter conflict during the party’s 1907 national session. As a result, Congress got divided into two parts.

Bal Gangadhar Tilak battled for Indian freedom from British domination throughout his lengthy political career. Prior to Gandhi, he was the most well-known politician in India. He started a large-scale campaign for independence by focusing on religious and cultural revitalization. Tilak was a social conservative as well as a radical nationalist.

Tilak claimed that the campaigns for swadeshi and boycott were two sides of the same coin. Tilak disagreed with Gopal Krishna Gokhale’s moderate viewpoints and was supported by other Indian nationalists in Bengal and Punjab, including Bipin Chandra Pal.

In 1915, as the political climate in India was rapidly shifting under the shadow of World War I, Bal Gangadhar Tilak came home. Following the liberation of Bal Gangadhar Tilak, there was unheard-of joy. After that, he went back to politics with a more mature attitude. Bal Gangadhar Tilak, Joseph Baptista, Annie Besant, and Muhammad Ali Jinnah established the All India Home Rule League in 1916 after deciding to reunite with his fellow nationalists. The league had 1400 members by April 1916, and by 1917, there were 32,000.

Bal Gangadhar Tilak, after completing his studies, decided to devote himself to the greater cause of national awakening rather than accepting the lucrative offers of government service. He was a remarkable reformer who spent his entire life fighting for the rights of women to education and empowerment. All of Bal Gangadhar Tilak’s daughters had an education, and he did not marry them until they were older than 16.

Ganesh Chaturthi and Shivaji Jayanti grand celebrations were suggested by Bal Gangadhar Tilak. He believed that by celebrating these occasions, Indians would become more united and patriotic. It is a great shame that Bal Gangadhar Tilak’s participation and support for radicalism did not receive the credit it truly deserved.

Bal Gangadhar Tilak’s health started to decline because of his dissatisfaction with the terrible Jalianwala Bagh massacre incident. Bal Gangadhar Tilak urged the Indians to continue the march despite his poor health. He was anxious to lead the movement, but his health prevented him from doing so. At this stage, Bal Gangadhar Tilak’s diabetes had led to a serious weakening. Midway through July 1920, his sickness grew worse, and on August 1 of that year, he passed very abruptly.

Bal Gangadhar Tilak was a social conservative despite having strong Nationalist sentiments. He was a devoted Hindu who wrote extensively about religion and philosophy using Hindu Scriptures. He was one of the most well-known influences of his day, a powerful orator who rallied millions of people to his cause.

Ganesh Chaturthi, which Tilak established, is now regarded as the most important holiday in Maharastra and neighbouring states. Due to his status as an iconic representative of the Indian Freedom fight, Tilak has been profiled in a number of books. The Tilak-founded Marathi newspaper is still published today, however it is now published daily rather than weekly as it was back then.

Q) Who is the father of Indian revolution?

Ans. With his electrifying slogan, “Swaraj is my birth-right and I shall have it” Lokmanya Bal Gangadhar Tilak stirred the Indian people and breathed new life into our struggle of freedom.

Q) Which is a famous quote by Bal Gangadhar Tilak?

Ans. Swaraj is my birthright, and I shall have it is a famous quote by Bal Gangadhar Tilak

Q) Who gave Tilak the title of Lokmanya?

Ans. Rand and his assistant were killed and Tilak was charged with incitement to murder and sentenced to eighteen months’ imprisonment.

Q) Who is called Mother of India?

Ans. The concept of bharat Mata as the personification of the Indian subcontinent came into existence starting in the late 19th century, especially after the Indian Rebellion of 1857 against the British.

Who is the father of Indian revolution?

What is Bal Gangadhar Tilak slogan?

With his electrifying slogan, “Swaraj is my birth-right and I shall have it” Lokmanya Bal Gangadhar Tilak stirred the Indian people and breathed new life into our struggle of freedom.

Which is a famous quote by Bal Gangadhar Tilak?

Swaraj is my birthright, and I shall have it is a famous quote by Bal Gangadhar Tilak

Who gave Tilak the title of Lokmanya?

Rand and his assistant were killed and Tilak was charged with incitement to murder and sentenced to eighteen months' imprisonment.

Who is called Mother of India?

The concept of bharat Mata as the personification of the Indian subcontinent came into existence starting in the late 19th century, especially after the Indian Rebellion of 1857 against the British.