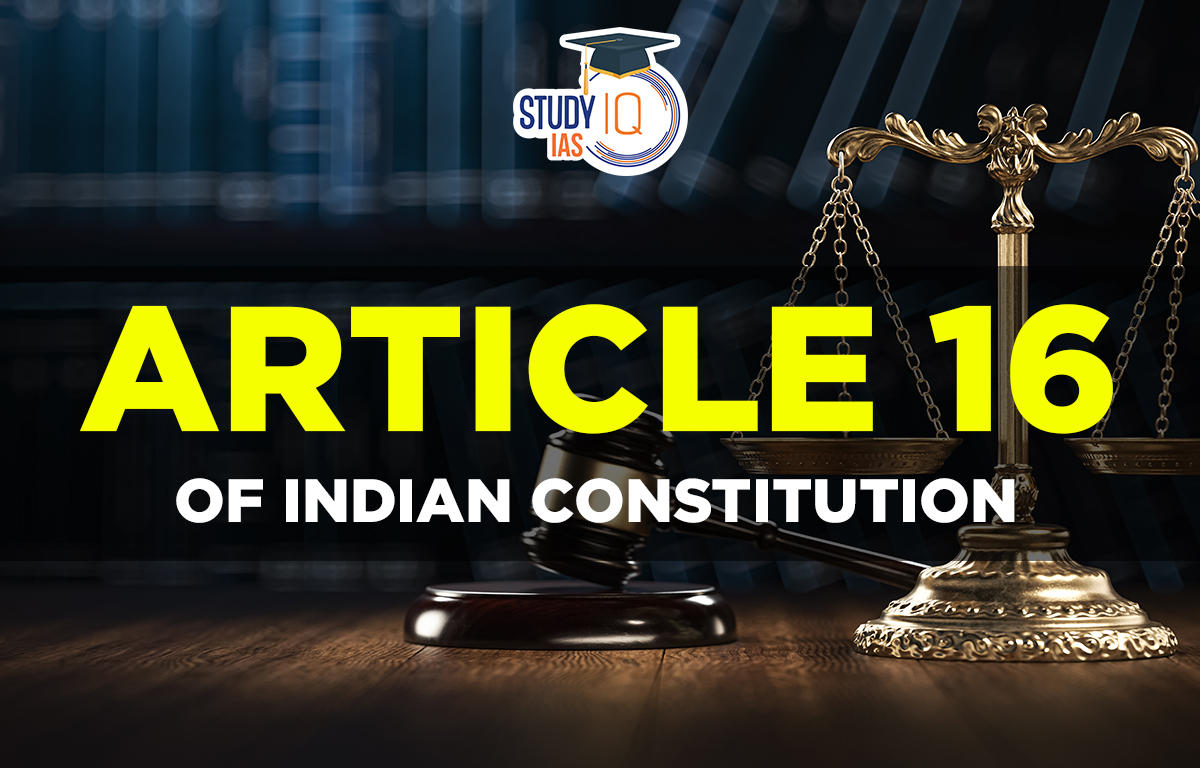 Equal opportunity in matters of appointment to State functions is what Article 16 promises. According to his or her credentials and capabilities, every citizen should be eligible for employment or appointment to any office under the State, according to the concept of equality of opportunity, as the Supreme court in its judgement of State of JK vs KNVT Kholo 1974 held.

All citizens must have an equal chance to be hired or appointed to employment within the State, according to this clause. Only positions held on behalf of the state, such as employment or office, are subject to the limitation. i.e., the person in a position of power inside the state.

In light of this, the provision does not restrict the state from setting the appropriate standards for hiring into government positions, and the authority is free to set any further appointment requirements that would be beneficial in maintaining adequate discipline among the servants.

Consequently, the following are covered by the guarantee in clause (1): (a) initial appointments, (b) promotions, (c) termination of employment, and (d) issues pertaining to the wage, periodic increments, leave, gratuity, pension, age of superannuation, etc. The equal pay for equal effort principle is also covered in clause 16(1).

The experience of reservation in practice, as correctly noted by Justice V.R. Krishna Iyer, demonstrated in M Thomas v State of Kerala, 1976, that the benefits were largely taken by the top creamy layer of the backward classes or classes, keeping the weakest among the weak and leaving the fortunate layers to consume the entire cake. significantly lessened by the passage of time, greater educational standards, and more work options.

No citizen will be excluded from or subject to discrimination in connection with any employment or office under the State solely on the basis of religion, race, caste, sex, descent, place of birth, or domicile, or any combination of these factors. The phrase “any occupation or office under the State” makes it clear that only public employment is covered by Article 16(2).

In K.C. Vasanth Kumar v. State of Karnataka 1985, the Supreme Court ruled that the mean test should be the basis for any reservations made in favour of underprivileged groups (backward classes). It has also been suggested that the reservation policy be revisited approximately every five years to determine whether a class has advanced to the point where reservations are unnecessary. Its name ought to be removed from the group of backward classes.

For specific jobs or appointments in a state, union territory, local authority, or other authority, Parliament may stipulate residency requirements.

Hence, the parliament made a law Public Employment (Residence Requirements) Act, 1957, in which residence was made necessary for public employees in states like Andhra Pradesh, Manipur, Tripura, and Himachal Pradesh. At, present no such provision for any state stays except Andhra Pradesh and Telangana.

Supreme Court under M R Balaji v Mysore case 1963, put a 50% restriction on a reservation in nearly all states, with the exception of Tamil Nadu (69%, under the 9th schedule), and Rajasthan (68% quota, including 14% for advanced castes, post-Gujjar violence 2008). In 1980, Tamil Nadu went over the boundary.

The state may, if it so wishes, provide precedence for appointments or employment to any member of the underprivileged class in society.

In Devadasan v. Union of India, the Supreme Court examined the application of Article 16(4). In this instance, the “carry forward rule,” created by the government to control the appointment of people from underprivileged classes to government positions, was at play.

The “carry forward rule” was declared unconstitutional by the Supreme Court on the grounds that the government cannot use its power in such a way as to deny members of classes other than backward classes fair equality of opportunity in areas of public employment.

A law can provide that the incumbent of an office related to a religious or denominational institution or a member of its governing body should belong to the particular religion or denomination.

In simple words, a temple can make a rule that the priests must belong to the Hindu religion only or a mosque can ensure that the Imam must be someone who follows Islam. And these rules made by such institutions won’t be considered against Art. 16.

It is clear from this that Article 16(5) is a type of exception that prioritises Article 26 “Freedom to manage religion matters” over Article 16 “Equality of opportunity in the matter of public employment.”

A reserve of up to 10% of appointments or positions for any economically underprivileged groups of citizens may be made by the state. This additional reservation of up to 10% would be made in addition to the current one. The state would periodically notify the economically disadvantaged areas for this purpose based on family income and other economic disadvantage indicators.

In accordance with Article 340 of the Constitution, the Morarji Desai Government created the Second Backward Classes Commission in 1979 to look into the social and educational circumstances of the underprivileged classes and provide recommendations for their improvement. Because Bindeshwari Prasad Mandal served as its chairman, the commission is also known as the Mandal Commission.

Indra Sawhney case popularly known as the Mandal case, the scope and extent of Article 16(4), which provides for the reservation of jobs in favour of backward classes, have been examined thoroughly by the Supreme Court. Though the Court has rejected the additional reservation of 10% for poorer sections of higher castes, it upheld the constitutional validity of 27% reservation for the OBCs under certain conditions.

It also rules on promotion under article 14 that, reservation should be confined to initial appointments only and no reservation in promotions.

People in contemporary societies strongly accept the idea of “equality of opportunity.” When closely analyzed, equality of opportunity can be divided into numerous distinct principles, some of which are antagonistic rivals. There is debate over which of these values, if any, should be enforced through coercion. It’s usual to think of a community as desirable in and of itself if there is no discrimination based on presumed characteristics like race, ethnicity, religion, sex, or sexual orientation. Many people believe that the ideal always has greater strength than any possible justification.

Is Article 16 an absolute right?

No, it’s not an absolute fundamental right as it is providing with reasonable restrictions under article 13 to 16.

It states that, all citizens must have an equal chance to be hired or appointed to employment within the State, according to this clause

It states that, no citizen will be excluded from or subject to discrimination in connection with any employment or office under the State solely on the basis of religion, race, caste, sex, descent, place of birth, or domicile, or any combination of these factors

When was Mandal commission appointed?

As per Article 340 of the Constitution, the Morarji Desai Government created the Second Backward Classes' Commission in 1979 to look into the social and educational circumstances of the underprivileged classes

Which case was also known as Mandal case?

Indra Sawhney case 1993, was known as Mandal Case which upheld the constitutional validity of 27% reservation for the OBCs under certain conditions.