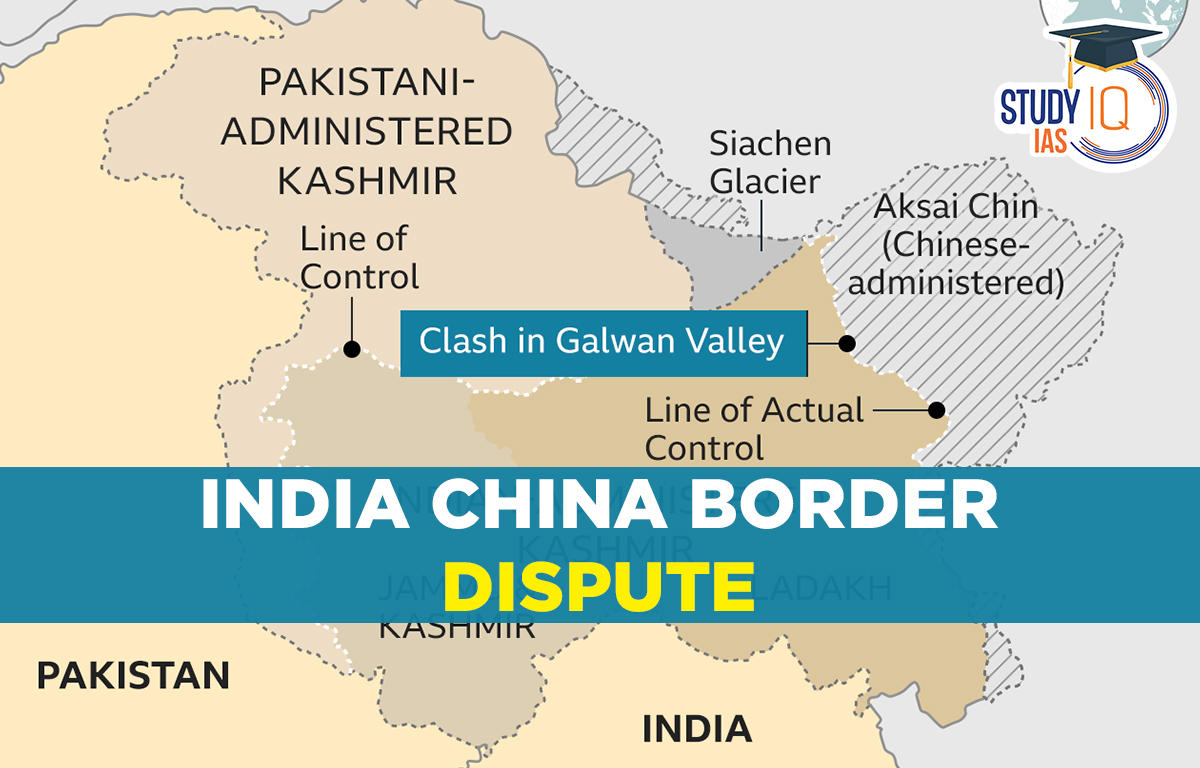 A territorial dispute or boundary dispute is a disagreement between two or more political entities over the possession or control of the land. They are often related to the possession of natural resources such as rivers, fertile farmland, and mineral or petroleum resources although the disputes can also be driven by culture, religion, and ethnic nationalism.

The relationship between India-China can be dated back to more than 2,000 years ago. Both countries have had cultural and economic ties since ancient times. At present India and China are the two major and fastest-growing economies of the world as well as the two most populous countries of the world. The 72-year-old diplomatic relationship between India and China was officially established in 1950 and has been marked with multiple territorial disputes.

The total boundary shared between India and China is around 3488km (2nd highest after Bangladesh). The border is generally divided into 3 sectors namely; Eastern, Western and Middle Sector. A total of 5 states share boundaries with China, Jammu & Kashmir, Himachal Pradesh, Uttarakhand, Sikkim and Arunachal Pradesh.

Here is the major India-China Border Dispute shown below along the border area:

India shares a boundary of about 2152 km with China in the western sector. It lies between Jammu and Kashmir and Xinjiang and Aksai Chin is the disputed territory of this region. The dispute of Aksai Chin can be dated back to the failure of the Colonial Empire failing to demarcate the clear border between India and China.

Johnson Line and McDonald Line were the two borders lines proposed by the Britishers, India considers Johnson’s line (proposed in 1865) which kept Aksai Chin in Jammu Kashmir i.e., under India’s control whereas McDonald Line (proposed in 1893) which placed Aksai Chin under China hence China considers it as the main borderline. At present, LAC is the border line separating Indian areas of Jammu & Kashmir from Aksai Chin which is concurrent to the Chinese-claimed Aksai Chin.

It is about a 625km long boundary, it is the only sector where both countries have fewer disagreements, and it borders Ladakh and Nepal. The border of Uttarakhand and Himachal Pradesh touches the border of Chinese occupied region of Tibet.

It is an 1140 km long boundary with China that extends from eastern Bhutan to the Talu Pass over the Trijunction of Tibet, India and Myanmar. This boundary line is named as McMahon Line. China considers the McMahon line illegal. In Shimla Accord which held in 1914 to settle the boundary dispute between Tibet in India and Tibet and China though the representatives of China did not accept this accord.

The entire state of Arunachal Pradesh is claimed by China as part of its Tibet province. The Chinese government refers to this state as South Tibet. It is worth noting that Taiwan, which India does not recognize as a country and still maintains friendly relations with, also maintains claims over Arunachal Pradesh. Taiwan’s territorial claims are apparently bigger than Chinese territorial claims.

Doklam Valley near the trijunction of India, China and Bhutan, the Chinese attempted to construct a road through the Doklam Plateau region is 100km in size and bounded by Ha Valley of Bhutan, Chumbi Valley of Tibet (China) and the Indian state of Sikkim which being a disputed territory claimed both by China & Bhutan.

Aksai Chin is the southwest extension of the Tibet Plateau. The main issue with this region is that the Chinese is making a military road to connect Tibet and Xinjiang region. China got control of this region after the 1962 Sino-Indian War. China considers it part of its Xinjiang province. And Demchok and Chumar sectors of Ladakh as parts of its Tibet province.

It appears that while increased economic contacts between Beijing and New Delhi are driven by a desire for tighter cooperation, their bilateral diplomatic interactions are still characterized by competitiveness.

India and China will have had diplomatic relations for 70 years as of April 1st, 2020. It is important for both parties to recognise how precarious the situation is and how the recent events, in particular, have undone years of meticulously negotiated confidence-building measures.

Restoring the border’s original status quo, as it was in April, must be India’s first priority. Both a military show of force at the border, where we must resist Chinese aggression and diplomatic efforts, where we must make it plain to China that its intervention will have serious consequences in all areas of our relationship, are necessary to achieve this.

Even in the digital sphere, India cannot afford to disconnect all of its commercial ties with the second-largest economy in the world. Chinese financing will support India’s emerging economy. However, India can attempt to replace Chinese products with domestic ones in the sectors where it is feasible under the Atmanirbhar Bharat Abhiyan. It also has to strengthen its economic ties with other nations.

What is the length of the border between India and China?

India and China border line extends from Jammu and Kashmir to Arunachal Pradesh with length of 3488km.

How many states of India touches the border of China?

States that touch the border of China are, J&K, Himachal Pradesh, Uttarakhand, Sikkim and Arunachal Pradesh.

Which section of India Chinese border is called as McMahon Line?

The region of Arunachal Pradesh region comes under it.

The India Chinese Border can be divided in how many sectors?

The border is generally divided into 3 sectors namely; Eastern, Western and Middle Sector.

What is the length of the Eastern Sector?

It is a 1140 km long boundary with China that extends from eastern Bhutan to the Talu Pass over the Trijunction of Tibet, India and Myanmar.