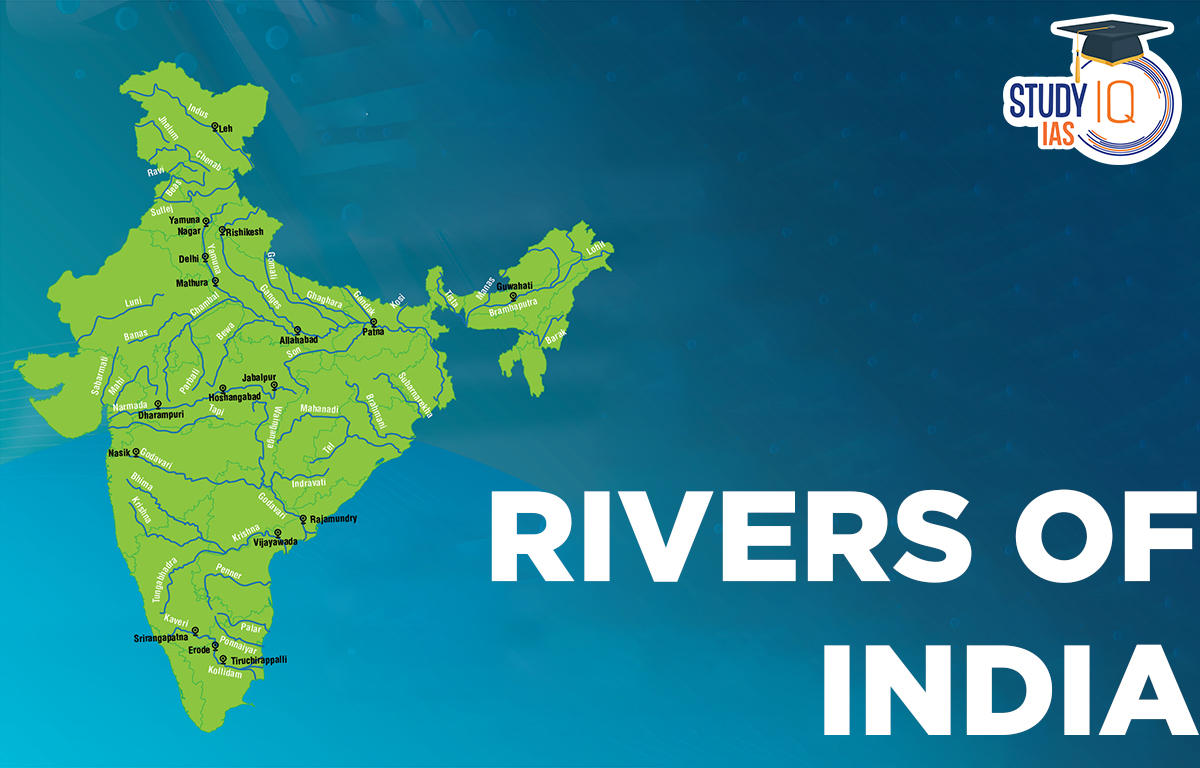 The Indian people’s lives are significantly impacted by the rivers of India. In addition to providing energy, affordable transportation, irrigation, and drinking water, the nation’s river systems also support a vast number of people’s livelihoods. This explains why almost every major city in India is situated along a river. All of the nation’s Hindus regard the rivers as holy since they play a significant role in Hindu mythology.

The Indian River System is made up of seven major rivers (the Indus, Brahmaputra, Narmada, Tapi, Godavari, Krishna, and Mahanadi) with a large number of tributaries. The Bay of Bengal receives water from the majority of rivers. Some of the rivers that flow through the western region of the nation and eastward into the Himachal Pradesh state discharge into the Arabian Sea. Inland drainage can be found in sections of Ladakh, the northern Aravalli range, and the dry Thar Desert. One of the three primary watersheds serves as the source for all of India’s major rivers.

Here’s the complete list of Rivers of India with states:

The Ganga, Indus, and Brahmaputra rivers systems are the main Himalayan river systems. Huge basins are created by the Himalayan Rivers. The Himalayas are traversed by several rivers. During the time of the Himalayan uplift, the river’s down-cutting created these deep valleys with sheer rock sides. They carry massive loads of sand and silt up the streams while engaging in the vigorous erosional activity. Large meanders and numerous depositional structures, including flood plains, river cliffs, and levees, are formed in the plains.

The Narmada, Tapi, Godavari, Krishna, Kaveri, and Mahanadi river systems are among the major peninsular river systems. The Peninsular Rivers traverse modest valleys. Since their flow depends on rainfall, many of them are seasonal. Because of the softer slope, erosional activity is also relatively modest in intensity. There isn’t much room for meandering because of the firm granite bed and lack of sand and silt. As a result, many rivers follow straight, horizontal courses. There are numerous prospects for hydroelectric electricity along these rivers.

A significant river in east-central India is the Mahanadi. It begins in Chhattisgarh’s Sihava Mountains and runs primarily through the state of Orissa (Odisha). Compared to other rivers in the Indian subcontinent, this river deposits the most silt. Sambalpur, Cuttack, and Banki are cities where the Mahanadi flows

After the Ganga, the Godavari River has the second-longest course in India. The river rises in Maharashtra in Triambakeshwar, and it eventually runs through the states of Maharashtra, Chhattisgarh, Madhya Pradesh, Orissa (Odisha), Telangana, Andhra Pradesh, Karnataka, and Puducherry before emptying into the Bay of Bengal. The river is referred known as Dakshina Ganga because of its lengthy course.

A river in central India is called the Narmada or Nerbudda. It is 1,289 kilometres (801 miles) long and serves as North India’s and South India’s traditional borders.

Central India’s Tapi River is a river. With a length of about 724 km, it is one of the main rivers in peninsular India. Only the Tapi River, the Narmada River, and the Mahi River flow from east to west.

The Krishna is one of India’s longest rivers (about 1300 km in length). It starts in Maharashtra at Mahabaleswar, travels through Sangli, and ends in Andhra Pradesh at Hamasaladeevi, where it joins the sea in the Bay of Bengal.

One of India’s main rivers, the Kaveri (sometimes called Cauvery or Kavery), is revered by the Hindus. Dakshin Ganga is another name for this river. It discharges into Bengal Bay.

Rivers of India: The Indus Rivers

The Indus has its beginnings on the northern Kailash range in Tibet, close to Lake Manasarovar. Through Tibet, it travels in a northwesterly direction. In Jammu and Kashmir, it crosses into Indian territory. In this area, it creates an attractive gorge. In the Kashmir region, it is joined by the Zaskar, the Shyok, the Nubra, and the Hunza. Jhelum, Chenab, Ravi, Beas, and Sutlej are the principal Indus River tributaries in India.

The Jhelum begins in a spring near Verinag, which is located in the southernmost region of Kashmir. After entering the northward-facing Wular Lake, it subsequently empties into Baramula. It enters a deep gorge created by the river in the Pir Panjal Mountain between Baramula and Muzaffarabad.

The confluence of two rivers, the Chandra and the Bhaga, which come from opposite sides of the Bara Lacha Pass in Lahul, gives rise to the Chenab. In Himachal Pradesh, it is also known as the Chandrabhaga.

The Ravi has its beginnings close to the Rotang pass in the Kangra Himalayas and travels in a northwestern direction. When it enters the Punjab plain at Madhopur, it cuts a gorge in the Dhaola Dhar Mountain before turning south-west around Dalhousie.

Beas Kund, which is close to the Rohtang pass, is where the Beas begins. It passes through Manali and Kulu, where its lovely valley is referred to as the Kulu valley.

The Rakas Lake in Tibet, which has a stream connecting it to the Manasarovar Lake, is where the Sutlej starts. It enters Himachal Pradesh at the Shipki Pass, where it joins the Spiti river, flowing north-westerly.

Rivers of India: The Brahmaputra River

The Mansarovar Lake, which is also the source of the Indus and the Satluj, is where the Brahmaputra originates. The majority of its course is outside of India; however it is significantly longer than the Indus. It moves parallel to the Himalayas, flowing eastward. After passing Namcha Barwa (7757 m), it makes a U-turn to enter Arunachal Pradesh, India, where it is called as Dihang. This river undercuts by a distance of about 5500 meters. Several tributaries join it as it runs through Arunachal Pradesh and Assam in India..

Rivers of India Names with States

What are the 7 major rivers in India?

The Indian RIver system is made up of seven major rivers (the Indus, Brahmaputra, Narmada, Tapi, Godavari, Krishna, and Mahanadi) with a large number of tributaries. The Bay of Bengal receives water from the majority of rivers.

How many rivers are there in India?

In total, India has more than 400 rivers and 8 major river systems. Due to their critical relevance for sustaining life and their significance in Indian faiths, rivers play a significant part in the lives of the Indian people.

Who is the largest river of India?

As of 2022, the Indus is India's longest river with a length of over three thousand kilometres. It rises in Tibet from Lake Mansarovar and flows through the states of Ladakh and Punjab before joining the Arabian Sea at Pakistan's port of Karachi.

Which is the No 1 River in India?

Which is world biggest river?

Which is deepest river in India?

The Brahmaputra River, which may reach depths of 380 feet, is the deepest river in India. It originates in the Chemayungdung glacier of the Kailash range close to the Mansarovar lake, making it one of the world's greatest rivers.