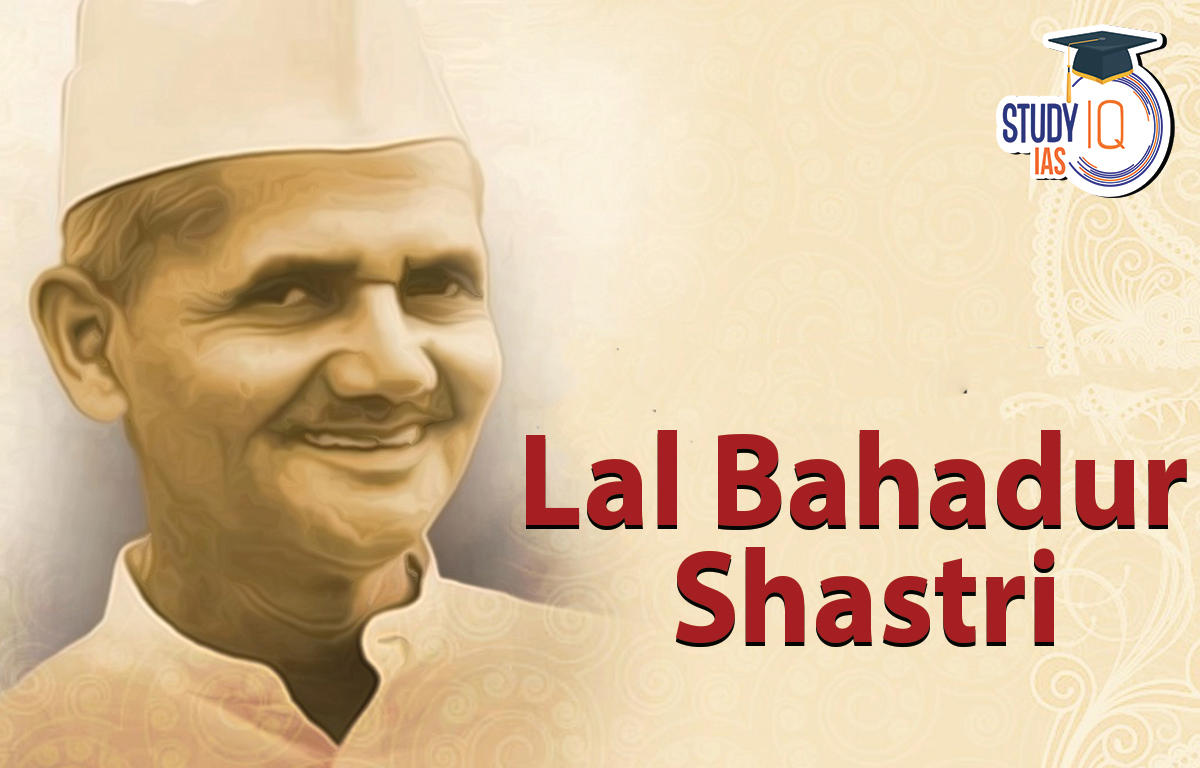 The second Prime Minister of an independent India was Lal Bahadur Shastri. After the unexpected passing of the first Prime Minister, Jawaharlal Nehru, he took the oath. He was very fresh to the position of power when he successfully guided the nation through the Indo-Pakistan War in 1965. He made the phrase “Jai Jawan Jai Kisan” well-known by emphasizing the importance of self-sufficiency and independence as the cornerstones of a powerful nation. His diminutive, weak frame and soft-spoken demeanor belied a guy of extraordinary will power. He preferred to be known for his work than for carefully prepared speeches making lofty claims.

Ramdulari Devi and Sharada Prasad Shrivastava welcomed Lal Bahadur Shastri into the world on October 2, 1904 in Mughalsarai, United Provinces (modern day Uttar Pradesh). The nation’s founding father, Mahatma Gandhi, also has the same birthday as him. Lal Bahadur wanted to abandon his last name because he disagreed with the current caste system. After he graduated from Kashi Vidyapeeth in Varanasi in 1925, he was given the title “Shastri.” A “scholar” or someone skilled in the “Holy Scriptures” is referred to by the term “Shastri”.

When Lal Bahadur was just two years old, his father Sharada Prasad, a schoolteacher by profession, went away. He and his two sisters were taken to their maternal grandfather HazariLal’s home by their mother Ramdulari Devi. In his early years, Lal Bahadur learned the virtues of bravery, love of exploration, patience, self-control, courtesy, and selflessness.

Lal Bahadur was moved to Varanasi to finish his primary schooling there before staying with his maternal uncle. The youngest daughter of Ganesh Prasad, Lalita Devi, was married to Lal Bahadur Shastri in 1928. He declined to accept dowry because he disagreed with the current “dowry system.” But after persistent prodding from his father-in-law, he consented to accept as dowry merely five yards of khadi (cotton that is often handspun). The couple has six kids.

Young Lal Bahadur became motivated to join the Indian nationalist movement after being moved by the tales and speeches of national leaders. Additionally, he enjoyed reading international writers like Marx, Russell, and Lenin. After hearing a speech by Mahatma Gandhi in 1915, he decided to actively take part in the movement for India’s independence.

Before becoming the Prime Minister of India, Lal Bahadur Shastri held a number of jobs. He was appointed the Minister of Police in the Govind Vallabh Panth Ministry of Uttar Pradesh following Independence. His advice included the use of “water-jets” as opposed to lathis to scatter the unruly crowd. Shastri was invited to join the Union cabinet as Minister for Railways by Jawaharlal Nehru after being impressed with his attempts to modernize the state police force.

On June 9th, 1964, the mild-mannered and soft-spoken Lal Bahadur Shastri took over for Jawaharlal Nehru. Despite the fact that the Congress had several more powerful leaders, Shastri became the consensus choice after Nehru’s untimely death. Shastri, a supporter of Nehruvian socialism, exhibited great composure in trying circumstances.

Shastri addressed a number of basic issues such the lack of food, unemployment, and poverty. Shastri requested the experts to develop a long-term plan to deal with the severe food scarcity. This marked the start of the infamous “Green Revolution.” He contributed to the promotion of the White Revolution in addition to the Green Revolution. During Shastri’s time as prime minister in 1965, the National Dairy Development Board was established..

During Shastri’s presidency, India experienced another aggression in 1965 from Pakistan following the Chinese aggression of 1962. Shastri demonstrated his mettle by making it abundantly apparent that India will not merely stand by. He said, “Force will be confronted with force,” while giving the Security Forces freedom to counterattack.

On September 23, 1965, the Indo-Pak War came to an end as the United Nations voted a resolution calling for a truce. On January 10, 1966, Lal Bahadur Shastri and his Pakistani counterpart Ayub Khan signed the Tashkent Declaration after Russian Prime Minister Kosygin promised to intercede.

It was a pact that the prime ministers of the two nations signed in 1964. The agreement had a profound impact on the status and future of Indian-born residents of Ceylon (later Sri Lanka), who were the offspring of British-transported tea estate laborers.

Following a military takeover in 1962, Burma deported a number of Indian families in 1964, which put the two countries’ relations under strain. In 1965, Shastriji paid an official visit to Rangoon, and friendly relations between the two countries were once more established.

The Second Kashmir conflict, sometimes known by that name, was the result of multiple clashes between Pakistan and India in 1965. Shastriji led India in the battle valiantly despite being a strong adherent of Gandhiji’s concept of non-violence. The conflict started with Pakistan’s operation Gibraltar to sneak forces into Jammu and Kashmir.

“Jai Jawan, Jai Kisan” was the slogan he used when addressing the country, paying homage to the border soldiers and the farmers battling the food crisis. The Soviet Union and the United States intervened diplomatically, resulting in the Tashkent declaration, which led to the UNSC resolution 211 declaring a truce and ending the hostilities.

Read about: Viceroy of India

Lal Bahadur Shastri, who had already experienced two heart attacks, passed away on January 11, 1966, from a third cardiac arrest. The only current Indian Prime Minister to have passed away abroad is he. In 1966, Lal Bahadur Shastri received a posthumous Bharat Ratna, India’s highest civilian honour.

Many questions were raised when Shastri passed away unexpectedly soon after agreeing to the Tashkent Pact with Pakistan. Shastri was allegedly poisoned, and the Russian butler who was serving the Prime Minister was detained, according to his wife Lalita Devi. However, he was later freed after medical experts determined that Shastri had died of heart arrest. The CIA may have been involved in Shastri’s death, according to a potential conspiracy theory that was reported in the media. The Prime Minister Office rejected the RTI request made by author Anuj Dhar, citing a potential deterioration in relations with the US.

Lal Bahadur Shastri was India’s most upright prime minister and politician. He was a faithful adherent of Gandhi’s idea to not gain wealth or personal property, despite the fact that he was a minister. In 1966, he received the Bharat Ratna posthumously, and the same year, a stamp honoring him was also issued.

As he always preferred to maintain friendly relations with the neighbours by nonviolent means, he was known as “The Man of Peace.” The Lal Bahadur Shastri National Academy (LBSNAA) of Administration is the name of the IAS training facility in Mussoorie.

Q) Why Lbsnaa is named so?

Q) Who is known as man of peace?

Ans. Lal Bahadur Shastri is known as man of peace

Q) What were the achievements of Lal Bahadur Shastri?

Ans. Cardiac arrest is when the heart suddenly and unexpectedly stops beating. It is a medical emergency that, without immediate medical intervention, will result in sudden cardiac death within minutes. Cardiopulmonary resuscitation and possibly defibrillation are needed until further treatment can be provided.

Q) Why did Lal Bahadur Shastri got Bharat Ratna award?

Ans. India celebrates the 118th birth anniversary of Lal Bahadur Shastri, the nation’s second Prime Minister. Shastri, who succeeded Jawaharlal Nehru, was respected for his forthrightness and honesty, and after his passing, he was awarded the Bharat Ratna, making him the first posthumous laureate of this prestigious award.

Why Lbsnaa is named so?

Who is known as man of peace?

Lal Bahadur Shastri is known as man of peace

What were the achievements of Lal Bahadur Shastri?

How did Lal Bahadur Shastri died?

Cardiac arrest is when the heart suddenly and unexpectedly stops beating. It is a medical emergency that, without immediate medical intervention, will result in sudden cardiac death within minutes. Cardiopulmonary resuscitation and possibly defibrillation are needed until further treatment can be provided.

Why did Lal Bahadur Shastri got Bharat Ratna award?

India celebrates the 118th birth anniversary of Lal Bahadur Shastri, the nation's second Prime Minister. Shastri, who succeeded Jawaharlal Nehru, was respected for his forthrightness and honesty, and after his passing, he was awarded the Bharat Ratna, making him the first posthumous laureate of this prestigious award.