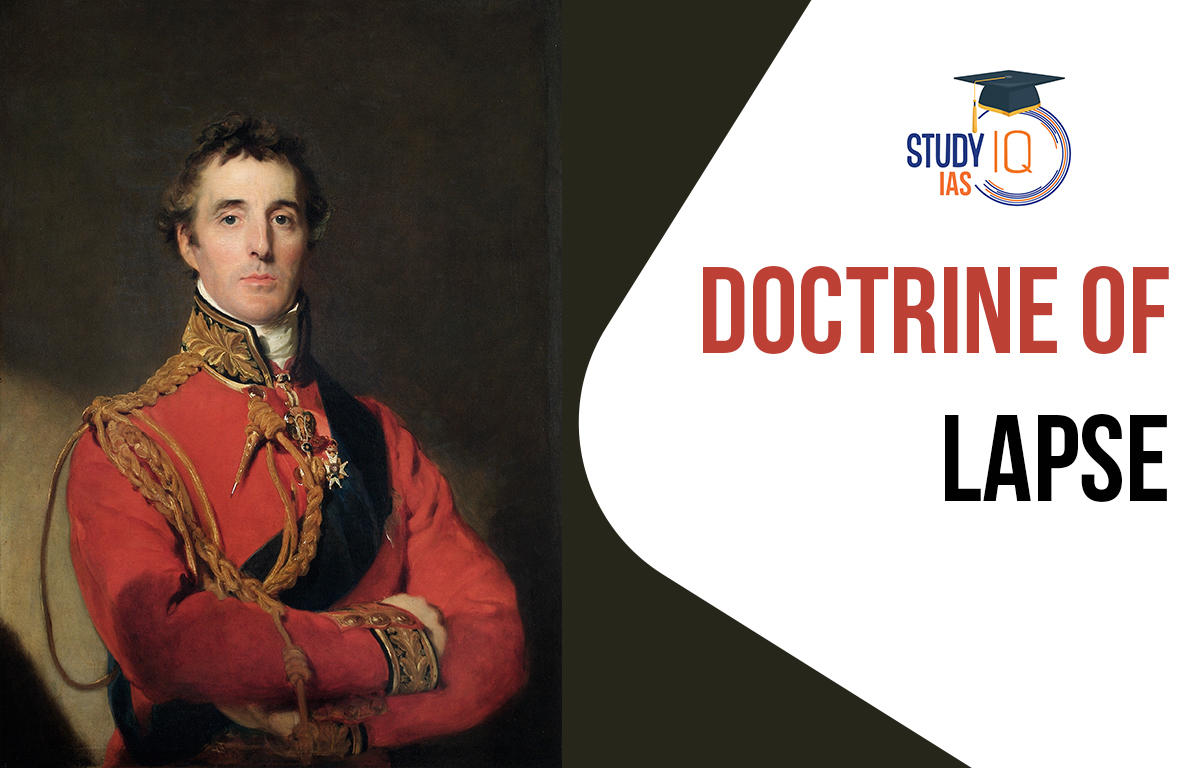 The Doctrine of Lapse was a strategy for annexation developed by Lord Dalhousie, the Governor-General of India, between 1848 and 1856. The notion of annexing those states without inheritors was proposed. They no longer have the authority to rule, and adoption will not restore it. The strategy is most frequently associated with Lord Dalhousie, who served as the Governor-General of the East India Company in India from 1848 to 1856.

However, it was declared by the Court of Directors of the East India Company as early as 1847, and numerous small countries had already been purchased using this idea before Lord Dalhousie assumed the position of Governor-General. On the other hand, Dalhousie used the strategy the most actively and widely. Consequently, a lot of people link it with him.

Read about: Viceroy of India

At the time of its receipt, the East India Company possessed royal regulatory jurisdiction over vast areas of the continent. The company took over the prestigious lands of Satara (1848), Bhagat (1850), Jaitpur and Sambalpur (1849), Udaipur (Chhattisgarh) (1852), Nagpur (1854), Jhansi (1853), Tore and Arcot (1853) under the assumption of a pass (1855). Oudh (1856) was added under the Doctrine of Lapse, as is typical. However, as far as anyone can tell, ruler Dalhousie held on to it misgovernance.

By arguing that the monarch was not governing efficiently, this type of thought helped the company earn about 4,000,000 pounds extra in profit each year. Hatred erupted among several facets of Indian society as a result of the East India Company’s growing influence, especially among disbanded warriors who fueled the evicted governments during the 1857 Indian Rebellion, also known as the Sepoy Mutiny. The philosophy was abandoned in 1858 by the new British Viceroy of India, whose authority exceeded that of the East India Company.

By putting into practise a “policy of slip by,” the East India Company took over the August province of Kittur, which was represented by Queen Chennamma, in 1824. Lord Dalhousie may not have actually created it in 1848, but by documenting it, he may have given it legal status. Dalhousie’s extensions and the concept of pass were questioned by the majority of India’s powerful rulers.

Read about : Freedom Fighters of India

What is Doctrine of Lapse?

First Marquess of Dalhousie James Andrew Broun-Ramsay, also known as Lord Dalhousie, served as acting governor-general of India from 1848 to 1856. He was a well-known Scottish lawmaker. Even though Lord Dalhousie is famous for being connected to the Idea of Lapse, the East India Company’s Court of Directors took the decision as early as 1847, and other minor states had already been added to the convention before he was appointed Governor-General.

He applied the strategy more widely to increase the East-India Company’s regional influence. The East India Company also used a policy known as the Doctrine of Lapse extensively in India. In the event that a royal state’s ruler failed to provide a beneficiary, the notion declared that each state under the organization’s vassalage would gain its territory. Many Indians thought the theory and its application were flawed. The Doctrine of Lapse doctrine was one of the main factors contributing to the 1857 uprising.

Read about: Princely States in India

The princely states had a ritualised adoption process that they had been using for centuries prior to the advent of this concept. If no capable born-to son was produced, an heir apparent would eventually be chosen from a pool of hopefuls, known as bhayats, who were prepared for succession from a young age (an obviously unsuitable or treasonous born-to son could be excluded from the succession).

If the ruler passed away without designating a successor, one of his widows could choose an heir who would succeed to the throne right away. The adopted person would sever all ties to his biological family. The Indian rulers now had to deal with the following characteristics once the Doctrine of Lapse had been implemented.

If a princely state’s king failed to produce a legitimate male heir, the East India Company would acquire the state, in accordance with this philosophy, whether it was directly or indirectly (as a vassal) under their control. Despite the fact that he documented it and extensively exploited it to win territory for the British, Lord Dalhousie did not invent this.

According to this, no adopted son of the Indian king could be declared the heir to the throne. Only his foster father’s personal belongings and properties would pass to the adoptive son. The adoptive son would not be eligible for any of his father’s titles or pensions that he had previously received. This questioned the Indian king’s long-held right to choose his or her own heir.

Read about: Famous Indian Personalities and their Nicknames

Due to the lack of a biological heir to the throne, several of the Indian princely states lost their lands to the British East India Company under the Doctrine of Lapse. After the policy’s empowerment, a large number of Indian princes lived unhappy lives, which ultimately contributed to the Revolt of 1857.

Nana Sahib and the Rani of Jhansi had issues since the pensions for the heirs were restricted and treated disrespectfully. The introduction of the policy prevented the Rani of Jhansi’s adoptive son from succeeding to the throne. After Lord Dalhousie, the Governor General, left for Britain in 1856, a revolt broke out in 1857, which led to harsh criticism of Lord Dalhousie’s leadership.

Because of this, the British came to India for trade, but their desire to control the country’s resources led them to become quite powerful there. The Doctrine of Lapse was essentially an expansionist strategy used by the British East India Company to capture nearby Indian territories in an effort to make the British Empire appear more realistic. Dalhousie put this in place so that the British East India Company could obtain monopolistic control over the Indian state and boost revenue. As a result, the British were despised and fiercely opposed by the rulers of the various states, which fueled the 1857 uprising.

Q) Who introduced the Doctrine of Lapse?

Ans. When Lord Dalhousie served as India’s governor general from 1848 to 1856, he created a strategy that became known as the “Doctrine of Lapse.”

Q) Which states Doctrine of Lapse?

Ans. The Dalhousie Capture Indian Territories proposed the doctrine of lapse, and Satara was the first Indian state to use it in 1848.

Q) Who abolished the Doctrine of Lapse?

Q) What is Doctrine of Lapse class 10th?

Ans. The Doctrine of Lapse was introduced by Lord Dalhousie. According to this doctrine, if any Indian ruler dies without leaving a male heir, his kingdom would automatically pass over to the British.

Q) Why is it called the Doctrine of Lapse?

Ans. Doctrine of lapse was the pro-imperialist approach to expand the realm of British Kingdom in India. It was introduced by Dalhousie. The Doctrine equipped with an idea to annex those states which have no heir, get lapsed the right of ruling and it will not reverted by adoption.

Who introduced the Doctrine of Lapse?

When Lord Dalhousie served as India's governor general from 1848 to 1856, he created a strategy that became known as the "Doctrine of Lapse."

Which states Doctrine of Lapse?

The Dalhousie Capture Indian Territories proposed the doctrine of lapse, and Satara was the first Indian state to use it in 1848.

Who abolished the Doctrine of Lapse?

What is Doctrine of Lapse class 10th?

The Doctrine of Lapse was introduced by Lord Dalhousie. According to this doctrine, if any Indian ruler dies without leaving a male heir, his kingdom would automatically pass over to the British.

Why is it called the Doctrine of Lapse?

Doctrine of lapse was the pro-imperialist approach to expand the realm of British Kingdom in India. It was introduced by Dalhousie. The Doctrine equipped with an idea to annex those states which have no heir, get lapsed the right of ruling and it will not reverted by adoption.