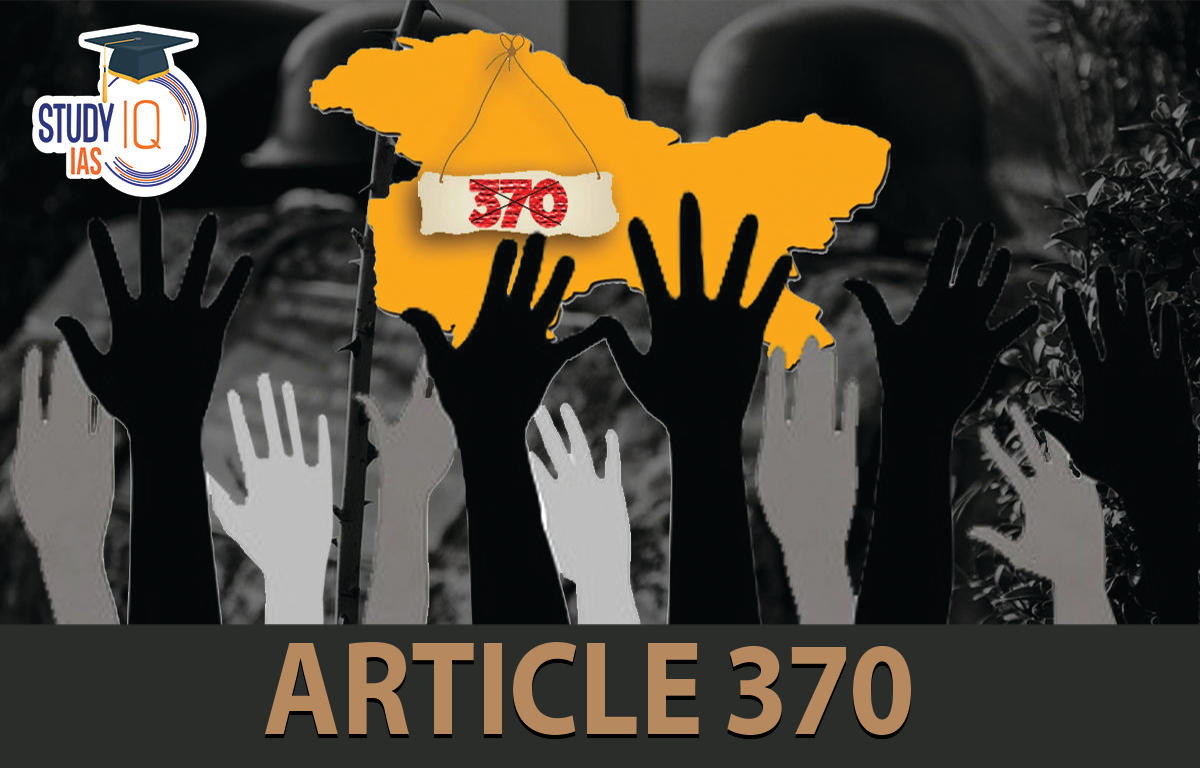 Article 370: After Maharaja Hari Singh, the ruler of the princely state of Jammu and Kashmir, signed the Instrument of Accession on October 26, 1947, the state became a part of the Dominion of India. Article 370 of the Indian Constitution states that J&K is covered only by Articles 1 and 370. The President, in consultation with the state government, was to make the decision about the application of Other Articles.

The Constitution Order of 1950 outlined the themes on which the Union Parliament would have the authority to adopt legislation for Jammu & Kashmir in accordance with the Instrument of Accession; 38 topics from the Union List were included..

The Jammu and Kashmir Constituent Assembly was dissolved after creating the state constitution, and on January 25, 1957, it did so without endorsing either the abrogation or revision of Article 370, leaving the clause’s status in doubt.

Read about: Governor General of India

Article 35A, which derives from Article 370, is distinctive in that it only appears in Appendix I and not in the main body of the Constitution. Until they were removed in August 2019, both of these articles granted the state of J&K and its residents exceptional status and rights.

Sheikh Abdullah was chosen as the article’s drafter by Jawahar Lal Nehru and Maharaja Hari Singh, the J&K state’s then-prime minister. The Constitution (Application to Jammu & Kashmir) Order, 2019, was introduced by Union Home Minister Amit Shah and published in the Official Gazette of India on August 5, 2019. The ruling declared that the state of J&K must abide by all the articles of the Indian Constitution, which resulted in the suspension of J&K’s own constitution. Additionally, the state’s Ranbir Penal Code, which was repealed by Presidential decree in 2019, was replaced by the Indian Penal Code (IPC), 1860, which also went into effect in the state.

The amendment was purchased by the government under Clause 3 of Article 370, not the conventional amending provision provided in Article 368 of the constitution. Hence, avoiding the amending process.

The Central Government will not require permission from the state’s government to implement laws once Article 370 has been successfully abrogated. After Article 370 of the Indian Constitution was repealed, Article 35 A lost all of its effects. Simply put, there won’t be any distinction between J&K’s permanent residents and the rest of the state’s citizens.

Article 370’s elimination helps the people of Kashmir since it allows them to join the rest of India. Both they and Indians have the right to be a part of Kashmir. They are able to apply for scholarships for school. There are government employments available for them in Kashmir.

2. One Nation and One Flag

India as a whole is now gathered. There is no distinct constitution for Indians and Kashmiris. Everyone will adhere to the motto “one nation, one constitution”.

After Article 370 is repealed, Kashmiris can work in the Indians’ newly established firms and make good money. Creating more jobs will inevitably lower crime. The Kashmiris will also benefit economically if they sell their lands to the Indians on a leasing basis.

Private business owners can establish factories in Kashmir, creating jobs for Kashmiris and Indians. The fact that 40% of Kashmiris lack jobs is the main cause of the rise in crime in the valley. Antisocial acts will decline as private investors begin to invest in Kashmir. Land prices will rise, enabling Kashmiris to make significant gains.

5. Right to Education and Information

Read about: Regulating Act of 1773

1. Only a small portion of Kashmir believes it to be unlawful. This decision has been equated to fascism

According to Kashmiris, who categorically deny knowing that the Indian government intended to repeal Article 370. Separately, this was withdrawn without the J&K government’s consent and without warning. On August 5th, 2019, the internet was shut off, hundreds of troops were summoned, landlines were disconnected, and even Kashmiri lawmakers were placed under house arrest. The Kashmiris were abruptly forced to accept this decision after being locked inside their homes. This choice was made after the State Assembly of Jammu and Kashmir was disbanded and President’s rule was implemented in Kashmir.

2. Many proclaim it as unconstitutional; it was comparable to a dictatorship

The people of Kashmir believe that their demands are being ignored. The imposition of Article 370 on Kashmir was unlawful, and thus amounts to deceiving the Kashmiris. The Indian leaders are not even paying attention to the democratically elected J&K lawmakers. 370 were eliminated from the constitution during a time when there was no state assembly. It is considered cheating because the public was informed that 10,000 troops had been sent to the Kashmir Valley because there was a possibility of a terrorist attack.

3. J&K no longer has the status of a state; instead, it is now considered to be union territory

Jammu and Kashmir previously had a special status that was lowered as a result of article 370. However, it has now descended to a status below normal and been designated a union territory. Union territories have significantly lower levels of democracy than regular states, and as a result, the federal government will now have much more power over the territory..

4. Not all choices can be made by the elected state government

The Kashmiris would be able to choose the state administration after article 370, but their rights will not be the same as they are now. In J&K, democracy will now suffer. The decision is not being fully accepted by the people of Kashmir, which will eventually lead to more political and social tensions. This choice won’t be implemented unless the Kashmiri population desires to assimilate with Indians..

Read about: Attorney General of India

Ans. Jammu and Kashmir has a special position in terms of autonomy and the ability to create laws for the state’s permanent residents, which is highlighted in Article 370 of the Indian Constitution.

Q) What was the Article 370 removal date?

Q) Who proposed the concept for Article 370?

Ans. The Indian Supreme Court declared in April 2018 that since the state constituent assembly had ceased to exist, Article 370 had become permanent. Although Article 370 is still a part of the constitution, the Indian government declared it to be “inoperative” in order to get around this legal hurdle.

Jammu and Kashmir has a special position in terms of autonomy and the ability to create laws for the state's permanent residents, which is highlighted in Article 370 of the Indian Constitution.

What was the Article 370 removal date?

The Abrogation of Article 370 was on 5 August, 2019 by the Indian government.

Who proposed the concept for Article 370?

The Indian Supreme Court declared in April 2018 that since the state constituent assembly had ceased to exist, Article 370 had become permanent. Although Article 370 is still a part of the constitution, the Indian government declared it to be "inoperative" in order to get around this legal hurdle.

How did Govt remove Article 370?