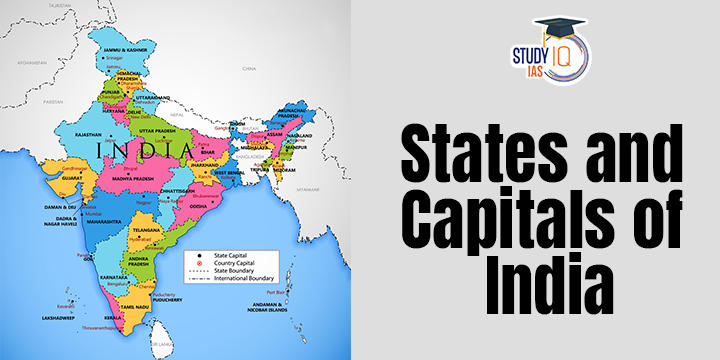 States and Capitals of India 2022: India is the second most populated nation in the world and the 7th largest country overall. It constitutes a union of states in India with a total of 28 states and 8 Union Territories. India is a union of states, and the head of the executive in each state is the Governor, who serves as the President’s representative. Each state in India has a capital that serves as the administrative, legislative, and judicial centre. In other jurisdictions, the capital serves as the hub for all three activities. It is a territory with a chief minister of its own. A state has a unique, independent government. The State Government is in charge of carrying out state duties such law enforcement, health care, administration, and revenue collection.

States of India & their Capitals

India is a republic with a parliamentary form of government that is a sovereign, secular, democratic nation. Both its natural beauty and cultural heritage are plentiful in this country. The linguistic, cultural, and geographic division of India is based on its States and Capitals of India. After becoming independent, it was divided into the British Provinces and the Princely States. The princely states had three alternatives once India and Pakistan were divided:

Out of the 552 princely states that made up India, 549 became part of it, and the other 3 refused. They did, however, eventually integrate. The Indian Constitution was ratified on November 26, 1949, and it went into effect on January 26, 1950. The States Reorganization Act of 1956 altered the state boundaries of India based on linguistic distinctions.

Here are the States and Capitals of India 2022:

Currently, India has a total of 28 States and 8 Union Territories. The administrative, legislative, and judicial capitals are located in each Indian state. Some claim that one capital houses the three responsibilities. A Chief Minister oversees each state’s government. Here, we’ve listed all the Indian States, Union Territories, and their respective capitals. Three states, Himachal Pradesh, Maharashtra, and Uttarakhand, have separate capitals for their summer and winter legislative sessions.

According to the preamble of the Indian constitution, India is a republican, socialist, secular, and independent state. A democratic parliamentary system is used in India. In India, there are 28 states and 8 union territories. The Indian President is in charge of the Union Territories. Both the President and the Governors serve as the executive branches of their respective states. State governments resemble the federal government in many ways. Chief Ministers oversee the state governments.

The 1956 creation of the States Reorganization Act was a major factor in the semantic reorganization of the borders of Indian states. Later, three different sorts of states—part A states, part B states, and part C states—were combined to form a single type of state, per a revision to the Indian Constitution.

The Act is still recognized as an authoritative player in imposing the current shape and forms to the Indian states, despite the fact that significant alterations have been made to the state boundaries since 1947.

States and Capitals of India FAQs

Q What is the name first of state of India?

Ans. Andhra Pradesh was the first state in India to be created on the basis of a language. It originated from Madras State’s northern Telugu-speaking districts. According to the 1956 States Reorganization Act, new states were either created or reorganized along linguistic lines.

Q Which state is removed from 29 states?

Ans. Jammu and Kashmir lost its status as a state on October 31, 2019, and it became a union territory. Ladakh was made into a separate Union Territory and split off from Jammu & Kashmir. Telangana was divided from Andhra Pradesh on June 2, 2014.

Ans. According to the most recent information for the year 2022, India has 28 states and 8 union territories (UTs). India has administrative, legislative, and judicial capitals for each state and union territory. There is a Chief Minister in charge of each state.

Q How many cities are in India?