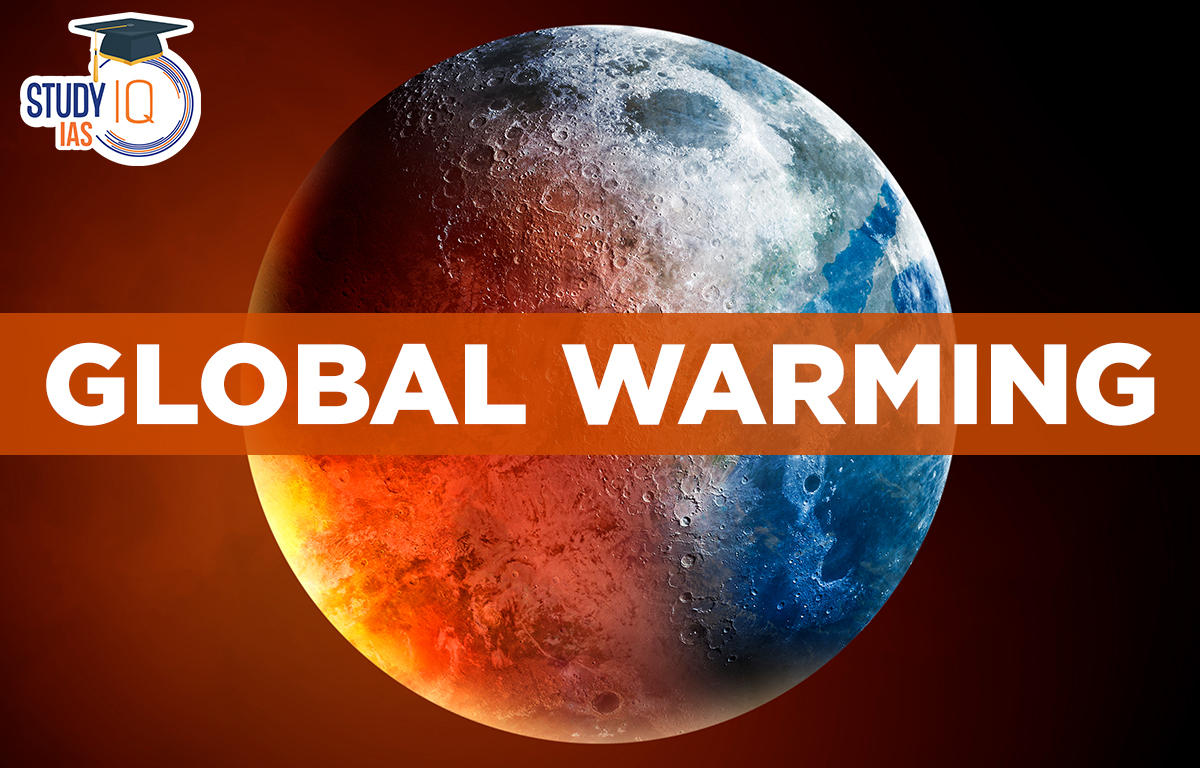 What is Global Warming?

Global Warming is a long-term increase in average global temperature. It is considered a natural phenomenon, but anthropogenic activities on earth, particularly post Industrial Revolution, have led to an increase in the rate of this temperature increase. Various Reports published by the International Panel on Climate Change (IPCC) have time and again highlighted that since 1850 human activities have led to an increase of about 1 degree Celsius in average global temperature. Most of this warming has taken place in the second half of the 20th century. The fact that 5 of the hottest recorded year have occurred since 2015 can help us better understand the calamitous impact of anthropogenic activities.

Green House Gases also known as GHGs in the atmosphere trap the solar radiations that are reflected by the earth’s surface. Under normal circumstances, most of these radiations escape into outer space. However, the release of GHGs by anthropogenic activities has increased their concentration in the atmosphere. Thus, the earth is getting hotter and hotter.

Both phenomena are related to each other. Green House Gases also known as GHGs in the atmosphere trap the solar radiations that are reflected by the earth’s surface. Under normal circumstances, most of these radiations escape into outer space. However, the release of GHGs by anthropogenic activities has increased their concentration in the atmosphere. This is the primary cause of Global Warming.

Increase in the Average Temperature of the Earth

According to IPCC reports, human-induced global warming is responsible for nearly 1 degree Celsius temperature rise vis a vis pre-industrial level. Data from NASA suggest that 2016 has been the hottest year on record.

Across the globe, extreme weather events have increased in occurrence. For example, forest fires in California have become an annual event. Also, it is increasing in frequency each year. Most recently, we have recorded the phenomena of heat waves in Antarctica. The intensity of cyclones in the Bay of Bengal region has increased. Similarly, the frequency of occurrence of El Niño and La Niña has reduced from once in 8–10 years to once in 3–4 years now. More frequent episodes of floods and drought are being recorded every year across the world.

According to IPCC, there is 10% less permafrost in North Hemisphere at present compared to the 1900s. Remote sensing data suggest Arctic ice is melting fast. Experts suggest that not only will the sea level rise with the melting of glaciers, but there is also a danger of new bacteria and viruses being released into the environment which has so far been trapped in ice sheets. This may lead to outbreaks of disease and pandemics which are beyond the control of human medical sciences.

A report published by WMO, suggests that the rate of sea level rise has doubled for the period between 2013 and 2021 compared to the rate for the period between 1993 and 2002. Earth scientists are suggesting that if this phenomenon continues, many human-inhabited coastal areas will be submerged into the sea in the coming decades. Also, with the concentration of carbon dioxide rising in the atmosphere, oceans are absorbing more of it. This is leading to ocean acidification. The impact of this phenomenon can be disastrous for ocean biodiversity, particularly the coral reefs.

Adverse Impact on Terrestrial Ecosystems of the Earth

It has been recorded that many flora and fauna species are heading northwards in Northern Hemisphere. Significant changes have been observed in the migratory movements of birds across the world. Early arrival to their summer feeding and breeding grounds is quite evident. Expert biologists suggest that rising temperatures in the tropical and subtropical regions may lead to an outbreak of new diseases, which in turn may render many floral and faunal species extinct.

A rising number of extreme weather events will have an adverse impact on agriculture and fisheries. Rising global temperatures will have a negative impact on the productivity of human beings, particularly in tropical and subtropical regions of the earth. The impact on life and livelihoods of indigenous people across the world will be even more pronounced.

Global Cooperation for Reduction of Emissions

It is time that the target of containing the global average temperature rise within 1.5 degrees Celsius of pre-industrial levels is taken seriously. Also, global efforts should be based on a spirit of Common But Differentiated Responsibility. This will ensure that historical injustices done to the global south are duly acknowledged, and they have an equal chance to transform themselves into developed countries. Countries must act proactively to achieve Net Zero Emission status at the earliest.

Transition to Cleaner and Greener Forms of Energy

Thermal power plants based on coal should be made more efficient and inefficient ones should be phased off. Also, mass adoption of renewable forms of energy like solar should be promoted. Similarly, avenues for using hydrogen as energy fuel should be looked into. We must also explore the possibility of Nuclear fusion for energy generation, in addition to making nuclear fission-based energy generation safer.

Changes in Agricultural Practices and Land Use

Agriculture based on the use of nitrogenous fertilizers must be replaced with organic farming techniques. Also, methane gas released from agricultural and cattle waste must be trapped as biogas for domestic usage. Massive afforestation drives must be organized. Urban governments must make it a point to include green spaces in urban planning.

The advent of E-vehicles is a welcome change, but we need to make the batteries used in these vehicles more efficient. Urban planners must make public transportation systems inherent as a benchmark of good urban planning. Also, urban planning should be such that it promotes more walking and cycling habits among the residents.

All the above discussions will have no meaning if we as individuals are not sensitive enough. We need to make reducing, reusing and recycling a mantra of our living. It should be our civic duty to save water, and wildlife and raise awareness among others.

It is rightly said that “Charity begins at home.” Climate action will be more efficient if we go by this spirit. To begin with, each individual can make sure that what is happening in their house and immediate surroundings is in harmony with the environment. If this can happen, all the policies we are making at the local, national, regional and global levels will give far better results.

Each year, we read about rising global temperatures. Also, catching the headlines is the news related to disasters caused by events like cyclones, forest fires, floods and drought. All these phenomena can be attributed to one single cause which is global warming.

Global Warming is a long-term increase in average global temperature. It is considered a natural phenomenon, but anthropogenic activities on earth, particularly post-Industrial Revolution, have led to an increase in the rate of this temperature increase.

Why is global warming a problem?

Global Warming at present rate can lead to disastrous impacts like rising sea level, out break of new diseases, extreme weather events among others.

What are 3 causes of global warming?

What are 5 effects of global warming?

Why global warming is important?

Global warming at its natural rate is important to keep up the temperature of earth within the range that makes it habitable. This makes global warming important.

Can we control global warming?

Number of mitigation measures like shifting to cleaning forms of energy and transportation can be taken to control global warming.

Who help with global warming?

Global Warming is a collective challenge for entire humanity. Citizens, civil societies, governments and businesses must act in unison to address it.