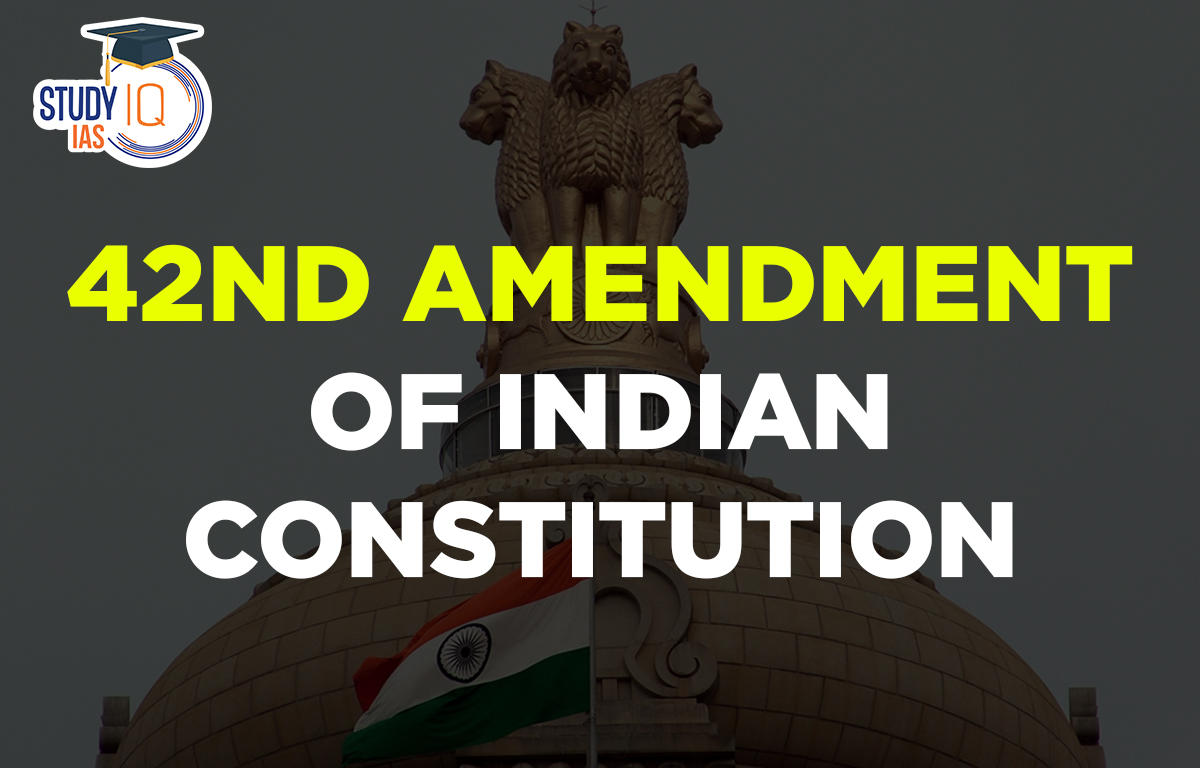 A nation’s growth and future are mostly determined by administrative decisions, judicial rulings, and the laws passed by the legislature. Any given nation’s Constitution governs each of these. By laying down the guiding principles for how the nation would run, the Constitution assumed the function of a supporting structure. Without it, the entire hierarchy and classification system used to run a country would be readily dismantled.

The Constitution of India is crucial because it serves as the cornerstone of government organization. Second, it divides the authority amongst the several State organs. Thirdly, it establishes the nation’s objectives, such as secularism, integration, and democracy. Additionally, it protects people’s fundamental rights, which are essential to their ability to survive.

One of the most significant changes to the Indian Constitution was made by the 42nd Amendment Act of 1976. The Indian National Congress, then led by Indira Gandhi, passed it at that time. It is often referred to as the “Mini-Constitution” because of the numerous revisions it has made to the Indian Constitution. The Constitution Act, 1976, also known as the 42nd Amendment Act, is a crucial component of the UPSC Political Science for the Prelims, Mains GS-II, as well as the Political Science optional papers, making it important for the IAS Exam.

The 42nd amendment to the Indian Constitution, the Constitutional Amendment Act of 1976, is well recognized for its contentious additions and modifications. The modifications were made in accordance with the recommendations provided by the Swaran Singh Committee, which Mrs. Indira Gandhi had established for the same purpose. The Preamble, 40 clauses, the Seventh Schedule, and 14 additional Articles that were added to the Constitution were all modified by this amendment.

It is believed that the preamble reflects the constitution. The constitution’s preamble has two new additions. First off, “Sovereign Socialist Secular Democratic Republic” has taken the place of the previous designation of India as a “Sovereign Democratic Republic.” Second, “unity and integrity of the nation” was used in place of “unity of the nation”. According to reports, this modification encountered a significant response in the legal and popular spheres across the nation for being “an changed portrayal of the Indian Constitution on the world arena.”

Prior to this modification, the Union Legislature’s Acts might even be challenged in court by the High Courts. The general public has found it quite easy to challenge this practise at the high court of their individual State. However, this modification limited the High Court’s authority. In accordance with Articles 226A and 228A, this modification only permitted HCs to rule on the legality of State legislation. Similar to this, Article 131A was adopted to provide the Supreme Court the authority to exclusively consider whether central legislation is legal. Aside from these changes, the Constitution was amended to include Article 144A and Article 228A, which has generated controversy in the area of judicial power.

Suspension of the Fundamental Rights

Since the Constitution’s enactment, the people have continuously been granted their fundamental rights. However, the 42nd amendment introduced the necessary clauses to the Constitution that allow for the suspension of fundamental rights in times of need. Whenever an external emergency is imposed, Article 358 has the effect of suspending the rights granted by Article 19 of the Constitution without any special notice. This clause provides that Article 19 is suspended nationwide for the duration of the emergency and that “emergency laws” are given legal immunity.

Since the Constitution’s founding, it has contained distinct sections for the fundamental rights and Directive Principles. But in order to maintain a friendly relationship, the government and the Swaran Singh Committee thought that the nation’s residents also needed to bear some obligations to the State. As a result, as part of the 42nd Amendment of 1976, 10 essential obligations were incorporated into the Constitution as Part IVA. However, as enforcing duties on citizens would have run counter to the very nature of a democratic nation, they were given a non-judicial and unenforceable impact.

The revisions made to the Directive Principles contained both constructive and unconstructive complaints, in contrast to the other changes made about other portions. First off, the modification to Article 31C had emerged as the DPSP clause that generated the most debate. Although the 25th Constitutional Modification of 1971 added this Article, the latest amendment broadened its scope. Previously, this clause had the effect of making a legislation that was legitimate under Articles 39(b) and 39(c) of the Constitution, even though it violated the people’s fundamental rights.

The addition of Article 39-A and the modification to Article 39(f) of the Constitution is two further DPSP improvements that the community praised. According to Article 39-A, free legal assistance must be given to the less powerful members of society in order to prevent injustices that arise solely from economic or social backwardness. Article 39(f), which had previously been in place, was changed to safeguard children and young from being exploited and morally and materially abandoned.

The borders of parliamentary constituencies could not be changed according to the 42nd amendment until the first census following 2000, or 2001, which was 26 years after the amendment, was passed. Additionally, it halted the reallocation of the reservation to women, SCs, and STs during the same time frame. Prior to this change, Article 82 mandated the redrawing of parliamentary and state legislative districts every 10 years, following each census, in accordance with the information gathered.

This amendment only added a statutory provision to a long-standing practice in the nation—it didn’t actually alter anything. When we examine the structure of power in the nation, the Prime Minister is viewed as the real leaders while the President as the nominal constitutional head of state. Even though this practice is not governed by any clause of the Constitution or any other law, the President used to follow the recommendations provided by the cabinet prior to the revision to Article 74.

Following the state of emergency, nationwide general elections were held in 1977, and the Janata Party coalitions beat Congress. Mr. Morarji Desai served as the head of the newly established government, and their main responsibility was to restore the Constitution to its pre-emergency state. However, the new administration and legislature did not intend to roll back all of the Constitution’s amendments. As a result, the 42nd amendment was addressed by the 43rd and 44th Amendment Acts of 1977 and 1978, respectively. The High Courts and Supreme Courts now have the prior authority, “Internal Unrest” has been replaced with “Armed Rebellion,” and other important modifications have been made as a result of these amendments.

Read about: Constitution Day of India

Even though this amendment is regarded as the most contentious in the history of the Indian Constitution, several of its provisions have remained in place for years and are still in force today because they are viewed as advantageous. For instance, it is thought to be desirable for both individuals and communities to have free legal aid policies, safeguard children and the environment, and uphold fundamental duties. But this amendment has a negative image with it because of its impact and a number of other factors.

Read about: Regulating Act of 1773

Q) What are the aims of 42nd constitutional amendment?

Ans. Two aims of 42nd amendment act are – to reduce the power of the Supreme Court and the High Courts for the validity of constitutional laws. To lay down the fundamental duties for the citizens of the nation.

Q) Why is 42nd amendment act called the mini Constitution?

Q) Why is 42nd amendment act called the mini Constitution?

Ans. The Supreme Court ruled that two amendments to the constitution adopted by the 42 Amendment Acts of 1976 were invalid in the Minerva Mills Case (1980). The Indian Constitution’s article 368 was amended to reflect these amendments. This decision bolstered the doctrine of fundamental structure.

Q) Which subject was transferred from the state list to the concurrent list by the 42nd amendment to the Constitution?

Ans. The 42nd Amendment Act was enacted in 1976, reorganizing the Seventh Amendment to ensure that the subjects of the State list such as education, forestry, wildlife and bird protection, the administration of justice, and weights and measures were transferred to the Concurrent List.

What are the aims of 42nd constitutional amendment?

Two aims of 42nd amendment act are – to reduce the power of the Supreme Court and the High Courts for the validity of constitutional laws. To lay down the fundamental duties for the citizens of the nation.

Why is 42nd amendment act called the mini Constitution?

Why is 42nd amendment act called the mini Constitution?

Which situation led the Supreme Court to declare the 42nd Amendment Act void?

The Supreme Court ruled that two amendments to the constitution adopted by the 42 Amendment Acts of 1976 were invalid in the Minerva Mills Case (1980). The Indian Constitution's article 368 was amended to reflect these amendments. This decision bolstered the doctrine of fundamental structure.

Which subject was transferred from the state list to the concurrent list by the 42nd amendment to the Constitution?

The 42nd Amendment Act was enacted in 1976, reorganizing the Seventh Amendment to ensure that the subjects of the State list such as education, forestry, wildlife and bird protection, the administration of justice, and weights and measures were transferred to the Concurrent List.