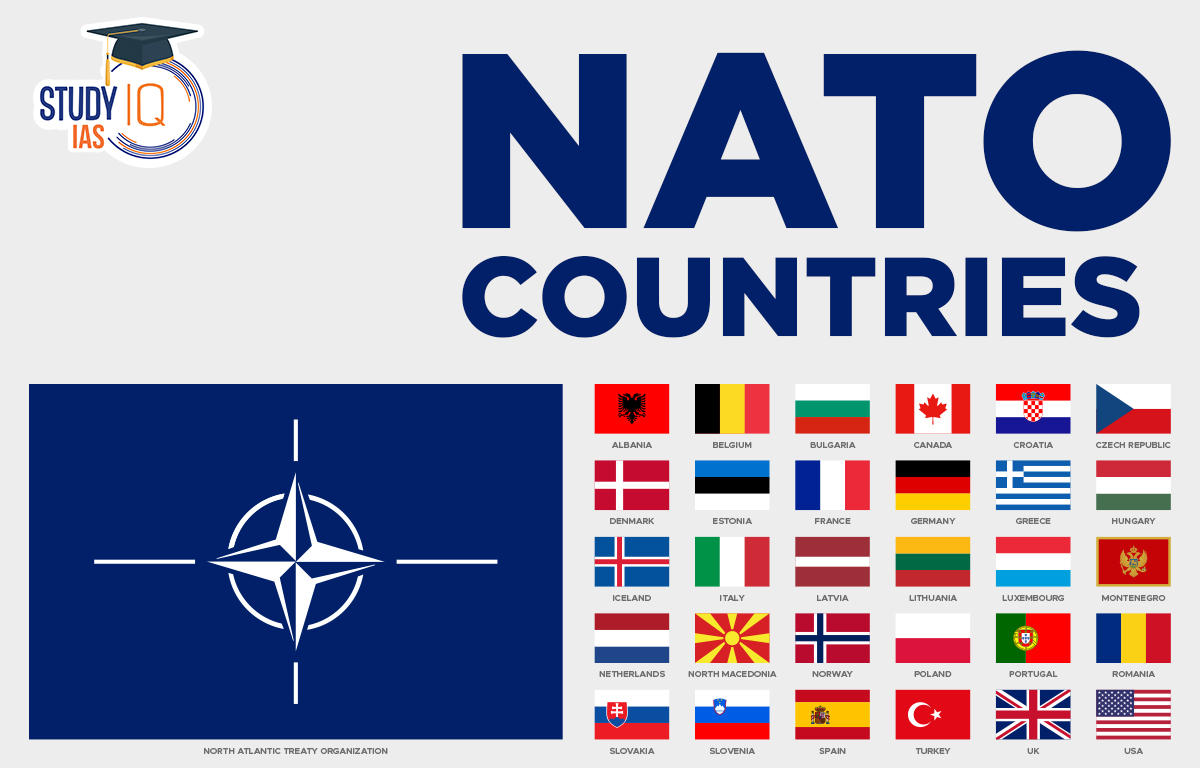 NATO is a security alliance consisting of 30 countries from North America and Europe that were established in 1949 with the signing of the Washington Treaty. NATO is the abbreviation of the North Atlantic Treaty Organization. The main objective of NATO is to protect the independence and security of the Allies via political and military action. NATO continues to be the transatlantic community’s major security tool and a representation of its shared democratic values. It serves as a realistic link that binds North American and European security together indefinitely. NATO enlargement has furthered the U.S. vision of a Europe whole, free, and at peace.

Read about: International Organizations and their Headquarters

There are 30 NATO countries at present. Here is the complete List of NATO Countries:

For a better understanding, refer to the following NATO Countries Map below:

Read about: Famous Indian Personalities and their Nicknames

NATO encourages democratic principles and gives its members the opportunity to consult and work together on defence and security-related matters in order to solve disputes, foster trust, and, ultimately, minimize conflict.

NATO is dedicated to resolving conflicts through peaceful means. It has the military might to conduct crisis-management operations if diplomatic attempts are ineffective. These are carried out on their own or in collaboration with other countries and international organisations in accordance with a United Nations mandate or the collective defence provision of the Washington Treaty’s Article 5 of NATO.

NATO is dedicated to the idea that an attack on one or more of its members constitutes an attack on all of them. This is the collective defence principle, which is outlined in Washington Treaty Article 5 of the agreement. In reaction to the 9/11 terrorist attacks in the United States in 2001, Article 5 has only been used once so far.

North American and European countries are members in NATO. It creates a special connection between these two continents, allowing them to consult, work together on security and defence issues, and coordinate international crisis management activities.

Read about: Countries and Capitals

NATO collaborates with 40 non-member countries on a variety of political and security-related matters. Many of these countries participate in operations and missions that are headed by NATO and actively pursue communication and practical cooperation with the Alliance. Additionally, NATO collaborates with a wide range of international organisations. Partner countries do not have the same power to make decisions as members.

Q. What is NATO stand for?

Ans. NATO is the abbreviation of the North Atlantic Treaty Organization.

Q. Is India part of NATO?

Ans. No, India is not part of NATO.

Q. How many countries comes in NATO?

Ans. NATO is an organization which comprises 30 member countries.

What is NATO stand for?

NATO is the abbreviation of the North Atlantic Treaty Organization.

Is India part of NATO?

No, India is not part of NATO.

How many countries are in NATO?

NATO is an organization which comprises 30 member countries.