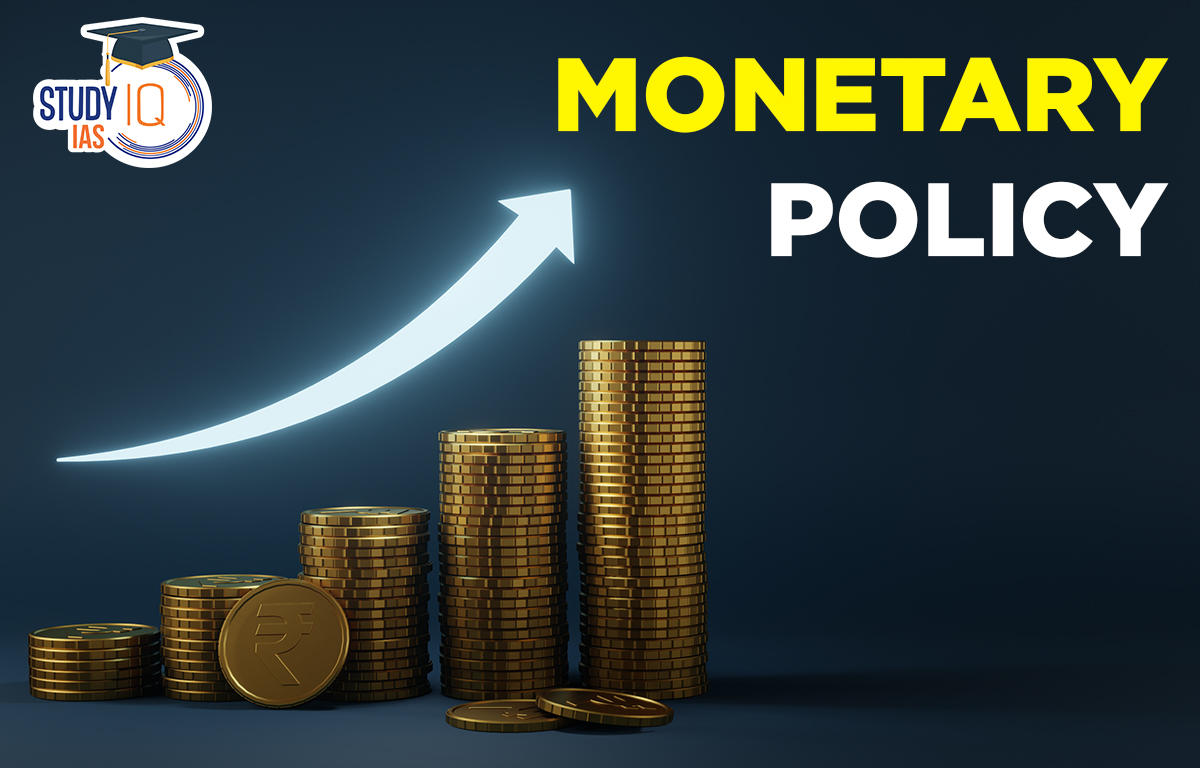 Monetary Policy: Under the terms of the RBI Act, this monetary policy was developed in 1934. This strategy, which can be either contractionary or expansionary, differs from fiscal policy, which controls the nation’s taxes and overall spending. Expansionary policy is used when there is a sudden increase in the overall amount of money. Contractionary policy is used when there is a slower rate of growth or decline in the money supply.

The central bank uses monetary policy, a procedure, to control the money supply in order to accomplish particular objectives including preventing inflation, preserving a fair exchange rate, generating employment, and fostering economic progress. Changing interest rates through open market operations, reserve requirements, or foreign exchange trading is part of monetary policy, whether it be directly or indirectly. Conducting monetary policy is the responsibility of the Reserve Bank of India (RBI). The Reserve Bank of India Act, 1934 specifically mandates this obligation.

The policy interest rate needed to hit India’s inflation objective is now decided by the Monetary Policy Committee. The Central Government appoints the six members of the MPC (Section 45ZB of the amended RBI Act, 1934).

At least four meetings of the MPC must be held annually. Quorum for the MPC meeting is four participants. In the event of a tie, the Governor has a second or casting vote in addition to each MPC member’s one vote. Each MPC meeting ends with the publication of the resolution that was approved.

Every six months, the Reserve Bank is obligated to produce a report called the Monetary Policy Report that explains the causes of inflation and projects it for the following 6 to 18 months.

1. The Neutrality of Money

The primary proponents of the neutral money objective of monetary policy include several outstanding economists including Wick Steed and Robertson. The policy states that the government must aim to prevent money from being aligned with the economy of the nation. Economic turbulence can result from any shift in currency. They contend that altering any policy element will negatively impact the nation’s overall economic situation.

They further contend that rigorous adherence to the neutral monetary policy will minimise cyclical variations and prevent trade cycles, inflation, and deflation in the nation’s economy. The authorities in this place maintain a stable currency. The primary goal of this Monetary Policy objective is to maintain absolute stability in the money supply.

The conventional goal of monetary policy authority is exchange stability. One of the key goals of the Gold Standard for various nations was this. These movements served to automatically adjust any imbalances or changes to the amount of money. Unpredictability in the conversation rates will result in gold withdrawals or inflows, upsetting the undesirable payment balance.

As a result, stable currency rates are crucial for international trade. Therefore, the main goal of monetary policy is to stabilize and manage the external changes that are occurring in a nation. Avoiding factors that could lead to exchange rate instability is crucial.

Prices that remain steady boost public trust and eliminate cyclical volatility. Thus, it promotes economic equality and helps people appreciate the importance of business activity. As a result, the community experiences an overall wave of welfare and wealth that is beneficial to everyone.

People who were working were fired as a result of the unexpected rise in unemployment during the Great Depression, which led to widespread unemployment throughout society. It is acknowledged to be both economically wasteful and socially hazardous. As a result, it was also stated as the primary goal of monetary policy. Currently, it is also referred to as full employment, which could have a direct impact on the stability of the exchange rate and pricing. If both of these things operate together, everything will run more smoothly.

They also consider those who worked for a period of time before losing their position to be employed. Following the completion of the goal of full employment, monetary policy must work toward price balancing. Some of the ways the policy can be applied are listed below:

6. Stability in the Balance of Payments

Another goal of monetary policy is the balance of payments. It was first made available after the war. This monetary policy objective’s primary goal stems from the problem with global trade’s lack of international liquidity. It was believed that the increase in the payment balance deficit was decreased. Many less developed nations reduce their imports, which negatively impacts the economy and development of the nation. Consequently, this goal brings about a balance in the payments.

One of the most often employed instruments of monetary policy, it is also known as CRR. The Reserve Bank of India must retain a set portion of the back deposits with the banks as a balance or reserve. In 1990, the CRR was 15%; by 2002, it had dropped to 5%. Additionally, the CRR is 4% at the moment.

Every financial institution is required to keep a specific amount of liquid assets on hand at all times. The Statutory Liquidity Ratio refers to this. In the same way as precious metals and bonds such as silver, gold, and diamonds are held in non-cash forms, so are these assets. In December 2019, the SLR was 18.25%.

The discount rate is one of its other names. It is the interest that the Reserve Bank of India levies on loans and other financial assistance given to banks. Credit volume will decrease and there will be less money available if the bank rate rises. The bank rate was 5.40% on December 31 and is still in effect today.

This particular monetary policy tool gives the Reserve Bank of India access to advance knowledge regarding bank lending up to a predetermined threshold. Consequently, this forces the banks to give a specific loan to the industries.

In order to establish a statutory and institutionalized structure for a monetary policy committee to achieve price stability while keeping growth as a goal in mind, the Reserve Bank of India Act of 1934 was changed by the Finance Act of 2016. The committee is in charge of determining the benchmark policy rate (repo rate) required to maintain inflation within the designated target level.

The main objective of monetary policy is to balance the supply and demand of money. As the economy expands, so does the demand for money. The central government increases the money supply proportionately to the increase in demand to prevent inflation.

In order to increase the amount of money in circulation in the economy, this policy lowers interest rates, encourages central banks to purchase government securities, and reduces bank reserve requirements. An expansionary stance lowers unemployment while enhancing trade and consumer spending. An expansionary monetary policy’s primary goal is to encourage economic growth, but it may also lead to increased inflation.

A contractionary monetary policy aims to reduce the amount of money in the economy. Increased interest rates, the sale of government bonds, and increased bank reserve requirements can all be used to achieve this. When the government wants to control inflation, it employs a contractionary strategy.

Q) What are the 3 monetary policies?

Q) What are the 4 monetary policies?

Q) What is monetary policy and why is it important?

Ans. There are two main kinds of monetary policy: contractionary and expansionary.

What are the 3 monetary policies?

What are the 4 monetary policies?

Central banks have four main monetary policy tools: the reserve requirement, open market operations, the discount rate, and interest on reserves. 1 Most central banks also have a lot more tools at their disposal.

What is monetary policy and why is it important?

There are two main kinds of monetary policy: contractionary and expansionary.