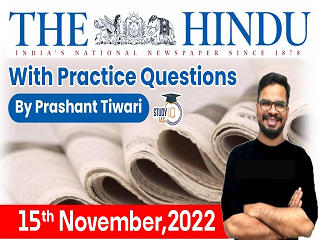 What is the constitutional status of Religious Conversion in India?

The following are exempt from these provisions:

Q) Consider the following statements about the Collegium system:

Q) Who is the founder of the Indian space programme?

Q) What is the ‘Greenhouse Gas Protocol’?

(a) It is an international accounting tool for government and business leaders to understand, quantify and manage greenhouse gas emissions.

(b) It is an initiative of the United Nations to offer financial incentives to developing countries to reduce greenhouse gas emissions and to adopt eco-friendly technologies.

(c) It is an inter-governmental agreement ratified by all the member countries of the United Nations to reduce greenhouse gas emissions to specified levels by the year 2022.

Q) Which one of the following is the best description of ‘Vikram-S’, that was in the news recently?

Q) “Earn while you learn scheme needs to be strengthened to make vocational education and skill training meaningful.” Comment. (150 Words)