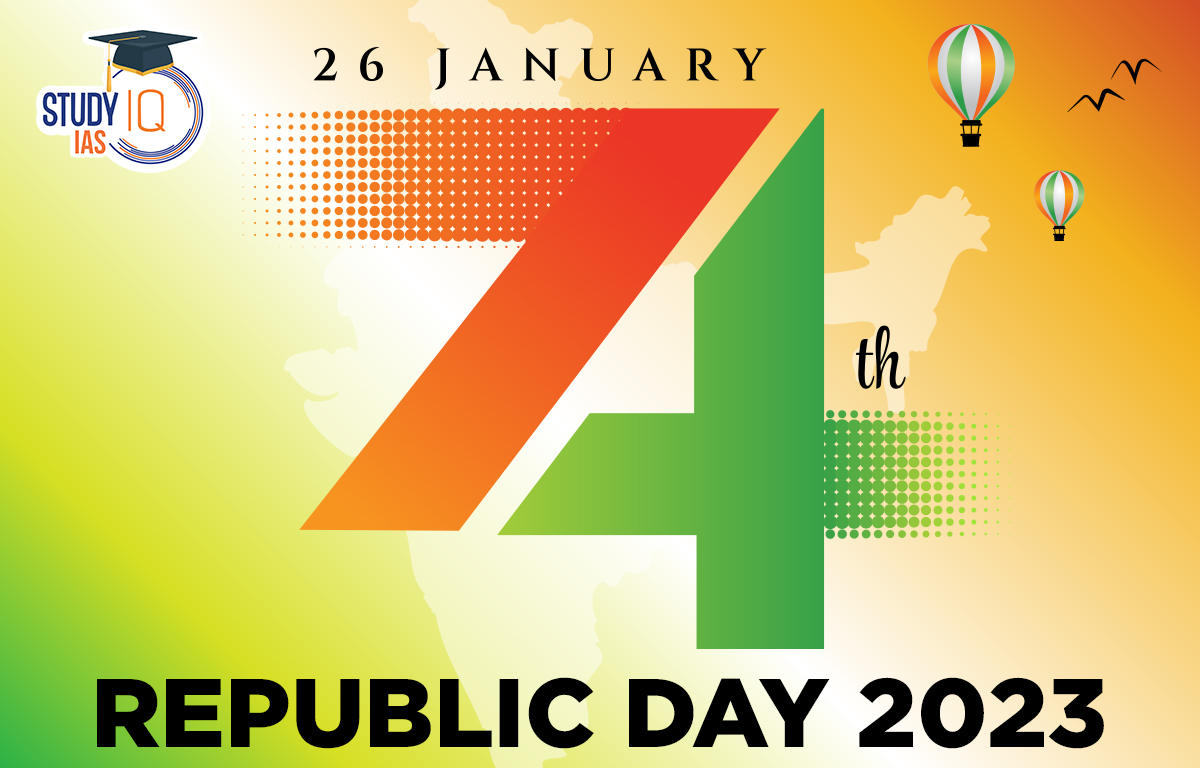 India observes Republic Day as a national holiday to commemorate the 26th of January 1950, the day the Indian Constitution went into effect it replaced the Government of India Act 1935 as the country’s governing law, transforming India into a republic distinct from the British Raj. On January 26, 2023, India will commemorate its 74th Republic Day 2023.

The constitution was approved by the Indian Constituent Assembly on November 26, 1949, and it became operative on January 26, 1950. The Indian National Congress issued the Declaration of Indian Independence on January 26, 1930, hence that day was chosen as Republic Day.

The Republic Day 2023 Celebration highlight is the sizable parade that features cultural, historical, and military performances and is held in the capital city of New Delhi. Prior to the march, the Prime Minister pays tribute to the fallen troops by placing a wreath at the Amar Jawan Jyoti, an arched war memorial.

There are still a few smaller parades, cultural activities, community celebrations, and private parties taking place across the country, even if the majority of businesses, schools, and government buildings are closed. On January 29, the festivities come to a formal close with the Beating Retreat Ceremony in New Delhi, where bands from the Indian Army, Navy, and Air Force perform.

The first day of Parakram Diwas will be dedicated to celebrating Netaji Subash Chandra Bose’s 126th birthday. The military tattoo and the tribal dance festival Aadi-Shaurya-Parv Parakram ka will be held to commemorate it. The event is placed on January 23 and 24, 2023, at Jawahar Lal Nehru Stadium in New Delhi.

The Ministry of Tribal Affairs and the Ministry of Defense together organised this event. The Indian Coast Guard’s coordination agency is also involved. There will be 10 military tattoos as well as 20 tribal dance performances.

The Vande Bharatam dance was presented by the Ministry of Culture as a part of Republic Day 2023. The seven zonal cultural centres conducted earlier competitions from which the dancers were chosen. The panel selected 503 dancers to participate in the major cultural spectacle during the Republic Day parade. The theme for this event is ‘Nari Shakti.’

Veer Gatha was one of the initiatives that were introduced at Azadi ka Amrit Mohatsav. It was a special initiative designed to educate kids about the sacrifices made by the armed services.

There is a selection process that determines Super-25 champions in the contests that were reviewed. On January 25, 2023, they will receive congratulations and take part in the Republic Days parade.

The Jan bhagidari theme will be presented at the Gyan Path in Red Fort, New Delhi, by the Ministry of Tourism. The shows will go on from January 26th to January 31, 2023. Military bands, cultural displays, all-Indian food courts, and bazaars selling homemade handicrafts will all take part in it.

However, the country did not yet have a permanent constitution; instead, its judicial system was based on a modified version of the colonial Government of India Act of 1935. On August 29, 1947, a motion was put out to create the Drafting Committee, with Dr. B. R. Ambedkar serving as its chairman, in charge of creating a permanent constitution.

On Independence Day, India remembers the end of British rule, while on Republic Day, it marks the adoption of its constitution. On November 4th, 1947, the committee presented a draught constitution to the Constituent Assembly. The Assembly met for 166 days in public sessions that spanned two years, 11 months, and 18 days before adopting the Constitution.

Who will be the Chief Guest of Republic Day 2023?

Why the Republic Day celebrated?

It is celebrated because the Constitution of India was adopted on 26th January 1950.

How many times did it take to frame our constitution?

The Assembly met for 166 days in public sessions that spanned two years, 11 months, and 18 days before adopting the Constitution.