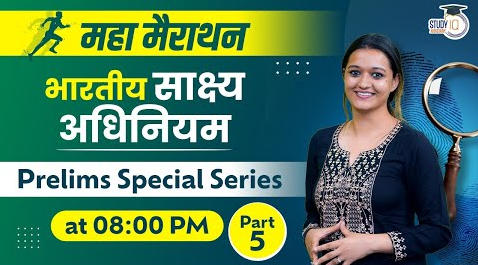 Q1. The principle on which a dying declaration is admissible under the Indian Evidence Act, 1872 is indicated in the legal maxim.

Q2. A dying declaration under section 32 of the Indian Evidence Act is admissible in evidence :

Q3. For the admissibility of a dying declaration, it is not necessary that:

Q4. A woman is raped and makes statement that A raped her. Two days later she commits suicide. Her statement regarding rape is

Q5. ‘A’ an injured person went to police station himself and lodged the First Information Report(F.I.R.) at the police station. Thereafter ‘A’ died due to injuries recorded in the first information report. Which is dying declaration under these facts and circumstances?

Q6. About six months before he was murdered the deceased wrote a letter to S.P., Jabalpur asking for protection and stating that he apprehended injury from“ A and was in fear of his life. The letter is admissible under Section-

Q7. Which of the following will be an inadmissible dying declaration?

Q8. ‘X” sues “Y’ for Rs. 1 Lakh and relies on entries in his account books showing “Y’ to be indebted to him in this amount. To prove the debt

Q9. Which Section of the Indian Evidence Act deal with the proof of customary practices ?

Q10. The principle of ‘res judicata’ is provided in which of the following section of the Indian Evidence Act?

Q11. ‘A’ prosecutes B’ for stealing a cow from him. “B’ is convicted. ‘A’ afterwards sues “C’ for the cow which B had sold to him before his conviction. The judgment against B is:

Q12. Evidence Act- “Judgment of a Civil Court is binding on the Criminal Court under all circumstances”. This statement is

Q13. Under which section of the Indian Evidence Act, the expert opinion is relevant?

Q14. An Expert under Evidence Act is a person

Q15. Even a”student“ may be treated as an expert un-der Section 45 of the Indian Evidence Act, 1872. It was laid down by the Supreme Court in

Q16. The report of a Medical Officer stating the injuries of the victim is:

Q17. The opinion of expert may be obtained under section 45 of the Evidence Act in relation to :

Q19. B’, C’ and ‘D’ never saw ‘A’ writing. But they give their opinion about the handwriting of “A’. The opinion of which one is relevant?

Q20. The ‘relationship’ in Section 50 of the Evidence Act means:

Q21. In criminal cases, under which Section of the Indian Evidence Act, the previous good character of the accused is relevant?

Q22. Which one of the following section of the Evidence Act provides that previous bad character of the accused is not relevant in criminal proceedings?

Q23. Which provision of Indian Evidence Act stipulates that the fact of a woman being habituated to sexual intercourse will not be relevant on the issue of consent in a prosecution for rape or outraging the modesty of the said woman?

Q24. Relevancy and admissibility under the Indian Evidence Act, 1872 are

Q24. The question between ‘A’ and B’ is, whether a certain deed is or is not forged. ‘A’ affirms that it is genuine,”B’ that it is forged

Q25. In the trial of murder of ‘B’ by ‘A’, which fact is not relevant in the following?

Q26. A is tried for the murder of B by poison. The fact that before the death of B, A procured poison similar to that which was administered to B is:

Q27. Tape-recorded conversation is admissible in evidence if