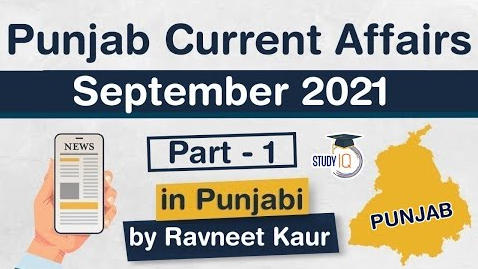 Q.) Punjab State Government had made a budgetary provision of Rs. _______Cr. for the year 2021-22 for complete payment of the balance amount of cane growers.

Q.) All India Civil Services Badminton, Table Tennis and Lawn Tennis Tournaments is going to be held at:

Punjab government is conducting trials on September 9 to select state teams for the All India Civil Services Badminton, Table Tennis and Lawn Tennis Tournaments, scheduled for September 24, 2021, at New Delhi.

Q.) The holy “bir” of Guru Granth Sahib was brought to Sri Harmandir Sahib by 5th Guru Sri Guru Arjan Dev Ji in 1604 and ________was appointed as Head Granth Sahib.

Q.) Punjab has demand for declaring ______as a district is already under consideration and a final decision would be taken after due consideration of various issues involved.

Batala’s historic importance and its connection with Guru Nanak Dev, who had married Mata Sulakhni in Batala in 1487.

Q.) National Nutrition Week is celebrated from 1 to 7 September and this year 2021 theme was:

It spreads awareness about nutrition, its importance in our lives, and how to curb the problem of malnutrition. It is celebrated from 1 to 7 September.The theme for National Nutrition Week 2021 is “Feeding smart right from start”.

Q.) Which of the following is currently India’s only airport which is directly connected with 2 airports in the UK?

Birmingham in the UK, Sri Guru Ram Das Jee International Airport Amritsar is now set to get directly connected with its third destination in Europe by Air India.

With the resumption of Rome flight, it will be the only airport in India after Delhi to be directly connected with a total of 3 destinations in Europe by the Indian national carrier Air India.

Q.) A Memorandum of Understanding (MoU) was signed between ______and the American Chamber of Commerce in India (AMCHAM India)  for mutual cooperation on Investment Promotion and Ease of Doing Business in state  for US Member Companies during 29th AGM of the AMCHAM India.

Established in 2013 by the state government, the Punjab Bureau of Investment Promotion (Invest Punjab) is a single point of contact for facilitation of investors who are looking to set up a business in Punjab.”Invest Punjab has been rated as the ”top-performing” state IPA by the Government of India.

Q.) Tung Dhab Drain seen in news is located in which district?

Lok Sabha Member Mr. Gurjit Singh Aujla  called upon the team of Environmental Experts from Mumbai and Water Supply and Sewerage Board to solve the problem of Tung Dhab Drain in the city which is causing a lot of problems to the people due to pollution.

Q.) Which of the following mission in Punjab is a public private partnership that brings in the best global investors and experts to catalyze start ups making Punjab one of the top three States in innovation?

Mission will unleash Punjab’s growth potential and create a thriving economy by generating jobs and inviting investment. The Mission will mobilize a global pool of ambassadors and partners for investment, mentorship and market acces

Q.) Who is appointed as new Governor of Punjab?

Q.) World Suicide Prevention day observed on ______September every year to raise awareness of the scale of suicide around the world and the role that each of us can play to prevent it.

It is to commemorate the bravery of Company Quarter Master Havaldar Abdul Hamid PVC and to provide training to the youth of Punjab for selection in Military and Para-military Forces.

Q.) September 9, 2021, marks the 56-year anniversary of Battle of Asal Uttar, one of the largest tank battles fought during Indo-Pak War of _______which resulted in victory due to fierce battle put up by Indian Army, their outstanding valour and better strategy.

The battle also witnessed the personal bravery of Company Quarter Master Havaldar Abdul Hamid, 4th Grenadiers, who was honoured posthumously with the Param Vir Chakra for knocking out several enemy tanks with a recoilless gun, reminisced the Chief Minister.

Q.) Red Rot fungus is a disease of:

Taking swift cognizance of the Sugarcane crop infected by Red Rot fungus in some parts of the state, the Cooperation Minister S. Sukhjinder Singh Randhawa asked the Deputy Commissioners of Gurdaspur and Jalandhar to immediate conduct the survey to assess the damage likely to be caused thereof and suggest remedial measures to prevent its further spread.

Q.) Which of the following district has taken a new leap in e-service pendency which means that there is no service pending?

Deputy Commissioner said that in order to reach this position, various departments have made a commendable effort in e-Seva Pendency Nil with all their hard work and dedication, due to which Gurdaspur has secured this position.

Under the Punjab Service Act 2018, the district administration was always trying its best to provide services to the people in a transparent manner and it was always their priority not to visit the public offices.

Q.) Punjab Department of Agriculture and Farmers’ Welfare had been providing _______per cent subsidy on Super Seeder.

Kulwant Singh of Jansui village, who has been successfully cultivating about 30 acres of land under his ownership and on lease, without burning straw for the last three years.

Q.) A function was organized at Gurdwara Saragarhi Sahib______ in memory of the martyrs of the Saragarhi war.

Recalling these 21 brave Sikhs who fought against 10, 000 Afghans, he said that there was a long list of martyrs in the Sikh community from which the present generation should be inspired to join the history of religion.

Q.) Which of the following organization had included Saragarhi amongst the eight greatest battles of the world?

Detailed Project Report regarding the war memorial of Saragarhi is ready.

Q.) Battle of Saragarhi was fought in which year?

22 soldiers of the 36th Sikh stationed near Samana ridge (now in NWFP Pakistan), who laid down their lives after a fierce battle following an attack by nearly 10, 000 Afghans on September 12, 1897.

Q.) In order to give further boost to the rural infrastructure development ,the state has prioritised projects to the tune of Rs _______crore from the National Bank for Agriculture and Rural Development (NABARD).

Q.) Cargo complex at international airport in ______will be opened this november.

The much-awaited cargo complex at international airport in Mohali will be made operational by this November while a mega milk processing plant at Bassi Pathana in Fatehgarh Sahib district will be opened by this month end.

Q.) ‘Road Victims Memorial’ is inaugurated in which of the following district?

Q.) Who is the Chairperson of Punjab Women’s Commission?

Q.) Stories like Koi ikk sawaar, Sawer hon tak are written by which of the following writer ?