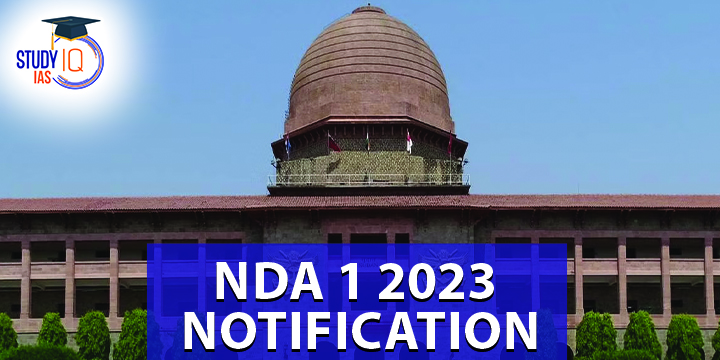 The Union Public Service Commission’s official website will provide a link for the online UPSC NDA 1 2023 application soon. Candidates must successfully apply online for the NDA exam in order to participate in the process. Candidates are highly encouraged to submit their application forms before the last date because no forms will be accepted after the window closes. Interested candidates should read the general instructions for submitting the form below. Steps to fill the application form are:

All of the papers will only have objective-type questions. The mathematics paper and Part “B” of the general ability test will be provided in both Hindi and English. The pattern of the written exam of NDA 1 2023 is given below in the table:

The SSB interview round is divided into two stages: stage I and stage II. To appear for stage II, a candidate must have passed stage I.

The applicants applying for the exam should make sure they meet all requirements for entrance to the examination. The commission will only be admitted purely on a provisional basis at all examination levels if the candidate meets all the necessary eligibility criteria. Before submitting the application form, those who are interested in applying must review the eligibility requirements.

A candidate must be unmarried male or female and must be :

To take the NDA exam and proceed on in the recruiting process, candidates must have the necessary qualifications. The table below illustrates the specifics of the candidates’ educational requirements.

On April 16, 2023, the Union Public Service Commission (UPSC) will conduct the NDA 1 2023 exam in various centers across India (Sunday). For complete list of the NDA Exam Centers, refer the following table:

For the convenience of the admitted applicants, the Commission will update the e-admit card on its official website. The accepted candidates are recommended to print a copy of their e-admit cards before the examination. The accepted applicants must present a printout of their e-Admit Card and a photo ID card listed on the e-Admit Card at the location designated for the Examination in order to appear in it. The e-admit card will be released two weeks before the examination.

Ans. Admission to courses starting in January requires passing the NDA 1 2023 exam. For admission to courses starting in July, the NDA 2 2023 exam is held.
Q. Does the NDA syllabus change every year?
Ans. NDA 1 2023 Syllabus contains no changes from NDA Syllabus 2022. 10+2 level questions will be asked.
Q. Can an NDA officer become an IAS?
Ans. Yes, you can take the UPSC exam after being selected into the NDA. The candidate must possess a graduate degree in a subject of study that has been approved by the Government of India. The applicant must be a citizen of India and at least 21 years old, and may not be older than 32.
Q. What is the date of the NDA exam 2023?
Ans. NDA 1 2023 exam will be held on 16th April, 2023 (Sunday) across the country.
Other UPSC 2023 Related Links