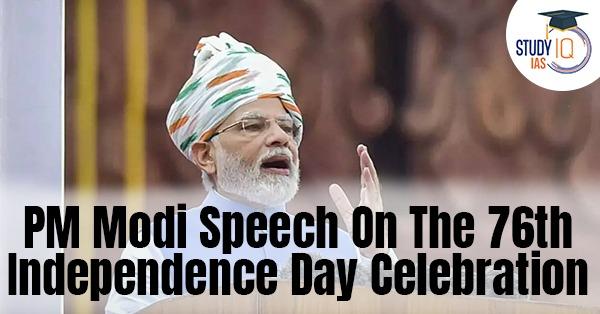 PM Narendra Modi delivered his 9th speech from the historic Red fort as The PM on the occasion of the 76th Independence Day celebration on 15th August 2022.

To commemorate 75 years of Independence the nation has been celebrating ‘Har Ghar Tiranga’ under the ‘Amrit Mahotsav’ campaign launched by the government to remember the forsaken and forgotten freedom fighters.

The PM during his speech recounted various achievements of his government and laid down a vision for the ‘Amrit Kaal’ that could fulfil the aspiration of our society.

PM addressed the aspirational society of today’s India and as he urged 130 crore countrymen to embrace Panch Pran of ‘Amrit Kaal’ as we are at the dawn of the ‘Amrit Kaal’ the golden opportunity to fulfil those aspirations was upon us.

PM said these pledges are an important part of us realising and achieving our dreams as a nation in the coming 25 years when India celebrates its 100 years of independence.

PM also highlighted some of the major achievements that give us hope to exceed expectations i.e

The pace of growth has increased in various fields from Startups to Renewable Energy, India is growing rapidly.

The PM underlined various Indian quotes and inherent wisdom that can help guide not only us but the world as a whole. i.e

PM Narendra Modi remembered Maharishi Aurobindo and the mantra he gave ‘Swadeshi to Swaraj’ to put the onus of ‘AatmaNirbhar Bharat’ on every citizen, government and unit of society. Thus, referring to it as a Mass movement. He also highlighted some crucial points regarding it i.e –

The PM stated that it was imperative to add “hail innovation” (Jai Anusandhaan) to the already given slogans of “Hail the Soldier, Hail the Farmer” (Jai Jawan Jai Kisan) and “hail science” (Jai Vigyan) as we are set to enter the 5G era. He also mentioned:-

PM hailed the “Nari Shakti” (Women Power) which is involved in various activities of Nation building i.e in the field of the judiciary, public representatives, knowledge or science, and the Police force as the PM predicted the contribution from “Nari Shakti” to be much bigger in next 25 years.

PM used the stage to send a strong message against corruption and nepotism. He mentioned the following points;-