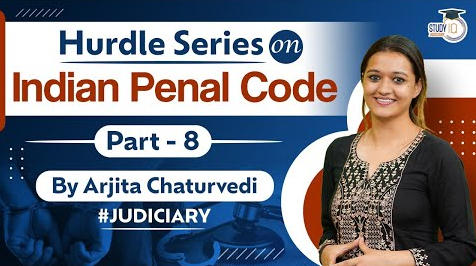 Q1. Under which section of IPC attempt to commit Robbery is punishable?

Q2. “A’ finds a valuable diamond. Not knowing to whom it belongs, ‘A’ sells it immediately without attempting to discover the owner. ‘A’ is:-

Q3. ‘Z’ dies in possession of furniture and money. His servant ‘A’, before the money comes into the possession of any such person who is entitled to, dishonestly misappropriates it. ‘A’ has committed offence under which of the following Sections of the IPC?

Q4. The accused was entrusted with some silver for the purpose of making ornaments and he dishonestly mixed copper into the ornaments. The offence committed is:-

Q5. ‘A’ is not a servant in Income-tax department but showing himself as Income-tax officer putting raid in ‘B’ business centre and gets valuable articles from A. ‘A’ commits:-

(a) Cheating
(b) Cheating by personation
(c) Robbery
(d) Fraud

Q6. ‘A’ voluntarily throws into a river a ring belonging to ‘Z’, with the intention of thereby causing wrongful loss to “Z’.

Q7. In which of the following offences ‘Mens rea‘ is not an essential ingredient?

Q8. Which of the following is not correctly matched?

Q9. How many exceptions have been provided for the offence of defamation under Section 499 of the Indian Penal Code?

Q10. Which one of the following is an illustration of criminal attempt?

Q11. A woman ran to a well stating she would jump in it but she was caught before she could reach it. She is guilty of-

Q12. A sees B drowning but does not save him. B is drowned. A has committed.

Q14. Which of the following is defamation:-

(a) X says “Y is an honest man, he never stole Z’s watch,” intending to cause it to be believed that Y did steal Z’s watch.
(b) X is asked, who stole Z’s watch? X points to Y.
(c)X draws a picture of Y running away with Z’s watch.
(d) All of the above.

Q15. In which one of the following cases Section 499and Section 500 of the Indian Penal Code, 1860 have been recently declared Constitutional by the Supreme Court?

Q16. ‘A’ and ‘B’ had been married for 10 years. ‘A’, the husband constantly physically abused his wife, B‘ The injuries were such that she needed medical treatment. On March 18, 2018, ‘A’ inflicted an in-jury on’ B’s hand, which led to it being fractured. In this context, which of the following statements is accurate :