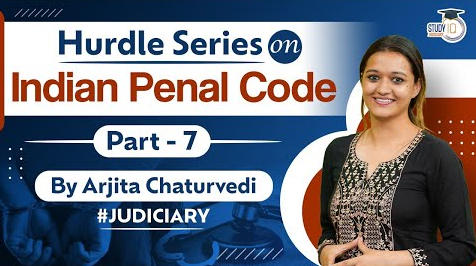 Q1. Imputations, assertions prejudicial to national integration have been provided under which of the following section of the Indian Penal Code?

Q2. Which one of the following sections of the Indian Penal Code deals with vicarious liability?

Q3. When two or more persons fight in a public place and commit breach of peace, they commit

Q5. Which one of the following is an Indian coin according to Section 230 of the IPC?

Q6. Disclosure of the identity of a victim of rape is punishable under which section of IPC?

Q10. A denied food to his wife B for several days by keeping her confined in a room with an intention to accelerate her death. B ultimately managed to escape. In this case

Q11. ‘A’ without any excuse fires a loaded cannon in to a crowd of persons and kills one of them. Although he may not have had a premeditated design to kill any particular individual. ‘A‘ committed offence of ……

Q12. In Rex v. Govinda the points of distinction between the provisions of the following sections of the IPC were explained:-

Q.13 Under which of the following cases, Supreme Court for the first time has reaffirmed the distinction between culpable homicide and murder while adopting the view suggested in Govinda case?

Q14. Which is not the essential ingredient of offence of ‘Dowry Death‘

Q15. The case of Gian Kaur v. State of Punjab is related to

Q16. “Right to live with human dignity does not include right to terminate natural life”, was held in:-

Q17. “A” with intention of causing the death of a child “B” who is below 12 years, exposes him in a desert place. Here “A“ will be liable under which section of the Indian Penal Code, 1860

Q18. A, attacks B to disfigure his face permanently. A could not do so, but causes B severe bodily pain for ten days. A commits the offence of:

Q19. ‘A’ intentionally pulls up a woman’s veil without her consent, intending or knowing it to be likely that he may thereby injure, frighten or annoy her. ‘A’ is guilty of:-

Q21. Which one of the following is not an illustration of criminal force?

Q22. ‘A’ takes some ornaments belonging to ‘B’ out of B’s possession without B’s consent with the intention of keeping it until he obtains money from ‘B’ as a reward for its restoration. ‘A’ is:-

Q23. ‘A’ handed over his watch to a watch-smith for repairing. In order to not pay the repairing charges ‘A‘ picked up his watch from the shop, when the watch-smith was not looking. In this case

Q24. ‘A’ holds ‘Z’, down, and fraudulently takes ‘s money and jewels from ‘Z’s clothes, without Z’s consent. ‘A’ is guilty of committing:-

Q25. A meets B on National Highway, shows him a pistol and demands B’s purse. B, in consequence, surrenders his purse. Which one of the following offences was committed by A?

Q26. “X’ obtains property from Z by saying that “your child is in the hands of my gang and will be put to death unless you send us ten lac rupees”. X commits:-