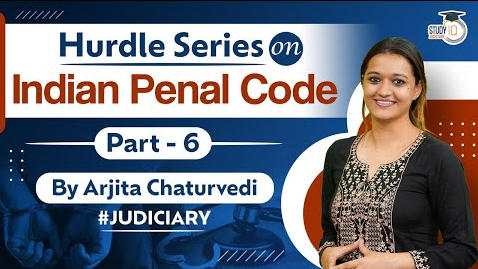 Q1. S, a wounded soldier requests his commander Y to shoot him, in order to relieve him from pain. The latter shoots him to death. X is guilty of…………

Q2. The salient feature required to be considered to assess the defence of grave provocation within the meaning of Indian Penal Code is

Q3. Sudden and grave provocation is a defence for the offence of murder. Please specify the category of the defence:

Q5. Not being armed with any deadly weapon and not expressing any intention to kill. ‘A’ tied ‘B’ to an electric pole with ropes and assaulted him as a result of which ‘B’ died. ‘A‘ committed offence punishable under Section:-

Q6. The accused inflicted injuries on non vital parts of the deceased which were not found to be sufficient in the ordinary course of nature to cause death but it was proved that he inflicted the injuries with a knowledge that with these injuries the victim was likely to die. The case would be punishable under section-

Q7. A’ had a step-child, whom he wanted to kill. For this purpose, he gave ‘B’, who was taking care of the child, a piece of cake, which had poison in it, and asked ‘B’ to feed the child the cake. B’, how-ever ate the cake himself and died as a result. Which of the following statements is accurate :

Q8. Which one of the following offences is bailable?

Q9. If in a trial for ‘causing death by negligence’ it is established that the accused had been at fault though victim had also been equally at fault:-

Q10. The offence of dowry death under Section 304-Bof the Indian Penal Code is committed where the death of a woman is caused by any burns or bodily injury or occurs otherwise than under normal circumstances within

Q11. Attempt to commit suicide is triable by:-

Q12. A’ administers poisonous drug to a woman ‘B’ to cause miscarriage. It is found that ‘B’ was not pregnant. In this case

Q13. ‘A’ exposes her child with the knowledge that she is thereby likely to cause its death. The child dies in consequence of such exposure. In such circumstances ‘A’ may be

Q14. A prostitute, suffering from communicable disease, has sexual intercourse with a man representing that she was free from any disease commits:-

Q15. Which kind of hurt is not grevious hurt.

Q17. ‘B‘ assaults ‘A‘ using a sharp edged weapon, resulting in an injury which is 6 cm long and 1/2cm deep in the right forearm of ‘A’. ‘B’ is liable to be charged for an offence punishable under:-

Q18. In which case Hon’ble Supreme Court has directed to pay minimum compensation of Rs.3,00,000/- per acid attack victim-

Q19. Voluntarily causing grievous hurt to extort property or a valuable security or to constrain to do anything, which is, illegal or which may facilitate the commission of an offence is dealt under

Q20. ‘A’, a police officer, tortures ‘B’ in order to induce “B’ to confess that he committed a crime. Under which section of IPC the police officer is guilty of an offence?

Q21. What punishment may be awarded for the offence voluntarily causing hurt to deter a public servant from his duty under Section 332, IPC?

Q22. Which one of the following sections of the Indian Penal Code relates to punishment for voluntarily causing hurt on provocation?