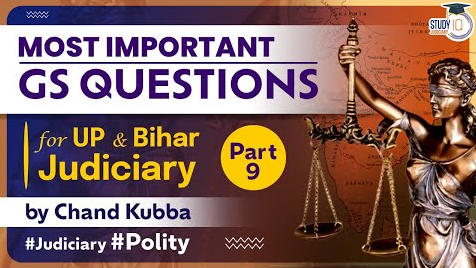 Q1. Who among the following is the chairman of the Zonal councils?

Q2. By which constitutional amendment was the legislature formed in Delhi?

Q3. For which of the following union territories the President cannot make regulations?

Q4. National Panchayat Day is celebrated on which day?

Q5. Financial emergency is related to which of the following articles?

Q6. Which Article of the Constitution mentions the Comptroller and Auditor General of India?

Q7. Who among the following is appointed as the chairman of the National Human Rights Commission?

Q8. In which year was the Central Pollution Board constituted?

Q9. Who administers the oath to the ‘Pro Tem’ speaker?

Q10. The “Speaker” of the Lok Sabha is the ex-officio Speaker of:

Q11. Who among the following administers the oath of office to the President of India:

Q12. Which article proposes to separate the judiciary from the executive under the Directive Principles of State Policy?

Q13. In which of the following cases, the Supreme Court held that the Indian Constitution has been established on the basis of a balance between Fundamental Rights and Directive Principles of Policy?

Q14. Which one of the following schedules of the Constitution of India contains anti[1]defection provisions?

Q15. Which of the following writ petition can be filed for personal liberty?

Q16. Mandamus writ is issued by the court for –

Q17. What is the difference between Fundamental Rights and Directive Principles of State Policy?

Q18. Which article of the constitution provides for equal justice and free legal aid?

Q19. Which one of the following committees recommended the inclusion of Fundamental Duties among citizens in 1976?

Q20. Which area of the country has been given special status under Article 371-J of the Indian Constitution?

Q21. Which of the following is not possible by an Act of Parliament under Article 3 of the Constitution?

Q22. The superintendence, direction and control of the conduct of all elections to the Panchayats are vested in:

Q23. Match List-I with List-II and select the correct Answer.  from the codes given below the lists:

Select the correct option from below:

Q24. The Constituent Assembly of India adopted the National Flag on which of the following dates?

Q25. How many Subjects are there in the 11th schedule of the Constitution of India?