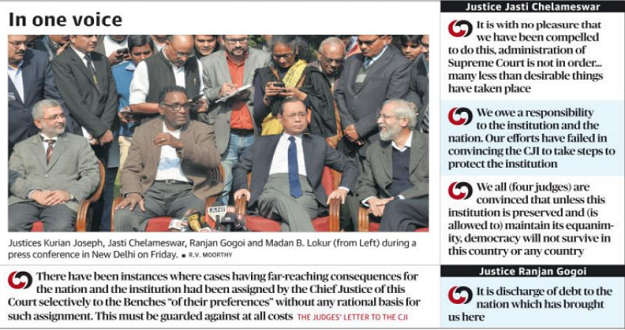 Rights in the age of big data

 After all, many trust their smartphones more than they trust their government
 B.N. Srikrishna, a former SC judge, tasked with making recommendations and drafting a data
protection law
 White paper, published
 Committee “to harness the benefits of digital economy and mitigate harms consequent to it”.
 To ensure a balance between innovation and privacy
• 1)-Big Data,
• 2)-The Internet ofThings, and
• 3)-Artificial Intelligence are here to stay and hold out the promise of welfare and innovation,
 India will have to develop a data protection law
 Framing of a line between the demands of technological innovation and individual rights
is a terrible bargain for our future.
 Hold both fundamental rights and innovation
Copyright @ Study-IQ education Be Happy, Share & Help Each Other!!!
Continue
 Fundamental right to privacy in the Puttaswamy case.
 Privacy exists as a natural right inherent in all fundamental rights of the Constitution
 An obligation on the state to take all necessary measures to protect the privacy of the individual”.
 Data protection laws should shield individuals rather than commercial interests or
technological innovation- Aadhaar project
 Sound legislation would further innovation as a social goal that serves human needs.
 Srikrishna Committee to take the benefits of past expert efforts.
 Most noticeably by the Justice A.P. Shah Committee which a little over •five years ago proposed
nine privacy principles acting on a “fundamental philosophy” of “ensuring that the privacy
of the data subject is guaranteed”.
 A.P. Shah Committee among other things recommended,“the PrivacyAct should not make any
reference to specific technologies and must be generic enough such that the principles
mechanisms remain adaptable to changes in society, marketplace, technology, & government.”

A perfect storm of uncertainty

Finance Minister will have to work with very rough revenue estimates while •finalising
this Budget 2018
The GST factor
GST Council made sweeping cuts to the GST rates that came into effect on Nov 15
and which seemed to have sharply hit tax collections.
Company •les GSTR-1 for outward supplies to other companies, and GSTR-2 for
inward supplies
It is only after matching the data in the two forms that the quantum of input
tax credits to be refunded to the companies.
Larger companies, with a turnover of more than •1.5 crore a year, had to •file their
returns for the July-Nov period by January 10
Copyright @ Study-IQ education Be Happy, Share & Help Each Other!!!
Continue
 But the Budget, of course, has to do with more than simply estimating revenue.
 It also has to do with planning expenditure
 Government is having trouble estimating its revenue for the coming year,
then its expenditure projections are going to be shaky too.
The •fiscal deficit
 Taken together, this has a bearing on the •fiscal deficit as well.
 For this year, with GDP growth expected to be slower than what was estimated in the
previous Budget
 Most of issues aren’t the government’s fault, they simply have to do with the various reforms
initiated this year.
 But the end result has been a perfect storm of uncertainity.

Page-1-Just 4.9% of higher edu teachers are Muslim
 At 4.9%, Muslim representation among teachers in higher educational institutions
in India is much lower than the community’s proportion in India’s
population (14.2%), going by the recently released All India Survey on Higher
Education for 2016-17.
 Representation of the Scheduled Castes and ScheduledTribes is also lower
 While the survey, done by the Ministry of Human Resource Development,
shows the representation of SCs at 8.3% of the total number of teachers in
higher educational institutions, ST representation is 2.2%.
 The SCs account for 16.6% of India’s population and STs about 8.6%.
 “At the all-India level, teachers belonging to the general category are more
than half, that is, 58.2% of the total number of teachers in India; OBCs follow at
31.3%
 Page-5– ISRO workhorse PSLV-C40 puts 31 satellites in space
 The Indian Space Research Organisation (ISRO)
on Friday launched its 42nd Polar Satellite LaunchVehicle
(PSLV) from the Satish Dhawan Space Centre in Sriharikota
 ISRO termed the successful launch a NewYear’s gift to the nation.
Copyright @ Study-IQ education Be Happy, Share & Help Each Other!!!
Prelims Focus Facts-News Analysis
 Page-8-New U.S. sanctions won’t hit Chabahar port project, says Iran
 New Delhi has made it clear it will not change its commitment to the connectivity venture and SEZ; President
Rouhani to visit India to announce the •final agreement
 Striking a defiant note over possible new sanctions againstTehran, Iran’sTransport Minister AbbasAkhoundi has
said the move will “isolate” the U.S., and rejected any worries that India’s Chabahar project will be affected
 Page-8-We have to do our job:Army chief
 General Bipin Rawat says it is premature to say U.S. action against Pakistan will help
India
 The Chief of the Army Sta•, General Bipin Rawat, said
here on Friday that it would
be premature to say the suspension of aid by the U.S. to
Pakistan would tip the balance in favour of India.
 Page-8– Passports will not carry address, parents’ names
 The External A•airs Ministry on Friday announced that
new passports would soon be printed without the
names of parents and the home address of the
applicant.
 “A three-member committee comprising the o•-
cials of the Ministry of External A•airs and the Ministry
ofWomen and Child Development was constituted to
examine various issues pertaining to passport applications
where mother/child had insisted that the name of the father should
not be mentioned in the passport and also relating to passport
issued to children with single parent and to adopted
children,”
 Page-12- Nepal to use Chinese Internet bandwidth
 Move ends India’s monopoly in country
 China on Friday became Nepal’s second Internet service provider, breaking India’s monopoly in pr
oviding Internet access to the Himalayan country.
 ChinaTelecom Global (CTG), a company formed in 2012, has teamed up with
NepalTelecom to provide alternative cyber connectivity to Nepal.