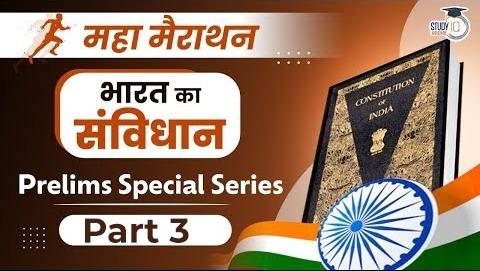 Q1. In which one of the following cases the Supreme Court has declared Article 15(5) as Constitutional?

Q2. In which case has the Supreme Court of India decided that the reservation should be less than 50%?

Q3. “Creamy layer” rule excluding the well placed members of a caste from reservation was first laid down in the case of-

Q4. Which Article of the Constitution provides for reservation in promotion for Scheduled Caste and Scheduled Tribes :-

Q5. ‘Carry forward’ rule was held to be ‘ultra vires‘ in the case of-

Q6. In which case the Supreme Court has held that the maximum limit of reservation cannot exceed 50 percent?

Q8. Fundamental Freedoms given under Article 19 of the Constitution are available only to :-

Q9. The Supreme Court has held that right to fly the National Flag with respect and dignity is a fundamental right of every citizen within the meaning of Article 19(1)(a) of the Constitution of India in the case of :-

Q11. Which one out of the following is not a Fundamental Right ?

Q12. Which one of the following is not a ground on which a reasonable restrictions on the right to freedom of speech and expression can be imposed?

(a) Freedom of speech and expression.
(b) Abolition of untouchability.
(c)Freedom of movement throughout India.
(d) Freedom to reside in any part of India

Q16. Which of the following freedoms is removed from Article 19 as Fundamental Freedom?

Q17. Which one of the following is not covered under Article 20 of the Constitution of India?

Q18. Which one of the following is the correct statement? Double Jeopardy means :

Q20. A person Y is convicted for the offence of kid-napping in 1960 and sentenced to three years of imprisonment. On release from the Tihar Jail, he is apprehended and detained for commission of murder and tried and convicted and sentenced to life imprisonment in 1990. Is this a violation of Article 20 of the Constitution of India?

Q21. In which case the Supreme Court of India held that polygraph test conducted under compulsion is violative of Article 20(3) of the Constitution ?

Q22. Doctrine of Self Incrimination enacted in Article20(3) means-

Q23. The words, ‘procedure established by law’ in Article 21 means-

(a) that due process of law must be followed
(b) a procedure laid down or enacted by a competent authority.
(c) the same things as ‘due process of law‘
(d) a law which is reasonably fair and just

Q24. The scope of expression “procedure established by law“ occurring in Article 21was expanded in the case-

Q25. In which of the following cases, the Supreme Court held that ‘right to sleep is a Fundamental Right?

Q26. “The Right to Privacy is not an absolute right” was held in following case

Q27. Which of the following is popularly known as ‘Phone Tapping’ case?