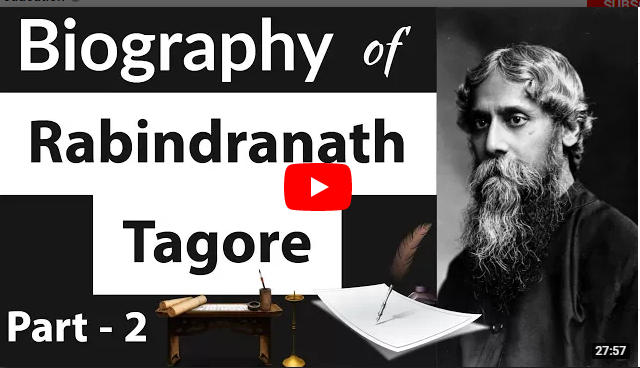 • The youngest of thirteen surviving children, Tagore  (nicknamed “Rabi”) was born on 7 May 1861 in the Jorasanko mansion in Calcutta to Debendranath Tagore (1817–1905) and Sarada Devi (1830–1875).
• His father Debendranath Tagore was a leading light in the Brahmo Samaj – a reforming Hindu organisation which sought to promote a monotheistic interpretation of the Upanishads and move away from the rigidity of Hindu Orthodoxy which they felt was holding back India.
• Debendranath Tagore also encouraged his family to learn English. Tagore’s father invited several professional Dhrupad musicians to stay in the house and teach Indian classical music to the children.
• Tagore was raised mostly by servants; his mother had died in his early childhood and his father travelled widely.

• Tagore was born in an extremely talented family.His brothers and sisters were of higher intellect which made him to follow them.
• Tagore’s oldest brother Dwijendranath was a philosopher and poet. Another brother, Satyendranath, was the first Indian appointed to the elite and formerly all-European Indian Civil Service.
• Yet another brother, Jyotirindranath, was a musician, composer, and playwright. His sister Swarnakumari became a novelist.
• Jyotirindranath wife Kadambari Devi, slightly older than Tagore, was a dear friend and powerful influence. Her abrupt suicide in 1884, soon after he married, left him profoundly
distraught for year.
• Tagore childhood was very interesting.Growing in a artistic atmosphere he developed interest in the field at an early age.he was instructed to stay in the house but outside world fascinated him. In his boyhood, he accompanied his father to Bolpur (Santiniketan). After Bolpur, they
spent a month in Amritsar and then in the Himalayas.
• Tagore largely avoided classroom schooling His brother Hemendranath tutored and physically conditioned him—by having him swim the Ganges or trek through hills, by gymnastics, and by practising judo and wrestling.
He learned drawing, anatomy, geography and history, literature, mathematics, Sanskrit, and English—his least favourite subject.
• Because Debendranath wanted his son to become a barrister, Tagore enrolled at a public school in Brighton, East Sussex, England in 1878. In 1880 he returned to Bengal and published many poetic works and many things.

• His very first poem, which appeared over his name was first published in the Amrita Bazar Patrika of 25th February, 1875. His brother Dwijendranath Tagore started publishing a monthly magazine, the ‘Bharati’.

• His long poem, ‘The Poet’s Story’, (translation of Macbeth in Bengali) first published in BHARATI. Then onwards, he regularly contributed poems and proses to the ‘Bharati’ which appeared with the imaginary name,  Bhanu Singh Thakur.
• In 1878, he accompanied his elder brother Satyendranath Tagore To England. There he had the opportunity of studying English Literature under the guidance of Prof. Henry Morley. Besides studies in Literature, he had also taken lessons in Western Music.
• In 1880, he returned to India and wrote two verse plays in Bengali, entitled ‘Valmiki Pratibha’ and ‘Kalmrigaya’. Both these plays were performed in his family-dwelling house and he played the leading role.

LITERARY WORKS AT AN EARLY AGE

• In 1882, he published his historical verseplay, entitled ‘Rudra Chakra* and a collection of his poems entitled ‘Sandhya Sangeet’. Bankim Chandra Chatterjee became very much impressed by these two. In 1883 he married 10-year-old MRINALINI DEVI.
• On 20th May, 1884, he lost his sister-in-law, the wife of Jyotindra Nath Tagore. It was a heavy shock for him as she was his boyhood companion and of the same age.He continued his works.
• On 22nd August, 1890, Rabindranath Tagore took his second voyage to England with his brother Satyendranath Tagore and from there they visited France and Italy. In 1890 Tagore began managing his vast ancestral estates in Shelaidaha(today a region of Bangladesh).
• In 1891, he started a Bengali monthly magazine entitled ‘Sadhana’. His life in ‘Silaidah’ was one of the deepest and most joyous communion with nature. His famous verse play ‘Chitrangada’ was also written during his stay there.

• He was against the partition of Bengal and condemned the suppressive policy
of the Government in the Press.

• In those days, plague spread over different parts of the country and he tried his best to make arrangements to help the sufferers.
• He also worked with the peasants to support the farming condition and mostly lived in his boat.He opposed any sort of violence and considered humanity as the greatest things which can end the war.

• Shantiniketan is a small town near Bolpur in the Birbhum district of West Bengal, India, proximately 180 km north of Kolkata(formerly Calcutta). It was established by Maharshi Debendranath Tagore, and later expanded by his son Rabindranath Tagore whose vision became what is now a university town, Visva-Bharati University.
• In 1862 he acquired this property just after the 1 year of birth.It was in  the hands of trustees that this can be used only for holy and spiritual activities.In 1901 Rabindranath Tagore expanded this and founded.

• He started traditional school there which was based on the ancient Indian education but for that he needed funds hence he sold the copyrights of his books and one of his ancestral house. and his wife sold his wedding ornaments to support this cause.

• Rabindranath Tagore had his sadest years between 1902 and 1907 as he lost many of
his near and dear ones.
• First his wife died in 1902, then in the Next year his younger daughter died, in 1905, he
lost his father and his youngest son died in 1907.
• He wrote a series of poems in memory of his wife and dedicated them to his wife
under the title ‘Smaran’.
• In this period, he became a serious novelist. He wrote his famous novels ‘Chokher Bali’ and ‘Gora’ in 1903 and 1906. respectively.

• In 1908, Rabindranath Tagore was elected President of the Provincial Political Conference held in Pabna.
• In the course of his speech delivered in the conference. he laid stress upon Hindu Muslim
unity, rural uplift, education in  villages and cleanliness.
• Song ‘Jana Gana Mana’ and was sung on  the twenty sixth annual session of the
Indian National Congress.
• In 1912, he left for Europe to make the West know the ways and methods of his
teaching.

• In London, W.B. Yeatts read translations of Rabindranath Tagore’s poems to the renowned English poets, editors and critics. In September 1913, he came back to India and was warmly received by his countrymen.
• On the 13th November the news of his winning the Nobel Prize for Literature reached India. ‘Gitanjali(Song of offerings), the book on which Rabindranath Tagore won the Nobel Prize was the first book of English translation of his poems.
• Gitanjali was a collection of hundred and three poems, translated by the poet from his various poetical works in Bengali. The Westerners considered his work to be the best literary production of the year in the whole world.
• In India, the Calcutta University honoured him by giving the degree of Doctor of Literature; atva special convocation held on 20th December, 1915. ON 3RD JUNE 1915, ‘KNIGHTHOOD’ WAS CONFERRED ON HIM.

• Mahatma Gandhi along with his wife visited Shantiniketan on 22nd February, 1915 but could
not meet him and again on 6th march, he visited Shantiniketan and met Rabindranath Tagore for the first time.
• In April 1919, the Jallianwala Bagh of Amritsar became the scene of bloodshed. In protest
against this, he gave up his title ‘Knighthood’.
• He started touring again in 1920 and Rabindranath Tagore made his voyage back to India in July 1921 by influencing the west with his brilliant speeches.
• At that time,, the movement of noncooperation was going on but he did not participate in the
movement as he was against it.

• In December 1921,that year, he entrusted to the Visva Bharati all right of his Bengali books, his library, his landed property together with the amount of the Nobel Prize.
• He again started travelling the world. Between 1878 and 1932, Tagore set foot in more than thirty countries on five continents.
• Gandhiji felt bad for seeing Rabindranath Tagore in his old age collecting funds for Visva Bharati by dance and musical performances. So Gandhiji requested one of his admirers to donate a sum of sixty thousand rupees for the Visva Bharati.
• On 7th August 1940, Sir Maurice Guryer, Chief Justice of India had the proud privilege as the representation of the University of Oxford to come to Shantiniketan and confer on Rabindranath Tagore an Oxford doctorate.
• ON 7TH AUGUST, 1941, HE BREATHED HIS LAST.
• Rabindranath Tagore feels the presence of God behind all experiences in man and that he reveals through poems. His poems reveals devotional mysticism as well as nature mysticism.
• In many of his poems, there is a constant feeling not only of the presence of God but also of   His coming to him.
• On the river Padma on Ganges, he spent wonderful days. One fine evening all things became luminous with truth to him. He found that everything was in a state of flux but tending to reach the same one goal.
• He felt that at least he had found his religion, the religion in which the God became defined in humanity and came close to him so as to need his love and co-operation.